Monday Recruiting Roundup updates you on the performance of commitments, hands you a plethora of links and catches you up on the recruitment of the best receiver in the 2013 class.

Share All sharing options for: Monday Recruiting Roundup Has Wings

Players who made noise this week:

TE/DE Jake Butt - The big-bodied target had three touchdown receptions in his team's victory this past week. Sooner or later Michigan will have Funchess and Butt on the field at the same time fielding passes from Shane Morris. Yea, that might be successful.

McDowell with a sack/fumble on the first possession I see of him on D. He’s really not fair at this level of competition.

He ended up with around 5 TFLs in one half of play.

QB Shane Morris - Not that he's making noise on the field, but he does expect to be back by the end of the season. This is news to many who expected him to be done for the remainder of the year.

Illinois Visitors and Other General Notes

The Illinois game is setting up to be a solid week for 2014 recruiting. Tremendous has a list of recruits who are expected to be there.

Michigan has quite a few All-American type of recruits in its 2013 class, and OL Logan Tuley-Tilman and DL Henry Poggi recently received their honorary Under Armour jerseys:

Tom VanHaaren of ESPN wrote a piece on LTT, who worked his way to earning countless football offers:

"It was all the drive and hustle I put in when nobody was watching," he said. "This all took me by surprise from where I cam from a year ago. This game is a real milestone in high school football if you want to be considered an elite football player."

With offers from Michigan, Alabama, Arkansas, Florida State, Ohio State and USC among others, and now the Under Armour All-America jersey in his hands, Tuley-Tillman can say with confidence that he is an elite high school football player.

Michigan also has two 2013 players in the Semper Fidelis All-American game, OL Kyle Bosch and CB Ross Douglas. I'm a bit surprised that Bosch isn't participating in one of the two bigger events, but the Semper Fi Bowl is still proof that he's a BCS-level player.

Finally, 2013 star receiver Laquon Treadwell named a top five of Michigan, Michigan State, Oklahoma State, Oklahoma and Ole Miss. Other reports have Florida and Missouri in the top five, which isn't surprising because Treadwell has been one confusing recruit throughout the process. If you asked me I'd tell you to watch out for Ole Miss and Oklahoma State, but who the hell really knows where he's leaning if he doesn't?

And thanks to Scout's incredibly horrific new layout I can't link you to the list. I've clicked on five different links to the list and they all take me to Scout's "NEXT" page, which just isn't helpful. Whoever designed the webpage and authorized the change is probably going to lose their job.

Anyway, Tremendous has a breakdown of the recruits in the top 300 to go along with their opinion on Michigan's 2014 QB situation.

Creative Recruit of the Week

2014 LB commitment Michael Ferns likes the winged helmet so much that he's making his own: 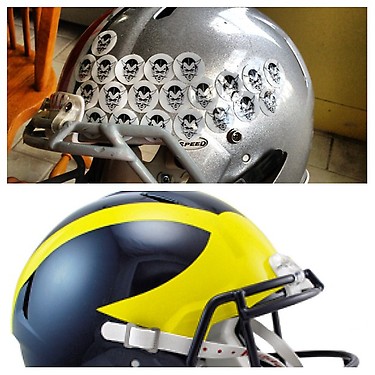 You know you're a D1 recruit when you have enough helmet stickers to recreate the winged helmet.