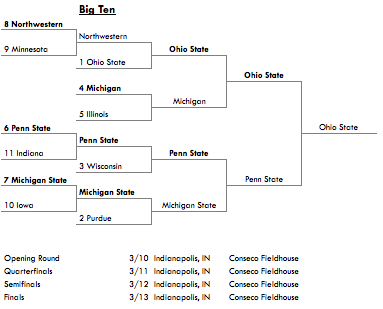 The Big Ten Tournament format changes this year, with the addition of Nebraska. The biggest change is that the 5 seed will no longer have a bye into the quarterfinals, but instead will face the lowest seeded Big Ten team. 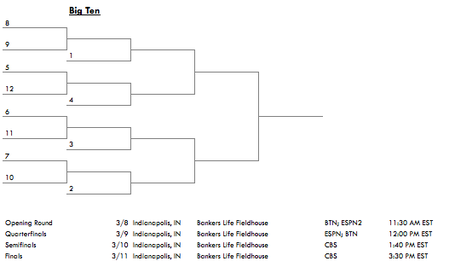 Can any Big Ten team who is on the wrong side of the bubble make progress between now and Selection Sunday, earning themselves a spot in the Big Dance a la Penn State last season? To determine that each team needs to be evaluated based on where they currently stand.

Key wins are wins against an RPI top 50 opponent; key losses are losses to any opponent with an RPI over 100. Key wins, key losses, and record against top 50 RPI teams are courtesy of StatScore.com.

Notes: The Illini began the season 10-0, with good wins over Maryland and Gonzaga. Starting with a loss to UNLV the Illini are 6-10 since then. Illinois is 1-7 in their last 8 with the lone with against Michigan State by 1. During that stretch Illinois has been outscored by an average of 5 points per game. In fact, 11 of 13 of Illinois’s conference games have been decided by single digits. The remaining schedule is a blessing and a burden for the Illini as they go on the road to face Ohio State and Wisconsin and get Michigan at home, with games against Nebraska and Iowa breaking up that run of the Big Ten's top teams. Illinois has a chance to pick up some wins, moving up not only in the Big Ten standings but also in their seeding for the NCAA Tournament. The Illini have a fairly deep team with seven players averaging at least 17 minutes per game (six averaging 20 minutes or more).

Key Number: 60.3%. On average, Brandon Paul, Meyers Leonard, and D.J. Richardson are combining for 60.3% of Illinois’s points. Despite the depth in minutes there is little depth in scoring. When Paul, Leonard, and Richardson combine for 60.3% or more of their team’s points the Illini are 7-8; compared with 9-2 when they combine for under 60.8%. Illinois flat out needs more production from other players.

Notes: Like most Big Ten teams the Hoosiers have struggled on the road. Indiana is 14-1 at home but 4-5 on the road (beat Notre Dame at a neutral site). A road win over bubble team North Carolina State looks good, as does a win over Purdue at Mackey Arena. In fact, Indiana’s worst road loss to Nebraska was by a single point. Balanced point production for the Hoosiers has been key all season, as four Hoosiers are averaging 10 points or more per game.

Key Number: 10.5. Indiana is averaging 82.6 points per game at home, but 72.1 points per game on the road. Outside of scoring 80+ at Evansville, North Carolina State, and Penn State, the Hoosiers have averaged 63.2 points per game in their last five road games (1-4 during that stretch). The NCAA Selection Committee doesn’t like to see huge differences in home play and road play. Indiana needs to be more consistent on the road; with games against Iowa and Minnesota coming up, they will have a chance to do just that.

Notes: Let’s be honest, short of a Big Ten Tournament run the Hawkeyes will not make the NCAA Tournament. Iowa does have some good wins, beating Wisconsin, Michigan, and sweeping bubble team Minnesota. But along with those good wins come the bad losses. The Hawkeyes have losses to Campbell and Clemson at home. A bigger problem for Iowa: They aren’t exactly doing great at home. The top four teams in the Big Ten have won (58-5) 92% of their home games, while Iowa has won 68.8%. Iowa’s home winning percentage isn’t exactly attractive to the NCAA Selection Committee.

Key Number: 3. As in 3-0, Iowa’s Big Ten record against their rivals Minnesota and Wisconsin. By contrast, Iowa is 2-8 against the rest of the Big Ten including losses to Nebraska and Northwestern. Unfortunately for Iowa, beating a rival isn’t a category the Selection Committee focuses on. A win over Wisconsin on the 23rd would certainly help, but the Hawkeyes are going to need more than just one win.

Notes: Any Michigan fan knows that Coach John Beilein has been successful wherever he coached. Now in his fifth season at Michigan Coach Beilein has led the Wolverines to two NCAA appearances, winning a game in each appearance. Expectations are higher for the NCAA Tournament for the Wolverines. Coach Beilein’s best seed in the NCAA Tournament was as a six seed at West Virginia; the Mountaineers made the Sweet 16 that season.

Key Number: 56.9%. Michigan is getting 56.9% of their scoring, on average, from Tim Hardaway Jr., Troy Burke, and Zack Novak. Outside of a good three-point shooting percentage --- especially from Novak (43.3% made) and Evan Smotrycz (42.1% made) --- Michigan finds a way to spread the scoring around. When Hardaway Jr., Burke, and Novak score 60% or more of Michigan’s points the Wolverines are 5-4, compared with 14-3 when they score less than 60%. The Wolverines are poised to have their best seeding in the NCAA Tournament since 1994 when Michigan was a three seed.

Notes: After starting the season 0-2 with losses to North Carolina and Duke on neutral sites, Michigan State rattled off 15 straight wins. The Spartans have the second best road record of all Big Ten teams at 5-3. More importantly, Michigan State has played exceptional defense, allowing only 58.5 points per game. Michigan State is 5-3 when they allow 65 points or more, but 16-2 when they allow less than 65.

Key Number: 14. The Spartans have appeared in 14 straight NCAA tournaments to date, currently the most of any Big Ten team (third most of any team, behind Kansas with 22 and Duke with 16). It’s a well-known fact that any player who has played four years under Coach Tom Izzo has been to at least one final four. In fact, for players like Draymond Green, Austin Thornton, Anthony Ianni, and Joe Sweeny – all seniors – have been to two Final Fours. Is a third Final Four appearance in the cards for the Spartans?

Notes: The Gophers were 12-1 in non-conference play. The gaudy record looks nice, but upon further investigation only Bucknell and South Dakota State are decent wins. The Bison and Jackrabbits are a combined 41-14, while the remaining teams are a combined 115-146. Outside of a pair of losses to Iowa, Minnesota doesn’t have any bad losses. Problem is their best win is over Indiana, who has been sliding a bit as of late. Minnesota has games against Michigan State, Indiana and Wisconsin in their last five. Winning four of the last five would certainly help the Gophers, and would assure them of no worse than a 500 record in conference play.

Notes: Nebraska has struggled in the Big XII in recent years and continues that in the Big Ten. Under coach Doc Sadler, the Cornhuskers are 100-83 overall, but just 33-60 in conference play. Losses to Oregon and Wake Forest don’t look great, but the problem has been the number of losses rather than who Nebraska has lost to. Since the 2007 NCAA Tournament 80 teams of 173 (37 at-large in 2011, 34 each year prior) made the NCAA Tournament with double-digit losses as at-large bids (76%), only 24 of those 80 teams had 12 losses or more (30%). Nebraska also has the worst home record of any Big Ten team.

Key Number: 61. Nebraska is averaging 61.0 points per game (56.2 points per game in Big Ten) – the lowest of any Big Ten team. While the Huskers have been to six NCAA Tournaments they have never won a game. Unless something happens between now and Selection Sunday, that won’t be changing this season.

Notes: As most college basketball fans know --- especially Big Ten fans --- Northwestern has never been to the NCAA Tournament. Coach Bill Carmody has been at Northwestern since the 2000-2001 season, but didn’t take the Wildcats to the postseason until 2009 when Northwestern made the NIT. Northwestern has been in the NIT the past three seasons including making it to the quarterfinals last season. Coach Carmody’s last NCAA tournament appearance was in 1998 with Princeton when the Tigers made it to the second round. Northwestern faces three potential NCAA Tournament teams in their last five games; they are 3-10 against potential NCAA Tournament teams on the season (wins: Seton Hall, Michigan State, and Illinois; losses: Baylor, Creighton, Ohio State, Illinois, Michigan, Wisconsin, Minnesota, Purdue (twice), and Indiana).

Notes: Ohio State had the nation’s second longest win streak, behind Kansas, until their loss to Michigan State this past Saturday. The Buckeyes had won 39 straight at home dating back to February 27, 2010 against Michigan. Jared Sullinger (17.4 points per game), William Buford (15.0 points per game), and Deshaun Thomas (14.3 points per game) have combined to contribute 61.4% of the Buckeyes points, on average.

Key Number: 29. While Ohio State has been impressive so far, the Buckeyes have concerns in terms of depth. Ohio State’s starters average 29 minutes per game with Lenzelle Smith Jr. being the low man at 23.7 minutes. Ohio State is 5-3 when Sullinger has at least 4 fouls and16-0 when he plays and has less than 4. Sullinger, Buford, and Thomas all had four fouls a piece in the Buckeyes 74-70 loss at Indiana on New Years Eve. The Buckeyes are 5-3 against teams that were in the AP Top 25 at the time of the game.

Notes: Following then-Coach Ed DeChellis’s sudden departure from Penn State on March 23, 2011, then-Boston University head coach Patrick Chambers was hired to take over the program. Coach Chambers’s first season in Happy Valley has been a lot like Coach DeChellis’s first season in Happy Valley – extremely rough. The Nittany Lions have won under two-thirds of their home games, and have had even worse success on the road with their lone road win by eight against Boston College.

Key Number: 20. The Nittany Lions have an average scoring differential of 20 points between being at home and being on the road. Penn State is outscoring opponents by an average of 6.5 points per game at home, but being outscored by 13.5 points per game on the road. Penn State has one road win to date. Under Coach Ed DeChellis, the Nittany Lions averaged 2.4 road wins per season. The last time the Nittany Lions had less than three road wins, it was 2007-2008 (Coach DeChellis has five road wins in his first four seasons, 14 in his last four seasons).

Notes: Coach Matt Painter’s second season in West Lafayette as head coach was the last time Purdue finished lower than second in the Big Ten during the regular season. Purdue has made five straight appearances in the NCAA Tournament under Coach Painter, winning at least one game each season (7-5 in the NCAA Tournament). The Boilermakers have some work to do if they want to make their sixth straight NCAA Tournament appearance. Purdue probably needs to win three of their remaining five in order to make the NCAA Tournament; three wins means Purdue has to either beat Michigan State at Mackey Arena or steal one on the road against Michigan or Indiana. Purdue is also lacking a marquee win.

Notes: The Badgers defense has been the best in the Big Ten. Wisconsin is giving up, on average, 51 points per game, outscoring their opposition by an average of 12.9 points per game. After losing three straight to Iowa, Michigan State, and Michigan --- with the former two being at the Kohl Center --- the Badgers have won seven of their last nine with the victories by an average of 7.7 points per game. Setting aside the 20 point home win over Northwestern, Wisconsin’s average margin of victory during this stretch is by 5.7. 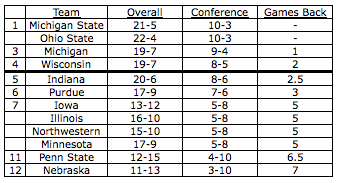