Back on January 24th, Michigan came to West Lafayette a few days after a tough loss to Arkansas and wound up with a close 66-64 win over the Purdue Boilermakers. Tim Hardaway Jr managed to score 19 points on 15 field goal attempts and each of Jordan Morgan, Evan Smotrycz, and Stu Douglass scored in double digits. Robbie Hummel played pretty well -- 16 points, 6 rebounds and 5 assists -- and the quickness of Lewis Jackson got him to 17 points on 6-8 shooting. Michigan outshot and outrebounded Purdue, but Purdue turned the ball over fewer times than did the Wolverines (which is odd -- Michigan has forced the most turnovers in Big Ten play -- but the Boilermakers are phenomenal, best in the country, at holding onto the ball). Since then, Michigan has gone 5-2 with its losses on the road to Michigan State and Ohio State, and Purdue has gone 4-3 with two wins over Northwestern and losses to Indiana, Ohio State and Michigan State. The Boilermakers will be without D.J. Byrd (suspension) and Kelsey Barlow (dismissal), but the two only combined for six points in the first meeting. [Apparently Byrd is back.]

*Averages are from Big Ten play only

The two biggest things that jump out about Purdue's statistical profile are their poor defense (10th in the Big Ten overall) and their absurdly low turnover rate (which makes their otherwise mediocre offense into a fairly effective unit). If all goes according to the numbers, Michigan will shoot the ball extremely well again, and neither team will turn the ball over or get to the free throw line very much. One thing to note is Michigan's field goal shooting in the last game -- the Wolverines attempted 36 of their 50 field goals from inside the arc and finished at a stellar 50% shooting. If not for the turnovers (Michigan had 12, four by Hardaway and 3 each by Burke and Morgan), Michigan would have won by several more.

I don't know how familiar all of you are with KJ's work over at The Only Colors, but I've been a big fan of his efficiency polynomial trendlines for a while now. They do an excellent job of depicting the ups and downs that a team goes through during a season, and shows how they've performed lately. 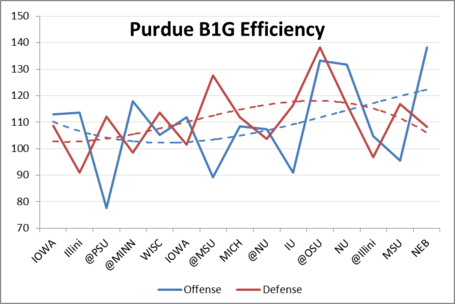 While Purdue's offense has improved over the course of Big Ten play, their defense has been consistently poor throughout. Their last game -- an 83-65 beatdown over Nebraska -- skews the graph somewhat, but it's hard to argue that they haven't improved offensively and played well lately. I guess that makes their <80 offensive efficiency showing at Penn State even more confusing. It should be a high scoring game with the way that the Boilermakers are playing on offense and defense.

Robbie Hummel is the star player for the Boilermakers, and the senior has recovered well after two ACL injuries. He's an athletic four that stretches the floor and averages 16.5 points and 6.9 rebounds per game with an absurdly low turnover rate for how often he has the ball in his hands. Lewis Jackson is a point guard who is somehow smaller than Trey Burke, but uses his lightning quick first step to blow by defenders with ease and has the strength to draw a lot of fouls. Jackson averages just over ten points and four assists per game. With the absence of Byrd [He's still here, and shooting a torrid 46% from three], Purdue's three point specialist is Ryne Smith; Smith has attempted 172 threes and 28 this season and shoots 42% from three. Terone Johnson has another, even more strange statistical oddity: the 6'2" guard has shot 35% from the free throw line on 74 attempts. Foul that guy. The loss of JaJuan Johnson has hit Purdue extremely hard -- his three replacements at center, Travis Carroll, Jacob Lawson, and Sandi Marcius, combine for 37.3 minutes, 7.3 points and 7.0 rebounds per game.

This is Michigan's final home game of the season, and senior day for Zack Novak and Stu Douglass. More will be written about those two later, but it will be extremely sad to see these two seniors -- guys who have helped bring Michigan back to national prominence -- suit up at the Crisler Center for the last time. Here's to seeing Novak's hustle and Stu's three pointers from the parking lot once more. Michigan has gone a combined 23-0 at home in football (8-0) and men's basketball (15-0) in Ann Arbor this year, so hopefully these seniors and this team can cap off a wonderful year at home with a win to keep them in the Big Ten Title hunt.