Your Sunday Drinking Instructions Are Shaking It Off

Share All sharing options for: Your Sunday Drinking Instructions Are Shaking It Off

Oh dear. That's what losing to Purdue at home feels like. Oh well.

Sure, it's 8AM on a Sunday morning. Sure, some states don't let you buy beer until noon or even not at all on Sundays. Sure, the only notable sporting event I care about today is Tottenham-Arsenal (which is this thing called soccer) at 8:30 AM. Whatever. Your Sunday Drinking Instructions soldiers on.

I've got two beers for you today - a mild and a heavy, depending on your level of sadness.

For Those Of You Who Got Started Yesterday

I'm going to start with some local features very soon, but since I live in DC right now and don't have great access to Michigan beers, I'm going to hit up a Charlottesville-area brewery for my first recommendation of the Sunday. I know it's a bit late, but consider checking out Starr Hill's The Love wheat. My girlfriend kept talking about how Starr Hill (better known for its fantastic winter beer, The Gift) was coming out with a spring seasonal for Valentine's Day in a pink bottle. Having been disappointed in the past by gimmicky beers (sorry Abita, not a fan of Purple Haze unless I'm not in a beer mood - but if I want raspberry seltzer, then great), I was wary, but picked up a six-pack a) because of this fantastic charitable outreach and b) because Brooklyn's Pennant Ale wasn't on sale in the fridge and I wanted to drink it rather soon after purchase (this was yesterday, I swear I'm not drinking right now...yet).

Anyway, this is a solid light wheat beer. Not too sweet - often, I can only drink one wheats before feeling a bit overwhelmed - but I see no reason not to drink several of these (responsibly, of course). It's well-balanced and my favorite part about it is the lack of any one overwhelming flavor. The bottle claims to taste like banana but I don't taste that - I do taste the clove and some other spices, but just barely enough to be satisfied. Dave hated the Belgian I wrote about last Friday, so this beer's for him - totally unobjectionable, but good enough to have a few. 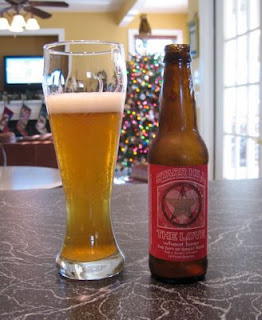 I'll eventually introduce some beer ratings for this site, but the best way i'd describe this sucker is "nice and easy." Nothing too much of any one thing, and as far as hefeweisens go, not too much - some of them kind of kick you in the teeth with sweetness or that wheaty taste, and The Love does nothing of the sort.

Yesterday was frustrating. How frustrating, you ask? Well, about as frustrating as the season could be. Michigan had no business losing that game. I was lucky enough to be wined and dined last night (and by wined, I mean someone really nice bought me a Maker's on the rocks, which I will take to my grave - hopefully not - as my favorite alcoholic drink of all time), but for those of you whose post-loss cleansing looked something more like this than this, then I've got a perfect beer for you.

I don't often recommend hoppy beers, but 'tis the season -AND you can get it on tap at Tio's along with Mount Nacheesmo, ask Adam Richman about that - for Bell's Hopslam. I'm going to come straight out and say that if I do drink an IPA or hoppy beer, it had better be damn good - I drank way too many of them last fall and got kind of sick of them. That said, I saw this one on the menu at Tio's and was intrigued at its audacity - clearly it was the beer I needed to try. I was pleasantly surprised by its... balanced? flavor. It's a bit more sweet than bitter, which I liked (sorry, bitter lovers, I promise I'll write about some soon) and the 10.0% ABV was a kick. Oh, and I think I paid either $4 $5 for a pint - you can get them in huge glasses too.

I'd imagine the bottled version of this beer is slightly more bitter than the draught version, but whatever. Go drink 4-10 of these. Doctor's orders. 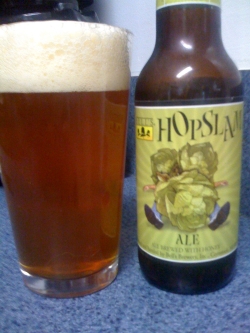 I'm not repeating the name of the website on here, but if your waiter/buddy/girlfriend/the Pope gives you this much frothy head on your beer, send it back.

Cheers, Michigan Faithful! Like I said, look for some local features soon!