Does Michigan Actually Live and Die By the Three?

Share All sharing options for: Does Michigan Actually Live and Die By the Three?

Well, obviously you're less likely to win when you miss a lot of threes. Seems pretty obvious right? Teams that shoot better win. I'm not saying that Michigan doesn't need to shoot well to win -- not at all. However, for all that we hear "Michigan is a team that needs to shoot well to win; they live and die by the three," is it actually true? We also hear that Michigan's defense runs the 1-3-1 zone a lot -- obviously that's not true, John Beilein figured out that Michigan is best served running man-to-man defense (we can actually get some defensive rebounds with it). I was looking at Michigan's games in which they shot badly from behind the arc, and well...

I guess Digger Phelps was incorrect when he stated that Michigan needed to shoot the ball extremely well from three to win the game against Ohio State. Michigan hit the fewest three pointers in a game that they've hit all year (3), and did so with the lowest percentage that they've shot all year (23.1%). Michigan won 56-51 over the then - #6 ranked Buckeyes. Apparently they didn't need to make threes to win. In fact, the Wolverines are 8-3 in the games in which they've shot the poorest from behind the arc, and those wins are some of their most impressive: Ohio State, Michigan State, Wisconsin and Memphis are some of Michigan's best wins.

With those games, Michigan proves that it can win without shooting the three ball well, or differently stated: Michigan doesn't necessarily lose if it misses threes. It doesn't die by the three.

Okay, does Michigan live by the three? Not more so than the rest of the Big Ten does. I plotted Michigan's 3 point shooting percentage in individual games on the x-axis and its corresponding offensive efficiency on the y-axis: 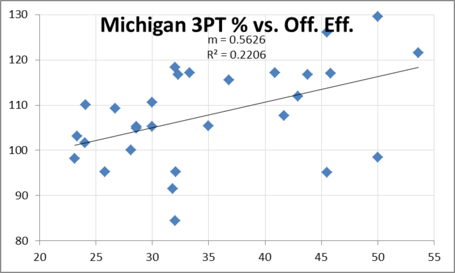 I compared this with the same data from the rest of the Big Ten combined (which is a total of 314 data points): 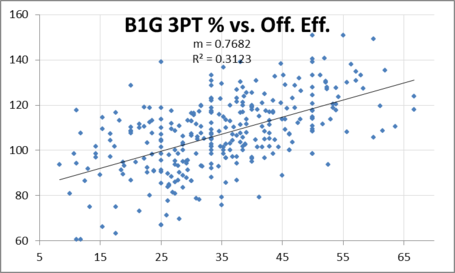 So what does this mean? Overall, not much. Since Michigan shoots a lot of threes, and three point shooting is largely random, I guess this tells us that one uniquely bad three point shooting performance in the NCAA Tournament isn't necessarily going to knock the Wolverines out and that the tournament fate of Michigan is in their own hands for the most part. Mostly though, this disproves the conventional wisdom that Michigan "lives and dies by the three." Yes, Michigan shoots a lot of threes -- the fifth-most nationally, in fact -- but Michigan's offensive performance isn't as dependent on three point shooting as everyone thinks.