Please bear with me here, as some of this stuff can get long-winded. The explanations for each of the advanced stats I'm using to look back at Michigan's season will be listed below, and it could go for a while. Fortunately, I can just link back to it on each post after this one, so this is the only time I'll have to provide a long glossary of information on these stats. Oh and I'm basically mimicking the idea of Heck Dorland over at The Only Colors with these posts, mostly because it's a great one. Hopefully looking back at Michigan's season with this "New Math" will accomplish a few goals: better understanding the trends and tendencies of Michigan throughout the year, evaluating how well or how poorly the Wolverines fared in certain situations, and how the games against our opponents looked (as Michigan will have 9 of the same 2012 opponents in 2012). Establishing this database will make me able to enter data from this upcoming season to better analyze games as well.

I'm going to admit this up front -- I'm a pretty big stats geek. I love the information provided in advanced statistical metrics in particular, especially in basketball. Ken Pomeroy's tempo-free perspective on college basketball has completely changed the way that I look at the game, and I feel like I've become better informed and more interested in basketball as a result. Unfortunately, advanced metrics are not as popular in football as they are in other sports such as basketball and baseball and there are a few reasons for this: there aren't typically as many data points in football (there are fewer games and fewer possessions) and the success of a football play is generally more ambiguous than that of say, an at-bat in baseball (Is the only way a play can be successful if it results in a first down? How much yardage needs to be gained for a play to be successful? Are big plays the only way to judge an offense's success?) I stumbled upon the work of Bill Connelly over at Football Study Hall, and lo and behold, I found some great advanced stats for football that are easily understandable and accessible.

Connelly breaks down the game even further -- instead of looking at each drive as an independent trial, he looks at each play as a separate, independent event in and of itself, which increases the sample size dramatically from a handful drives per game to more than 60 plays per game. Since play-by-play data can easily be obtained from ESPN's game recaps and entered into a spreadsheet, there's a relatively painless way to get these stats on a game-by-game basis. Since I can't really explain what I'm trying to find with this data without explaining the statistics that Connelly uses, I'll provide some definitions:

Here is the official FO definition for Success Rate:

Success Rate: A common Football Outsiders tool used to measure efficiency by determining whether every play of a given game was successful or not. The terms of success in college football: 50 percent of necessary yardage on first down, 70 percent on second down, and 100 percent on third and fourth down.

The idea behind Success Rate is simple: every play is deemed successful or unsuccessful based on down, distance and yardage gained. Plays on first, second and third downs (and fourth, for that matter) all have as close to the same success rate as possible (between 40% and 45%).

Essentially, staying ahead of the chains and making each successive down more manageable is the goal here -- a play is either successful at doing that or it isn't. There is no ambiguity.

As a frame of reference, an average success rate is 42%.

First, we start with the official EqPts definition at Football Outsiders:

Equivalent Points Per Play (simplified to PPP) is the difference between the equivalent point value of the final yardline and the starting yardline on a given play -- a 10 yard gain from a team's own 20 to the 30 would be worth 0.267 EqPts. Averaging out the EqPts gained on all the plays with a certain criteria will give us the PPP value. (FWIW, here are the EqPt values of each yardline. Unsurprisingly, gaining yardage closer to your opponent's goal line is more valuable than gaining it in your own territory).

S&P is simply the addition of these two metrics, success rate and points per play, to form an aggregate number. Think of it as the football equivalent to baseball' on-base plus slugging percentage -- on base percentage judges of effective a hitter is on getting on base, and slugging percentage judges how powerful a hitter is. S&P uses that same logic: success rate gives a measure of how efficient an offense is and points per play judges how explosive that offense is. This OPS analogue is used as the primary metric for judging offensive and defensive success, as it incorporates how well an offense moves the chains with how many big plays they generate.

This is the way that play situations are classified by Connelly -- a standard down is first and ten or less, second and six or less, and third or fourth and four or less. A passing down is anything longer than that; first and greater than ten, second and seven or greater, and third or fourth and five or greater. Breaking down plays in this way serves two primary purposes: seeing how well a team stays in manageable down and distance situations and finding out the tendencies and effectiveness of offenses in short vs. long distance scenarios.

Quite simply, this is the percentage of plays that a team runs at or past midfield (for Enemy Territory %) or at or past the opponent's 20-yard line (for Red Zone %). This is used to see how much a team stays backed up in it own end, how many plays it runs while in scoring position, etc.

One quick note on turnovers: I didn't include them as a part of the play-by-play data because it's extremely difficult to judge how deleterious a play is PPP-wise when the other team gets the ball. To make things easier, I'll look at all of the turnovers separately from the rest of the play-by-play data and evaluate them in terms of significance, value lost/added, and other factors.

Now on to the actual game

Without further ado, here's the box score with this "new math" from the Western Michigan game back in September: 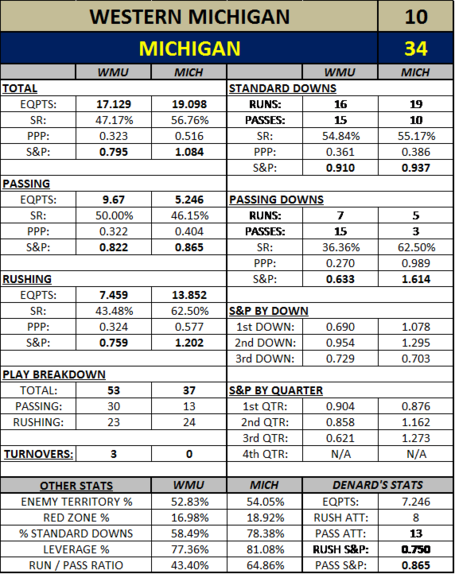 Kind of. Firstly, Michigan ran fewer plays (37 to 53) and the Wolverine offense was more efficient (57% success rate for UM to 47% for WMU) and explosive (0.52 PPP for UM to 0.32 for WMU) than Western's. Still, Michigan only scored three offensive touchdowns and had 288 total yards compared to 279 for WMU. That's not much of a difference, and to borrow the common platitude, this game was much closer than it looked.

Remember, this analysis completely disregards turnovers and their effect on the game. To Western's credit, they managed to drive the ball inside the Michigan 25-yard line on each of their first three drives. The first quarter of the game actually only consisted of two drives -- a seven minute touchdown drive for WMU and an eight minute drive that was capped off by a short Fitzgerald Toussaint touchdown on the first play of the second quarter. The Broncos missed a field goal on their second drive, Michigan went three-and-out, and then Western went on another long drive. Fortunately, Jake Ryan's pressure on Alex Carder forced an interception by Brandon Herron, who took it 94 yards for a touchdown. Western had the ball on Michigan's four-yard line, which is worth a little over 5 EqPts (so an interception loses five points for Western and the touchdown gives seven to Michigan, a twelve-point swing on one play). That's three long, promising drives that finished with a combined seven points.

To me, there are three reasons why the score looked deceptive: 1.) the Broncos failed to convert on their opportunities, 2.) Michigan benefited from a bit of luck (as the axiom goes, you make your own luck), and 3.) the Wolverine defense tightened up, started bringing pressure, and slowed down the WMU offense. Two plays really were deciding factor in this game, and if you remember anything about this game (except for the monsoon), you'll remember these plays: the aforementioned pick-six by Herron and the jarring hit that Jordan Kovacs laid on Alex Carder that forced a fumble which was also returned for a touchdown by Herron. Outside of those two plays, the only other really big play in the entire game was a 44-yard touchdown run by Michael Shaw to put the game out of reach. Michigan's defense did well to bring pressure (and increased it throughout the game) which was an extremely welcome sight after the RR era, but forcing those turnovers wasn't just brilliant opportunism, but a bit of fortune as well. I'm certainly not complaining.

What will be a recurring theme throughout these posts, at least for the first few games, will be slow starts from the Michigan defense. Because of the thunderstorms, only three quarters were played. Western's S&P decreased significantly from quarter to quarter (0.904 to 0.858 to 0.621), and by the end of the game, Michigan was beginning to dominate. Western's success rate fell from quarter to quarter as the Michigan defense started to get WMU into more passing situations. When Western was in those long down-and-distance situations, Michigan could afford to dial up the heat -- as evidenced by two monster hits by Kovacs. The slow start from the defense was concerning, but the improvements over the course of the game are a testament to how good the defensive coaching staff was at making adjustments.

On offense, this was very much a typically boring, play-it-safe type of game. Part of this was due to the smaller sample size, but Michigan seemed content t run the ball pretty effectively and not take many risks with Denard Robinson's arm. Interestingly, however, Michigan's offense did better in long yardage situations than in a standard down-and-distance, perhaps because it was willing to try to take more of a chance to move the ball down the field. Like the defense, Michigan's offense improved throughout the course of the game and put together a few solid drives before the game was called. For the record, in this game Fitzgerald Toussaint and haw each received a few carries -- Toussaint scored twice and Shaw once. Denard really didn't do much, leaving the heart-attack inducing madness heroics for the next week against Notre Dame. This was the only game where he didn't do anything, good or bad.

Western Michigan went on from this game to finish with a record of 7-5 (including a narrow loss to a pre-collapse Illinois team) before dropping an exciting Pizza Bowl to Purdue. The Bronco offense, particularly the Alex Carder to Jordan White aerial combination, was proficient throughout the year -- it's not a big surprise that Michigan didn't shut them down completely.

Hopefully this "New Math" project will be a worthwhile endeavor -- there are some interesting things these numbers can tell us (like Michigan's defense started games slowly at first for example), there will be some interesting trends to discover over the course of the season, and it will be helpful to see how Michigan did against opponents that will be on the schedule once again in 2012.