Tuesday Happy Hour is getting sent to the MAC

Share All sharing options for: Tuesday Happy Hour is getting sent to the MAC

After spending the last week and a half doing an in depth study on two of the Big Ten's most hapless programs then watching a crazy final weekend in the English Premier League it is hard not to think about how different college football would be under a system of relegation and promotion. Spencer Hall, in all his demented glory, says, why not? Would we have spent all of last week breaking down yet another Indiana rebuilding project, or would the week be better spent talking about the newly promoted Toledo Rockets chances at hanging around for a couple years in the Midwest's top division?

Save me the lecture that instituting relegation/promotion in modern college football would be voted down almost immediately. I know it. The blue-bloods wouldn't have much to worry about (although it is hard to see Michigan avoiding relegation after 2008 -- and you thought people wanted Rodriguez run out of town before, hooo-boy), but it is the other 75% of the BCS conference membership that would object -- and with good reason, a few years spent in the MAC or Sun Belt would be fiscal hell.

But wouldn't it be cool? Think about how much more interesting the final few weeks of the season would be just in the Big Ten. Now, instead of quickly changing the channel every time a Purdue vs. Illinois or Indiana vs. Minnesota game comes on, you would hang around and watch a little bit. These aren't just bad teams struggling, but bad teams playing for their very existence as major college football programs. When was the last time anyone outside Indiana -- or let's be honest, inside Indiana -- cared about the Indiana vs. Purdue rivalry game?

It may not be a perfect system, some fine programs would no doubt be forever ruined, and you could bet it would be messy as hell, but for all the talk of college football having the greatest regular season in sports we could still up the ante.

Let 'em fight for their very existence. Would you not be entertained?

U-M ranks second in the Big Ten and seventh nationally in terms of self-sufficiency with its operating budget -- $10,621,815 more revenue than expenses minus subsidies. U-M received $272,684 in subsidies.

Speaking of the money involved in college football, USA Today released its annual study of athletic department revenue and expenses. Michigan is once again near the top in both, and one of a handful of programs that is wholly self sufficient.

Recruiting: Father says Michigan doesn't pressure for commitments - Store this one in your memory bank for the next time one of your friends who is an MSU or OSU fan tries to tell you that Michigan's recruiting success comes from Brady Hoke pressuring kids into commitments before they are ready.

Ironically, we’ve reached a point where both Notre Dame and Vegas are trying to protect themselves from the wackos who not only take this bet, but believe strongly in its chances of winning. This is the never-ending problem with Notre Dame football. People love traditional powers and underdog stories. The media loves popular programs that drive ratings. Unrealistic expectations are the predictable offspring.

Ty Hildebrandt of The Solid Verbal podcast talks about his beloved Irish and how absolutely ridiculous it is that people still bet on Notre Dame to win the title.

Conference Realignment: The Big 12 Should Swing For The Fences

As crazy as it may have sounded a few months ago, former Stanford athletic director Bob Bowlsby inherited a similar situation when he took the reins of the Big 12 a couple of weeks ago. Not only has the Big 12 survived two tumultuous rounds of conference realignment, but they have begun to emerge into a position of power. Instead of falling apart following the departures of two more teams (Texas A&M and Missouri left last fall, making it one full third of the conference's original membership heading for the exits in 18 months), the conference asserted its dominance of the Big East, snagging West Virginia and TCU to move back to 10 programs. Now, rumors of further developments have been friendly to the conference as well. In other words, if Bowlsby were in the mood to take a home run swing of his own, the move could be both well-received and somewhat successful.

While the ACC has put up the front of being one of the relative powers in conference realignment, it is hard to argue the fact that the conference is at a serious disadvantage next to the big three leagues (Big Ten, SEC, Pac 12) and a small shift in favor of the Big XII could leave the ACC all alone, just above the Big East but otherwise irrelevant nationally.

*The Essential Smart Football* - Chris Brown of Smart Football wrote a book. If you are interested in football strategy and the evolution of the game I cannot recommend this highly enough.

Can Urban Meyer Meet An Almost Impossibly High Standard? - If that standard is "beat Michigan nine of out ten times in The Game" then I'll put my money on "no". However, Ted Glover brings up an interesting point -- a great deal of Jim Tressel's postseason success was set up by Michigan's down years in the rivalry. Without that final hurdle to trip over, OSU was fortunate to be able to stroll into the postseason much easier.

While I think Ohio State fans are a bit foolish for adjusting their sights from "9-1 over ten years" to "six or seven wins over ten years" I do like the idea of getting a chance to beat Ohio State in back to back weeks. That would be the quickest way to build up a rather impressive streak of our own.

Finally, Black Heart Gold Pants has its Pro Combat Mock Up for Minnesota finished, and behold it in all its glory. 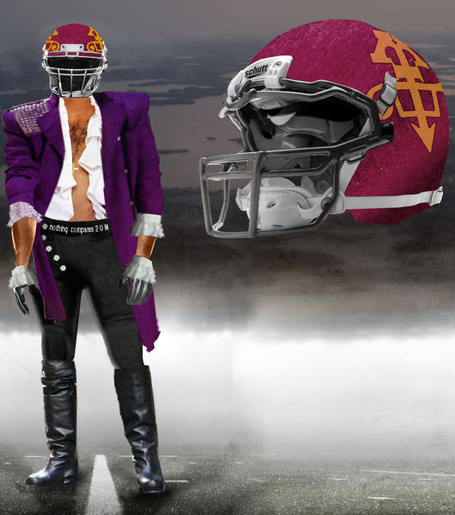 This will be hard to top.