Each Wednesday, up through August, I’ll cover a different Big Ten team or Michigan non-conference opponent. This week, I’m covering the Minnesota Golden Gophers, who Michigan will battle for the 93rd meeting of the Little Brown Jug.

Notes: The Gophers haven’t been to the post-season since 2009, and haven’t been a consistent team since the Glen Mason era, which ended at the conclusion of the 2006 season. Minnesota has only finished above fifth, once, in the 2000s. Jerry Kill enters his second season at Minnesota, but Kill has a large amount of coaching experience, most of which is outside of the FBS level. The most important thing for Kill, right now, is to make sure he has his health under control, as he missed a few games last season.

BVTSB Take: Entering the 2011 season, Minnesota was largely considered to be tone of the worst Big Ten team, if not the worst. And that statement would be tough to argue with, especially after Minnesota’s drubbing at the hands of Michigan, to the tune of a 58-0 beatdown. Two more blowouts ensued, in losses to Purdue and Nebraska, but Minnesota was competitive in their final five games, with wins over Iowa and Illinois and a close loss to Michigan State. Minnesota was 2-3 in games decided by seven points or less in 2011. Starting quarterback MarQueis Gray, a wide receiver convert, returns this season, as does backup Max Shortell, who saw significant time last season. The Gophers return third leading rusher Donnell Kirkwood, but lose Duane Bennett to graduation. Receivers Brandon Green and Malcolm Moulton will need to step up this season, with the loss of Da’Jon McKnight to graduation. Minnesota struggled a lot on defense last season. Experience in the secondary will help, as the Gophers secondary was riddled with inexperience and injuries last season. The non-conference schedule is more forgiving, too. The Gophers open with games against UNLV, New Hampshire, Western Michigan, and Syracuse; the Gophers could very well win 3-4 of their non-conference games. If the Gophers win their first four, they could be looking at a post-season berth. For now, though, I’ll be conservative and say the Gophers improve on their 2011 win total in 2012. 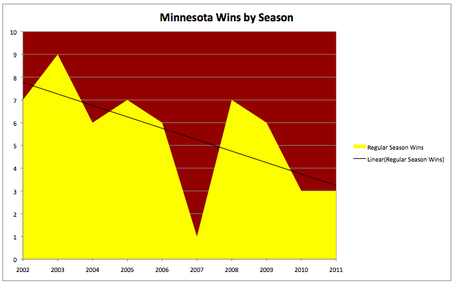 What are your thoughts on Minnesota football? Tweet to us @BVTSB.