If you are unfamiliar with any of the statistics mentioned below, check out the glossary at the beginning of the post here. There will also be a short list of definitions at the bottom of the post.

Heading into the game:

This was the first weekend of Big Ten play for both teams, and both had very different non-conference showings. Michigan beat its non-BCS opponents (Western Michigan, Eastern Michigan, and San Diego State) with relative ease, and along with that inexplicable win under the lights against Notre Dame, went undefeated in non-conference play. The Gophers, on the other had, didn't fare so well: after a shockingly close 19-17 loss at USC, they traveled home to face an easy slate of weak opponents. Unfortunately, New Mexico State and FCS 1-AA North Dakota State beat Minnesota in Minneapolis, two of the worst losses recorded by a Big Ten team all season. A 29-23 over Miami (OH) was the only thing keeping the Gophers from having a winless non-conference showing.

Perhaps the biggest story for the Gophers over the early part of the season was the health issues of Jerry Kill -- he had a seizure during that loss to New Mexico State and continued to have them sporadically through the next few weeks. Kill didn't miss any games and had a history of seizures in the past, but this was a serious concern for Minnesota. The seizures thankfully have subsided and Kill's health has improved. Less seriously, MarQueis Gray was injured and wasn't expected to play against Michigan (he didn't), so the Gophers were down to a true freshman quarterback, Max Shortell, coming into Ann Arbor, a week after losing to a 1-AA team by 13 points. I commented to a friend of mine shortly before the game that this would be the worst team that Michigan had faced, considering their bad losses to NMSU and NDSU and their only playmaker on offense -- Gray -- would be out (no offense to Da'Jon McKnight, but it's hard to do a lot when no one can throw you the ball).

In short, Michigan absolutely destroyed Minnesota. The 58-0 win was Michigan's largest margin of victory against a Big Ten team since beating Northwestern by 69 in 1975. It was dominant.

Here are the first-half drives for each team:

That's a 38-0 halftime lead with Michigan scoring five touchdowns and Minnesota recording four first downs in the first half. It's pretty safe to say that this game was basically over sometime early in the first half, if not when Minnesota stepped onto the field to start the game. Michigan's defense smothered the Gophers on almost every play, mostly due to pressure from the defensive line. Add in the extra blitzes by Jake Ryan and Jordan Kovacs, and the Minnesota offensive line was simply overwhelmed. The long fumble return for a touchdown by Courtney Avery was the exclamation point on a phenomenal defensive performance. Denard Robinson and the Wolverine offense were clicking on all cylinders -- Denard was 15-19 with 169 yards, 2 touchdowns and no interceptions (and added a rushing touchdown), Fitzgerald Toussaint rushed for over a hundred yards and scored a touchdown, and Vincent Smith scored on a touchdown run, a nice throwback screen, and threw a touchdown to Drew Dileo. I'm guessing that Al Borges decided to debut the odd formation with Denard in the backfield and Devin Gardner under center to throw Michigan State off, but it was effective. 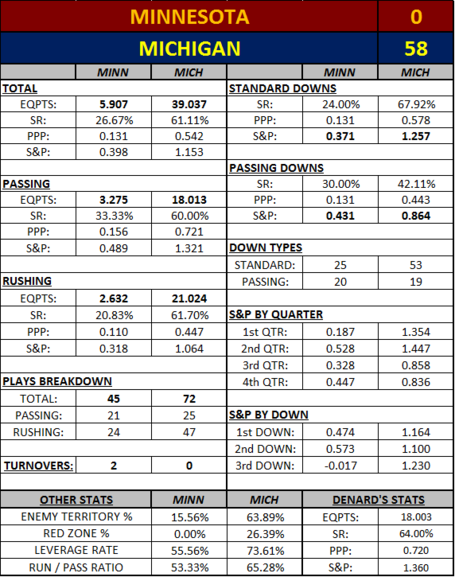 As expected, S&P views Michigan's offensive performance extremely favorably -- Michigan's passing offense was both explosive (PPP) and effective (SR) and did a good job of staying ahead of the chains with the running game. The overall game numbers are distorted a bit by Michigan's extremely conservative (but still pretty decent) offense in the second half, but the first half (1.354 and 1.447 S&P in the first and second quarter respectively) was an offensive clinic. Michigan wasn't dependent on big play either, as the success rate and leverage rate over the entire game were stellar. They just moved the ball effectively. The equivalent points total (39) falls well short of the actual points total, but that's due to Avery's touchdown (which, as a turnover, doesn't factor into this metric) and three field goals by Brendan Gibbons. Michigan's offense scored six touchdowns and although they could have had many more, it was still an excellent performance. If Bret Bielema was on the sidelines instead of Brady Hoke, Michigan probably would have just continued its destruction of the Minnesota defense well into the second half and the Wolverines could have easily hung 70 points on the scoreboard. As it is, even with the backups in and the run-out-the-clock offense going for a large part of the second half, Michigan's offense put up an extremely good 1.153 S&P.

Perhaps more impressive than Michigan's offense was the defense: holding the Gophers to a ridiculously low 0.398 S&P and limiting them to only seven plays on Michigan's side of the field (plus keeping them out of the red zone entirely) was outstanding. All of these advanced metrics corroborate how stellar the Michigan defense played, but the most impressive were Minnesota's first quarter S&P (0.187, they only managed four yards of offense and went three-and-out twice), third down S&P (somehow -0.017, their success rate was zero as they didn't convert a third-down attempt and their PPP was negative), and the very low rushing S&P (0.318, the Minnesota line was completely dominated by Mike Martin, Ryan Van Bergen and company). There wasn't a more impressive performance by the Michigan defense over the entire season, as the Minnesota offense was totally and completely dominated on almost every single play -- the Gophers gained ten yards or more on only six plays during the entire game. I know that MarQueis Gray was out and Max Shortell was extremely young and overmatched, but still, every single statistic was below-average at best for Minnesota's offense. If Michigan's offense was excellent, the defense was incredible.

What this tells us for next year:

Basically what we knew already: Minnesota probably can't improve to the point where they're competitive on either side of the ball. A solution to Michigan's offense likely won't be discovered by the Gophers; the Wolverines moved the ball at will, scored at will, and essentially did whatever they wanted all game long. Extrapolating from the first and second quarter S&P numbers over the course of the whole game, and Michigan's offensive performance would have been even more impressive. Barring a massive improvement by Minnesota's defense, Michigan's offense will be able to replicate a similar offensive domination because of how they did it last year -- Denard Robinson's best game through the air was against the Gophers, and between he and Toussaint, Michigan's running game was way too good for Minnesota's defense. Michigan seldom was in long-yardage situations so they could afford to play conservatively for the most part, but they didn't, breaking out that odd formation with Denard and Devin Gardner in at the same time and a halfback pass for a touchdown. It wasn't gimmickry that allowed Michigan's offense to be so dominant though, and before they took their foot off the gas, Denard and company were nearly perfect.

For Michigan's defense, a performance like this won't happen again, if only because Gray will be much, much better than Shortell. Still, getting a better quarterback for next year's matchup in Minneapolis likely won't improve the running game that much -- Gray is mobile but Minnesota's ragtag group of running backs take the bulk of the carries. Michigan's defensive line will be worse, but the run support provided by the back seven was outstanding as well. This was the nadir for Minnesota's offense -- by far their worst performance -- and that can be chalked up in part to Gray's absence, but still, reversing this type of beatdown, moving the ball well, and putting up a couple of touchdowns will be extremely difficult. It's hard to draw any significant conclusions on this side of the ball because Minnesota's best player was out, but the differential between Michigan's S&P and Minnesota's was incredible -- it will take an absurd amount of luck or a very unlikely improvement for Minnesota (and regression for Michigan) for this game to be competitive next year. College football is extremely unpredictable, but dominance like this game -- and for the past few decades in this series, for that matter -- is hard to reverse outside of a few anomalies. I know that this was rock bottom for the Gophers and that this probably won't happen again. Beating Michigan or even making this game competitive would be an exceedingly impressive turnaround.

For a few weeks, Minnesota was considered to be the worst BCS conference team in the country and looked to finish out the rest of the season without winning another game, but there were some signs of life down the stretch: after losing to Nebraska by four touchdowns to fall to 1-6, the Gophers pulled a shocking 22-21 home upset over Iowa and started to turn things around -- they played Michigan State very close in East Lansing the next week and definitely could have won, and they closed out the season with an authoritative win over Illinois in Champaign at home (even though Zook was doomed, it was still a very good win). Michigan fans remember the shellacking in Ann Arbor, but the Gophers undoubtedly improved over the last half of the season. It might not be enough to make the Brown Jug game a close one in the near future, but Michigan won't win 58-0 again. Who knows, an upset could be possible, depending on how well the Gophers improve on defense and how well Gray can attack the Michigan defense.

PPP: An explosiveness measure derived from determining the point value of every yard line (based on the expected number of points an offense could expect to score from that yard line) and, therefore, every play of a given game. National average: 0.32.