If you are unfamiliar with the statistics in the table below, check out the glossary at the beginning of the post here.

Now that I've kicked off this TOC-inspired series with some "New Math" from Football Study Hall with Michigan's 34-10 win over Western Michigan, it's time to look at the first night game at the Big House, Michigan's miraculous 35-31 comeback against Notre Dame. It was quite possibly the most exciting (and schizophrenic) football game I've ever seen -- between eight total turnovers, four Michigan touchdowns in the 4th quarter, five touchdowns (and three interceptions) by Denard Robinson, the sheer ridiculousness of fumbles by Tommy Rees and Cierre Wood, the suspense of seeing if Brian Kelly would match his shade of mauve after coming unglued the week before against USF, and with the three touchdowns -- one for the Irish but two for the Wolverines -- it was insanity under the lights in Ann Arbor. 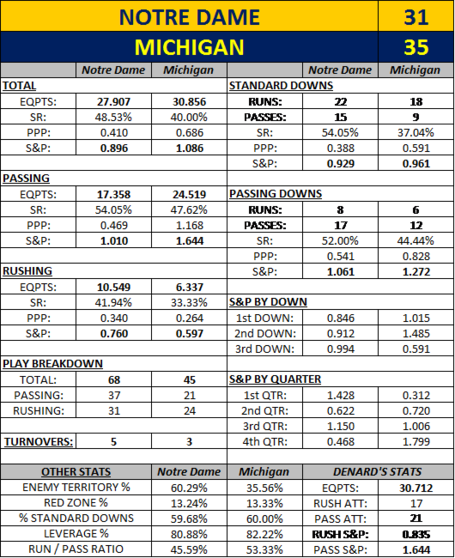 There's so much to be said about this game, I don't really know where to start. First off, I'm amazed, looking back, that Michigan's running game did so poorly against the Irish. I know that Manti Te'o is a tackling machine and that he, along with the rest of the front seven in Notre Dame's 3-4 alignment were very solid and underrated throughout the year, but they completely shut down the Michigan running game (outside of a few big runs by Denard). Michigan's low success rate of 33% was somewhat mitigated by the PPP added on those long runs by Denard, but still, Michigan's rushing S&P was extremely below average. That the Wolverines were still able to score 35 points on 5 offensive touchdowns is a testament to Denard's big play ability (and/or the coverage skills of Gary Gray).

Michigan's overall S&P was a bit higher than Notre Dame's, but there are a few notable anomalies:

--- Notre Dame's success rate (49%) was much better than Michigan's (40%), as the Irish were much better able to move the ball than were the Wolverines. Michigan's success rate on standard downs (37%) was ridiculously low, as Al Borges was more apt to call running plays in shorter yardage situations. With longer distances for first downs, Michigan passed the ball more frequently, leading to a better success rate (44% as opposed to 37%) and higher points per play on passing downs (0.828 as opposed to 0.592). Still, Notre Dame's ability to move the chains and stay on the field was pretty remarkable, as they wound up running 68 plays that didn't end with a turnover, compared to only 45 for Michigan.

--- Perhaps the weirdest thing about this game was Michigan's offensive improvement throughout -- Michigan only managed 27 yards and one first down in the first quarter, and somehow gained 249 yards and scored four touchdowns in the fourth. Here's their S&P improvement in chart form: 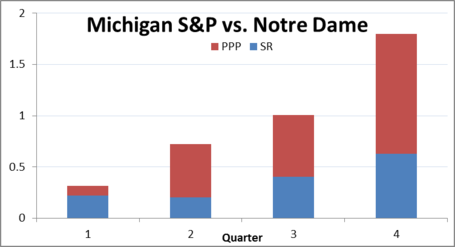 Michigan's offense went from 0.09 PPP in the first quarter to 1.74 in the fourth. That's just incredible improvement. Kudos to Borges for figuring out that our "Have Denard chuck the ball up to Junior Hemingway, Jeremy Gallon, or Roy Roundtree" offense was the most effective against ND. Abandoning all pretense of an under center running game sure helped.
--- Speaking of Denard, his numbers are nothing short of absurd. He only completed 11 passes, but he totaled 338 yards and four touchdowns with those completions. He also threw three INTs, but still, the success he had through the air was amazing. Denard's passes -- including his incompletions but not including his interceptions -- were worth 1.168 points per play, which is ludicrous. Here were his eleven completions:

Two of those touchdowns were with less than two minutes left. This might not have been Denard's most aesthetically pleasing performance, but it certainly was one of the most memorable. Final passing line: 11-24, 338 yards, 4 touchdowns, 3 interceptions. He threw a pick or a touchdown on 29% of his pass attempts. 36% of his completions were touchdowns.

--- As for Notre Dame's offense... bummer for them. The Irish moved the ball well enough and kept the ball on Michigan's side of the field (60% of their plays were run in plus territory), but they had three turnovers that could have otherwise been converted into points. Michigan's defense played about as poorly as it did all year and Notre Dame still shot themselves in the foot time and time again. Unsurprisingly, most of their damage was done through the air (1.010 S&P compared to just 0.760 on the ground), as it's hard to forget Michael Floyd repeatedly victimizing the Michigan secondary. A couple of late defensive stands (excepting the last ND drive, of course) were paramount to the Wolverines' comeback effort -- Notre Dame went three-and-out twice, and both subsequent drives were Michigan touchdowns. I alluded to this in the Western post, but this game was just another early-season example of Michigan's defense struggling early in the game and improving as the game went on. Notre Dame's S&P in the first quarter was 1.428 and 0.468 in the fourth quarter. Even taking into account the late touchdown drive for the Irish, this was an impressive improvement. If Denard hadn't found Gallon on the left sideline, the narrative for this game would've been much different: the defense would have been criticized heavily for losing this game. Fortunately we were all too happy to steal a win to care.

Notre Dame went on from this game -- and from their ugly 0-2 start -- to win 8 out of their next 9, beating the Michigan State Spartans the next week and losing to USC in October in their own night game. They finished the season with back-to-back losses: at Stanford and Andrew Luck and in the Car Care Bowl against Florida State. Their offense clobbered some mediocre competition -- 59 points against Air Force, 56 against Navy, and 45 against Maryland -- but struggled against some top defenses. Tommy Rees does not have the starting job locked down, as Andrew Hendrix and Everett Golson are also competing for the quarterback spot. Unfortunately, Manti Te'o is returning at linebacker, but several key contributors, including USF transfer Aaron Lynch, are departing. Their schedule looks more brutal this year -- games against us, Michigan State, USC, Stanford, and Oklahoma will all be contests against Top 15ish teams.

Since this game was so excellent, here are some highlights: