Each Wednesday, up through August, I’ll cover a different Big Ten team or Michigan non-conference opponent. This week, I’m covering the Northwestern Wildcats, who Michigan plays on November 10th, in Ann Arbor. The Wolverines were down 24-14 at half in Evanston last season, but outscored the ‘Cats 28-0 in the second half to win.

Notes: Its hard to believe it has been almost six years since the death of then-head coach Randy Walker. Coach Walker tragically passed away on June 29, 2006, suffering a heart attack. Walker struggled at the beginning, in Evanston, but his last two years featured teams who finished in the top four of the Big Ten. With Fitzgerald taking over the program, Northwestern would have an alum leading the Wildcats. Although Coach Fitzgerald’s teams did not make the post-season in his first two years, they have made four straight bowl games since, although each has been a loss. Now Northwestern is looking to win a bowl game for the first time since the 1948 season, when they defeated California 20-14 in the 1949 Rose Bowl.

BVTSB Take: Northwestern enters the 2012 season as one of the more inexperienced teams in the conference, as only Wisconsin returns fewer starters (10). Still, Fitzgerald’s excitement and experience should make up for the lack of seniority in Evanston. Most importantly, the Wildcats will have to replace quarterback Dan Persa, who threw for over 2300 yards and 17 touchdowns, despite missing the first three games of the season (Boston College, Eastern Illinois, and Army). NU does have some experience at the quarterback position, as Kain Colter played in Persa’s absence last season, he also saw time at wide receiver and running back, so Colter is clearly a player to watch out for. Possibly Northwestern’s biggest hit, outside of quarterback, is at running back. Starter Jacob Schmidt graduated (471 yards rushing, 4.4 ypc, and 6 rushing touchdowns) and Adonis Smith transferred to UNLV (266 yards rushing, 4.0 ypc, and 3 rushing touchdowns). Treyvon Green and Mike Trumpy are just two of the options to fill the void at the running back position. Leading wide receiver Jeremy Ebert departs to the New England Patriots and tight end Drake Dunsmore will be a Tampa Bay Buccaneer. That leaves wide receiver Demetrius Fields as the top returning wide out – he averaged 11.9 yards per catch in 2011, hauling in three touchdowns. Northwestern’s lack of experience on both sides of the ball will hurt, but their defense is going to need to improve, as they allowed 360 points last season, only Minnesota and Indiana allowed more points of all the Big Ten teams. Northwestern’s non-conference schedule gets tougher this season, as they open on the road against Syracuse, before home tilts with Vanderbilt, Boston College, and South Dakota. Its possible, although not likely, that the Wildcats could drop three of their four non-conference games. Nevertheless, Northwestern does avoid Ohio State and Wisconsin this season, which has to be a relief, but they do play both Michigan and Michigan State on the road. If Northwestern’s defense shows up, they could, conceivably, have a shot at winning as many as six conference games; for now, I’ll be conservative and predict the ‘Cats take a slight step back in 2012. 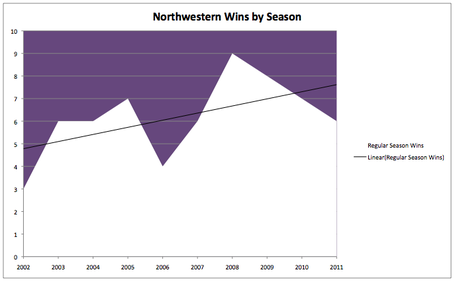 What are your thoughts on Northwestern football? Tweet to us @BVTSB.