How Will Michigan Close Out the 2013 Class?

Share All sharing options for: How Will Michigan Close Out the 2013 Class? 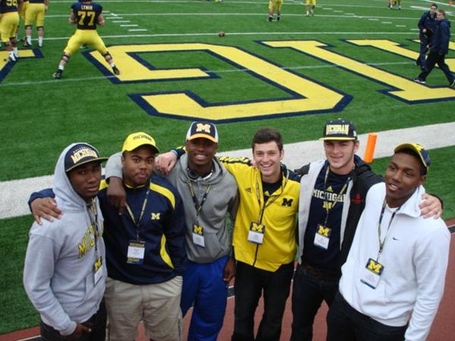 It's June 12th and the 2013 class has 21 commitments. Not only is this the fastest recorded start in Michigan football history, but it's also the most impressive. It's quite likely that Michigan only has about 3-4 available spots left for the 2013 class. Although this number is subject to change, the number has been thought to be between 24 and 25 for quite a while now.

Since commitment #21, long-snapper Scott Sypniewski out of Ottawa, Illinois, multiple rumors have been flying around regarding potential attrition. This makes sense considering the coaching staff accepted a commitment from a long-snapper 7 months before Signing Day.

Side note on Scott Sypniewski: I understand it's unheard of to offer a full scholarship to a long-snapper, but Hoke and Co. have been (admirably) working on every aspect of the game. The 2012 class was heavily focused on defense, with the additions of 5* DT Ondre Pipkins, and 4* LBs Joe Bolden and Royce Jenkins-Stone. The 2013 class is very offense-oriented with the commitment of highly-touted 5* QB Shane Morris and all five 4* offensive linemen. The third and arguably most important part of the game is special teams. Not only did our special teams improve immensely and play a major role in our 11-2 season last year, but it was one of the biggest problems we had throughout the last coaching regime. Sypniewski is considered to be the #2 long-snapper in the country, is built like a tank at 6'1" and 230 pounds, and is raved about by every coach to ever come in contact with him. I've read his blocking ability is exceptional. All I'm saying is if the coaching staff wants to offer a long-snapper a scholarship, it's probably for a good cause. It's even more interesting because the 2012 class included preferred walk-on long-snapper Tyler Tokarsky. I found this tweet from Michael Spath of TheWolverine.com interesting:

Those two? Tyler Tokarsky (2012) and Scott Sypniewski (2013). Clearly the coaching staff thought the team had problems at long-snapper. I also like to look at it this way -- when preparing for a championship team, you need to cover all of your bases.

Now onto how the 2013 class will potentially finish. We currently have 21 excellent commits and our most dire needs left to be filled are at wide receiver and defensive back. Some people would throw in running back as a big need, but I tend to disagree. Not only do we have a good group coming back this upcoming season, but the 2013 class already has commitments from 4* work-horse DeVeon Smith and the multi-faceted 4* Wyatt Shallman. Adding a third such as 5* Derrick Green or 4* Jordan Wilkins definitely wouldn't hurt and would obviously be more than welcome, but I think our needs at wide receiver and defensive back outweigh our running back needs.

I would guess there are at least 8 recruits that are hot on Michigan right now. We can probably only take half at the most barring any unforeseen attrition. Who are the top options?

Treadwell has a spot saved for him, which is probably why he's taking his time when it comes to the recruiting process. Barring something completely unpredictable, I would bet Treadwell is a part of the 2013 class. He is literally Michigan's to lose. He is pretty high on Oklahoma and Oklahoma State, but unless those visits absolutely blow him away, I believe Michigan is at the top for him. He recently came out with a top-7 that included Michigan, Michigan State, Notre Dame, Illinois, Oklahoma, Oklahoma State, and USC. Michigan shouldn't be completely comfortable with USC fighting for Treadwell's services as well, however, I believe it's unlikely he goes that far away from home. An official visit to Michigan can seal the deal for him. He wants to decide either this summer or during his football season.

McQuay is the 3rd ranked safety in the country according to Rivals. He's also the 33rd player overall. He stands 6'2" and we know how much Coach Hoke likes a tall backfield. He would probably play a little bit of both of the safety and cornerback positions at Michigan. Michigan is in his top-3 along with USC and Vanderbilt. Odd, right? Well, this may be to our advantage because highly-touted 5* CB Su'a Cravens recently committed to USC and their scholarships for the 2013 class are already limited as it is. It also wouldn't surprise me if 5* DB Priest Willis also commits to USC. Damn, what a backfield. Anyway, I'm not sure McQuay will either a) find room to commit to USC and/or b) will want to join a class filled with defensive backs. So might this end up a Michigan vs. Vanderbilt battle for McQuay's services? One would think that would favor Michigan. He has already visited and has said that he's enjoyed his visit. If we can get a player like McQuay out of Florida, it would be nothing short of outstanding.

Fuller is a beast. Clearly his rankings show that. He is a 5* and the #1 or #2 cornerback on all major recruiting sites. His top-4 includes Michigan, Virginia Tech, Clemson, and Tennessee. I personally think Tennessee lags in this situation, but both Clemson and Virginia Tech are very real options for him. Virginia Tech obviously has the familial connection considering his 3 older brothers either attended or currently attend and play football at Virginia Tech. They have been considered the favorites since the beginning. Clemson emerged as a real threat when he visited and loved his visit. Not only that, but his current and highly touted teammate, 4* LB Dorian O'Daniel, committed to Clemson a while ago. How good are Michigan's chances? Well, if I was a betting woman, I would not bet on Fuller committing to Michigan. However, that is how I feel today, and we all know how quickly recruiting can change. He is planning on visiting again in the summer and I think that would greatly increase our chances.

Luke is a 4* defensive back out of Chandler, Arizona. He recently came out with a top-5 which includes Michigan, Notre Dame, Texas, Nebraska, and Cal. Clearly, he has options. Luke's rankings vary between the different recruiting sites, but overall, he's a highly-sought after recruit. He plans on taking an official to Michigan, which is good news. I feel strongly about adding another DB to the 2013 class, so if the coaching staff strikes out with McQuay and Fuller, which may happen, hopefully they go after Luke hard. He's not as tall as most of the DBs they have been going after (at 6''0"), but still, he's a playmaker.

Green just received a 5th star on Rivals and became the #1 running back in the country. Wow. Ever since we offered Green, I was never convinced he had any interest in Michigan. On the contrary, I considered him an OSU-lock. Not only did he help a teammate of his join OSU's 2012 class, but he has said multiple times that he's grown up a Buckeye fan. They are also in his top group. However, I am not as convinced as I used to be. First of all, Green wants to play for a pro-style offense. I mean, he really wants to play for a pro-style offense and I think that helps Michigan's chances tremendously. Not only that, but I think once he started visiting schools and really opening his mind up to the recruiting process, I think he realized that a childhood favorite (OSU) is not necessarily his best option. He chats regularly with Michigan commits Shane Morris, David Dawson, Wyatt Shallman, and Khalid Hill. This can only help our chances. Basically, I think it would hard, yet doable, to reel in Green. I also would not be surprised one bit if he committed. I know our current commits are definitely working on him.

Wilkins is a 4* running back out of Cordova, Tennessee. He is thought to be an Auburn lean at the moment and almost committed on his visit there last week. He was slated to visit Michigan this past weekend but 247 reported that his trip got cancelled because he had to take the ACT. I'm not sure if or when he's planning on visiting in Ann Arbor, but I think we have zero chance of landing him without a visit. Once he visits, then we're talking. Wilkins is one of two running backs that we would take to finish this class off (the other being Derrick Green). The coaches were finished recruiting the position and were only waiting on Ty Isaac. Once Isaac chose USC, the full-court press was put on both Green and Wilkins in the hopes of signing one of them. I wouldn't be surprised if we landed one of them. At the moment, Michigan is in Wilkins's top-4 along with Auburn, Tennessee, and Vanderbilt. He could decide at any minute.

I'm not sure this is a realistic option but it's worth mentioning Mathis when we are in his top group. Since we just received two verbal commits from 4* DTs Maurice Hurst Jr. and Henry Poggi, we are most likely done with the position. If the coaches want another defensive lineman, there are few better than highly-touted 4* Joe Mathis. The general consensus though, is that it would be very hard to pull him away from the West Coast. He has an offer from almost every noteworthy school in the country. He was at one point (very early in his recruiting process) committed to the University of Washington, before he decommitted to take a better look at all his options. He has basically named every school he's visited a favorite at some point, from Washington to Michigan to Nebraska. His current top-10 group includes Michigan and a bunch of other fantastic schools. He does plan on visiting Michigan again though, so that's a good sign.

Bailey is a 4* wide receiver out of Seffner, Florida who is actually a current teammate of DB Leon McQuay III. Could this be a package deal in the making? Here's the way I see it: we are need of elite wide receivers. Bailey is not quite on Treadwell's level, but I would rather see another wide receiver added to the class (assuming McQuay joins him) then another running back. You might think I'm crazy since the running backs we're in on are of such elite talent, but Bailey is a legit wide receiver who happens to be a potential packaged deal with an elite defensive back. This gets me excited. At the end of the day, if we could reel in Bailey, the least it would do is create an incredible pipeline to Florida. Michigan is also currently in Bailey's top-group.

So how do I see the class finishing? With Laquon Treadwell, Leon McQuay III, and Alvin Bailey. I understand the McQuay + Bailey pull would be incredible, and quite difficult considering their southern roots, but I have high expectations of our coaching staff. I would be surprised if that didn't keep our 2013 class at #1.