Each Wednesday, up through August, I’ll cover a different Big Ten team or Michigan non-conference opponent. This week, I’m covering the Iowa Hawkeyes, who Michigan plays on November 17th in Ann Arbor, the week before the Ohio game. Michigan has lost three straight to Iowa, for the first time ever – over that stretch Michigan has been outscored an average of 31-24.

Notes: Quick, who is the longest tenured Big Ten coach? Its not Joe Paterno, as Paterno did not finish out the 2011 season. Not Jim Tressel, as he hasn’t been on the sidelines in Columbus since 2010. Believe it or not, its Kirk Ferentz, who enters his fourteenth season in Iowa City. Following Hayden Fry’s retirement at the conclusion of the 1998 season, Ferentz was hired. The first two years were abysmal, as the Hawkeyes were a combined 4-19, including 3-13 in the Big Ten. Since then, Ferentz is 92-47, 54-34 in the Big Ten. Iowa has averaged just over eight wins a season, since 2001. Iowa has made a bowl game in each of the last four seasons, and ten of the last eleven seasons.

BVTSB Take: Iowa fans are waiting for the Ferentz coached teams to take the next step though. Despite the post-season success, 6-4 in bowl games, Iowa has only finished in the top three in the Big Ten in four of the thirteen seasons under Coach Ferentz. The past two seasons, Iowa is .500 in Big Ten play. With a veteran presence at quarterback, Iowa has heightened expectations. James Vandenberg returns for his second straight season as a starter. As many remember, Vandenberg got his first career start in Columbus in 2009, filling in for the injured Ricky Stanzi – he lost, but not before the game went to overtime. Vandenberg threw for over 3000 yards last season. He also threw 25 touchdown passes. Iowa loses leading rusher Marcus Coker – he rushed for 1384 yards and 15 touchdowns. But replacing running backs never seems to be an issue in Iowa City, for one reason or another. Leading wide receiver Marvin McNutt departs, but Keenan Davis returns. McNutt had 82 catches averaging 16 yards per catch with 12 touchdowns. Needless to say, McNutt is a huge loss. Further, the wide receiver class simply isn’t strong for the Hawkeyes. They are going to need to rely more on Vandenberg and the running game, at least early on. If the spring game was any indication, Iowa is going to struggle offensively, as the quarterbacks were a horrid 24-for-52. Still, Iowa may not be challenged until October 13th. The Hawkeyes open with non-conference games against Northern Illinois (at the Chicago Bears’ Soldier Field), Iowa State, Northern Iowa, and Central Michigan. The Cyclones could present a challenge, but Iowa hasn’t lost at Kinnick Stadium against Iowa State since 2002 (the home team is 7-1 in the last 8 meetings). Minnesota has presented problems for the Hawkeyes as well, but the home team has also dominated that series, going 11-4 in the last 15 meetings, including 6-2 in the last 8. Iowa travels to Michigan State on October 13th – by now you should know the routine, as the home team is 9-2 since 1999. The soft opening to the season should be a boon for the wide receiving corps, but once the bye week passes, Iowa is going to face a tougher schedule. Still, Iowa has a great shot at improving on last year’s record. 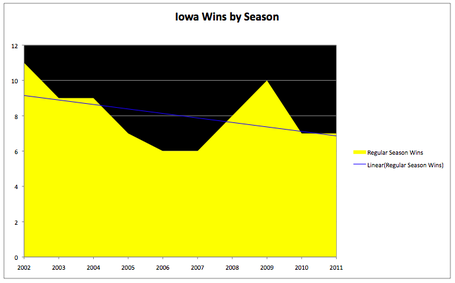 What are your thoughts on Iowa football? Tweet to us @BVTSB.