I suck at getting things done on time, so here's today's look back at the Michigan - Iowa game, one day late:

PPP: An explosiveness measure derived from determining the point value of every yard line (based on the expected number of points an offense could expect to score from that yard line) and, therefore, every play of a given game.EqPts is the sum PPP of every play run by an offense. National average: 0.32.

I haven't written one of these posts about a loss yet (11-2 woo!), but looking at this game, I can't help but feeling that it was basically a toss-up. The equivalent points differential was negligible, Denard Robinson's two first half turnovers put a field goal on the board for Iowa and took a touchdown or at least a field goal off of the board for Michigan, and that last-ditch drive got about as close as possible to scoring a touchdown without actually doing it. Michigan got the benefit of a lot of good luck, karma, whatever, this past year, and against Iowa, a game that could have gone either way went the wrong way. It happens. Not everyone can be 2002 Ohio State.

There's not really a whole lot that can be pointed out as the incredibly definitive thing that distanced one team from the other. Michigan's efficiency was lower, but a higher amount of plays made up for it. What really hurt the Michigan offense, and what hurt it in other games where it was shut down this past year (MSU, Virginia Tech) was a lack of big plays from the Michigan offense: 0.275 points per play was the third-lowest of the year behind those other two games, and Michigan only managed two plays of 20+ yards. Of course, the 82-yard scamper by Vincent Smith would have been a huge play, but his elbow was down and the play was rightly called back. Full credit to the Iowa defense for containing Robinson, Smith, Fitzgerald Toussaint, and the rest of Michigan's explosive offense. This S&P analysis is basically a play-by-play type thing, and the lack of big plays by Michigan's offense was the biggest reason why it sputtered. Regardless of the blown opportunities -- the late first half INT and the empty last drive -- 21 equivalent points is not very good. An S&P of 0.686 is worse. 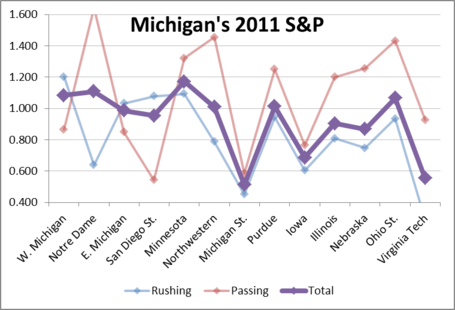 Michigan Offense: not good against MSU, Iowa, or Virginia Tech

With Michigan down 24-9 with about ten minutes left, Al Borges went into comeback mode and had Denard throw the ball around, so it's not that surprising that this was the highest amount of passing plays (37) run by Michigan all year -- the next highest were Michigan State (30) and Minnesota and Northwestern (25). Considering that Michigan almost came back, it wasn't a terrible strategy. If Michigan had somehow scored on that last drive and wound up winning in overtime, it would have been the best game-winning or game-tying drive in recent memory. Unfortunately it came up just short. Credit again goes to the Iowa defense for limiting big plays on those last two drives; even though they conceded a ton of yardage, it took a ton of effort from the Michigan offense and not giving up the cheap one was probably the difference between overtime and the result that was.

Overall, Michigan's defense had a pretty average game; the rush defense was pretty good for the most part, and the pass defense was kind of meh, but not too bad. Marcus Coker -- who was essentially the entire Hawkeye rushing attack -- didn't have any huge runs for the most part, but did finish with a very good game: 132 yards on 29 carries for two touchdowns. It's easy to see where Iowa's success in the passing game came as well -- James Vandenberg completed 14 passes and nine of them went to star receiver Marvin McNutt. McNutt went for over a hundred yards and Keenan Davis had a long 44-yard catch, and outside of that, Vandenberg didn't do too much. Here's hoping that losing McNutt (who graduated) really hurts the Iowa passing game, which was better on a play-by-play basis than its running game was against Michigan.

Really, this one's pretty obvious: don't underestimate Iowa for next year. Michigan hasn't beaten the Hawkeyes since 2006 and has lost three in a row; part of that can be explained away as a byproduct of the Rich Rodriguez era, but Iowa's been pretty damn solid in recent years. As the 2012 season approaches, many big games stand out as potential losses for the Big Ten favorite -- Alabama, Notre Dame, Michigan State, Nebraska, Ohio State -- and then there are a few others, like the home finale against Iowa, that are underrated as games that could be unexpectedly tough. The Hawkeyes essentially played us to a stalemate last year and won a game that really could have gone either way, and yeah, they lose both of the guys that really hurt us on offense -- McNutt to graduation to the NFL and Coker as yet another casualty to Angry Iowa Running Back Hating God -- but their defense was the biggest reason for the win. I'd be surprised if that defense wasn't the reason for another close game in Ann Arbor next year.