MnB B1G Preview: The Stars of the Big Ten -- Ohio State vs. Michigan in recruiting

Share All sharing options for: MnB B1G Preview: The Stars of the Big Ten -- Ohio State vs. Michigan in recruiting 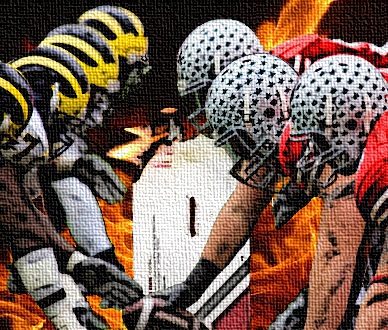 Michigan and Ohio State, for as far back as I can remember, have always dominated the B1G in recruiting. And when I say dominated, I mean it's rare someone else even comes close. Let's take a closer look at the B1G recruiting rankings since 2002 according to Rivals:

Sidenote: I chose to use the rankings from Rivals because I trust them the most and it's also easier to use one site instead of comparing 3 or 4.

As we can see, there were a couple anomalies. 2003 for Ohio State wasn't a great recruiting year, but it's also because they only had 16 recruits. Michigan State snuck in there once (2004) but they also had a whopping 31 recruits that year. I can't explain 2005 when Iowa had the second-best recruiting class in the B1G. Penn State also had a couple good recruiting years (2006 and 2010). The point, however is that Michigan and Ohio State regularly alternate between the #1 and #2 recruiting classes of the B1G almost every year. In fact, Michigan was #1 four times and Ohio State was #1 five times since 2002. If Michigan ends with the #1 class in the B1G for the class of 2013, which at this rate seems very possible, they'll be dead even with Ohio State in the last 12 years. Pretty crazy, right?

You know who they have included in their 3-star ranks? DB Gareon Conley (who ESPN ranks in the top-150 and as Michigan's second-highest ranked player after QB Shane Morris), RB Deveon Smith (who Scout ranks a 4-star and the 7th best RB in the nation), and DT Maurice Hurst Jr. (who is a 4-star on both Scout and 247).

Ohio State has one 5-star in DB Cam Burrows, whereas right now Michigan has none. This could change of course, given that we have a few 5-star caliber players committed right now (QB Shane Morris, DB Dymonte Thomas, and OL David Dawson, for example). So it's really all about the 4-stars for comparison's sake at this time.

Let's put this in perspective. Michigan's stellar 2012 recruiting class, which ended up #7 overall in the nation according to Rivals had two 5-stars, ten 4-stars, and thirteen 3-stars. Thirteen! The 2013 class currently has 6 (that number will go down) and there's probably only 3 or 4 spots left, making it HIGHLY doubtful we end with double-digit 3-star commits. And that was the #7 overall class in the nation.

Ohio State's 2012 class, which ended #4 overall in the nation according to Rivals had two 5-stars, fourteen 4-stars, and nine 3-stars. Although they are bound to have another exceptional recruiting class this year, I don't think they have more than 18-20 total spots available, which will probably prevent them from having a top-5 class nationally.

But here's why this topic is a really fascinating thing to look at:

SEC schools have 30 total commits in the ESPN top-150. Michigan alone has 11. (via @BFeldmanCBS)

Brady Hoke and Co. are compiling one of the most impressive recruiting classes in Michigan football history. It's not about the number of 5-stars or the number of top-20 recruits (currently 0 in both categories according to Rivals), but rather the overall talent and depth of the recruits in the 2013 class. A lot of OSU fans will argue that their recruits are "better" because, for example, they have 3 of the top-20 recruits nationally (DB Cam Burrows, DB Eli Woodard, and DE Joey Bosa), but the Michigan coaching staff is using a different approach.

In the Rivals100, Ohio State has the above 3 players plus ATH Jalin Marshall for a total of 4 top-100 players. Michigan, on the other hand, has 7. Let me repeat this. Rivals ranks 7 of Michigan's 21 commitments in the top-100 in the nation. This trend only continues when looking at the Rivals250 and beyond. So yes, having 3 players in the top-20 is impressive, but having 7 in the top-100 is incredible. This number should go up by the way...

When ranking the top-100 players in the nation, out of thousands upon thousands, it cannot be an exact science. The difference between the #1 player in the country and the #50 player may be substantial, but the difference between #20 and #40 is very, very minimal. But forget the numbers for a minute. Let's look at some state rankings. We all know Coach Hoke's philosophy about recruiting in the Midwest and how it's much different than the previous coaching staff's. How different exactly?

Michigan has commitments from 4 of the top 5 players in the state of Michigan and 2 of the top 5 players from Ohio. Michigan has commitments from the #1 and #2 LBs from Ohio (Mike McCray and Ben Gedeon), the #1 RB from Ohio (Deveon Smith), the #1 TE from Ohio (Jake Butt), the #1 DE from Ohio (Taco Charlton), and the #2 DB from Ohio (Dymonte Thomas). Doesn't get much better than this. Why is this exciting? Well, the Midwest seems to be stacked in 2014. Can you guys even fathom a 2014 recruiting class that's better than the current 2013 one? Well, get ready to.

So not only is the coaching staff putting together a phenomenal recruiting class for 2013, they're making friends at all the right places. If they can continue to recruit the state of Ohio at this level, the sky is the limit. Not only are Ohio athletes elite, but all the players from Ohio that Michigan gets, Ohio State does not. This is a win, win, win. I could also go into how we have commitments from the top player from the state of Colorado, the #2 player from Massachusetts, and top-5 players from Illinois, Maryland, and Pennsylvania. But I'll spare you. You get the point.

The way Michigan closes the 2013 class will be critical. Although the 2012 class finished #7 in the nation, we missed on a few key targets late in the game. This year, we only have 3 or 4 spots to fill, and many big names left on our list, namely 4* WR Laquon Treadwell. When 4* DT Henry Poggi chose Michigan over Alabama, you could just feel the tides turn (pun intended). It seemed as though the Wolverines got burned every time a top recruit was choosing between Michigan and another school (ahem, E.J. Levenberry and Ty Isaac). Poggi's commitment is not only a huge one, but is a good sign as to how this class will finish come Signing Day.

Check out how I think the 2013 class finishes.