Each Wednesday, up through August, I’ll cover a different Big Ten team or Michigan non-conference opponent. This week, I’m covering the Ohio State Buckeyes, who Michigan will play in Columbus on November 24th at 12:00 PM EST on ABC. Michigan snapped a seven game losing streak to the Buckeyes last year, with a 40-34 win in Ann Arbor. Michigan leads the series 58-44-6, but has lost 9 of the last 12 meetings. Note that the home team is 10-5 since 1997, and the favorite has won 12 of those 15 matchups. Something has to give, as Ohio State is the home team this year, but Michigan is a two point favorite, according to the Golden Nugget Las Vegas’s opening betting lines, released on June 11th.

Notes: Late last May, Ohio State fans found out that Jim Tressel would no longer be the head coach of the Buckeyes. Tressel resigned on May 30, 2011 from his position, after Sports Illustrated, just three days earlier, detailed the memorabilia-for-tattoos practice that has now become common knowledge. Quarterback Terrelle Pryor also left the program, being picked in the NFL’s Supplemental Draft by the Oakland Raiders. Last season was a horror for Ohio State fans, as the Buckeyes experienced only their sixth losing record in conference play since 1945. It was also their first losing season since 1999. Urban Meyer was hired by the Buckeyes in November, re-energizing the fan base. Meyer brings an offensive intensity and style that Tressel’s teams lacked.

BVTSB Take: The Buckeyes lost their last four games of the season in 2011. Ohio State was 2-6 in games decided by a touchdown or less, compared with a mark of 6-4 in the previous four seasons. Ohio State loses four players to the NFL, despite the poor season – OT Mike Adams, WR DeVier Posey, RB Daniel Herron, and S Nate Ebner. RB Jamaal Berry left the team in February and LB Jordan Whiting has transferred to Louisville. The Buckeyes return quarterback Braxton Miller, who should improve on last season’s numbers. Miller would have to adjust to the new style of offense, which will open up the game a bit more. He threw for over 1100 yards and 13 touchdowns in ten starts. Miller completed double digit passes in only two games – Michigan and Florida. Braxton also ran for over 700 yards and 7 touchdowns, as Ohio State’s leading rusher last season. Carlos Hyde had 106 carries in 2011, the third most of any Ohio State player. He also has six touchdowns rushing and will be back in the fall. Expect Jordan Hall to start, though. Leading receivers Devin Smith and Corey Brown will be back, providing some continuity for the Buckeyes and Miller. The year to develop, especially with spring practices, should be a boon for Miller. Smith and Brown combined for nearly 500 yards receiving and five touchdowns, despite the fact that passes only accounted for 30% of the offensive plays. Tight end Jake Stoneburner’s status for 2012 is uncertain, following off the field problems. Stoneburner should be back, but he may sit out a game or two. Like Smith and Brown, Stoneburner had 14 catches. His seven touchdowns were the most of any Buckeye receiver last season. Ohio State was 4-0 in non-conference play in 2010, though the wins were technically vacated. The 2007 team was the last one, before then, to go 4-0 in non-conference play. This year’s team has a great chance to replicate that, with games against Miami (OH), UCF, California, and UAB to open the year. UCF is the favorite to win Conference USA, but shouldn’t be any match for a more skilled Ohio State team. The Buckeyes, while they could have the best record in the Leaders Division, is ineligible for the Big Ten Title. Road games against Michigan State, Penn State and Wisconsin could be tough, as could home games against Nebraska and Michigan. Still, expect Ohio State to be much improved from last season. Double digit wins, even without a bowl appearance, are not out of the question. 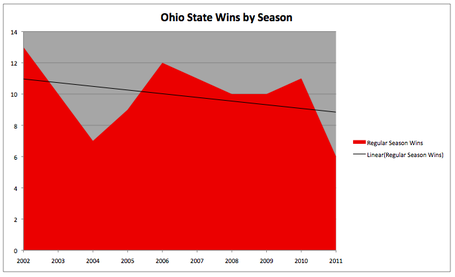 What are your thoughts on Ohio State football? Tweet to us @BVTSB.