Each Wednesday, up through August, I’ll cover a different Big Ten team or Michigan non-conference opponent. This week, I’m covering the Nebraska Cornhuskers, who Michigan will play in Lincoln on October 27th. Michigan leads the series 4-2-1. Michigan won last season 45-17, in Ann Arbor. The teams have traded wins in their last four meetings. According to the Golden Nugget Las Vegas’s opening betting lines, released on June 11th, Michigan opens as a two point favorite at Nebraska.

Notes: Coach Bo Pelini arrived at Nebraska via LSU, where he was defensive coordinator from 2005-2007. But Pelini is familiar with the Big Ten, having played at Ohio State, as a free safety, under Earle Bruce and John Cooper; he’s a native of Youngstown, Ohio – Buckeye country. He also started his coaching career as a graduate assistant with Iowa. Ever since Tom Osborne retired from Nebraska, the ‘Huskers have struggled to find a suitable replacement. It was a tough task to begin with, considering Osborne won nearly 84% of the games he coached, including 87% in the Big 8/Big 12. In his last five seasons, he was an astounding 60-3, 43-1 in conference (last conference loss was on November 14, 1992 – his last game coached was on January 2, 1998). Frank Solich and Bill Callahan followed him, posting records of 58-19 and 27-22, respectively. In fact, Callahan snapped a 35 game bowl appearance streak, during which the ‘Huskers were 19-16. It’s a lot to ask to expect Pelini to return Nebraska to Osborne-like levels, but he certainly has surpassed the work Callahan and Solich did.

BVTSB Take: Pelini’s forte is defense, without a doubt. But his biggest replacement will be on his staff, as his brother, former defensive coordinator Carl Pelini, will be the head coach at Florida Atlantic. Defensive ends and special teams coach John Papuchis will be the defensive coordinator. Papuchis has been with Pelini since his hire in 2008. Tim Beck will again be offensive coordinator, his second season. Quarterback Taylor Martinez is a junior this year. While he and Pelini have had a love-hate relationship, they will need to work together if they want to deliver Nebraska fans a divisional title. Martinez completed only 56% of his passes and had a 13:8 touchdown-to-interception ratio in 2011. He simply needs to make better decisions this year. Still, he was the second leading rusher for the ‘Huskers, accounting for 874 yards rushing and 9 rushing touchdowns. The always-dangerous Rex Burkhead, a senior, rushed for over 1300 yards and 15 touchdowns last year, 46.4% of all of Nebraska’s rushing attempts. Two of the three leading receivers return for Nebraska – Kenny Bell and Quincy Enunwa. Bell and Enunwa had a combined 754 yards receiving and five touchdowns last year. My cause for concern is the youth of Nebraska’s offensive line, as they only return two of their five starters. Burkhead will need to be patient and help the offensive line, especially early in the season. The offensive line shouldn’t be an issue in the first couple games, as the ‘Huskers face Southern Miss, UCLA, Arkansas State, and Idaho State in non-conference, with the UCLA game being on the road. Then, Nebraska gets thrown into the fire, as the face Wisconsin, Ohio State (in Columbus), and Michigan in three of their first four games. The back half of the schedule is much more manageable, with games against Michigan State and Iowa, both on the road, being the only real tests. A home game against Michigan could be the reason why the ‘Huskers make a December trip to Indianapolis, if they do. 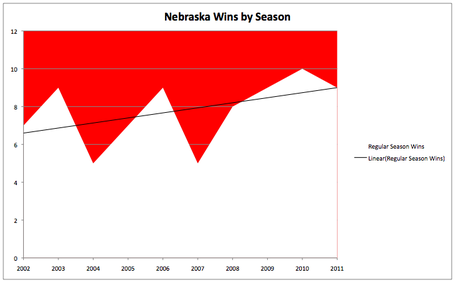 What are your thoughts on Nebraska football? Tweet to us @BVTSB.