Share All sharing options for: Introducing the Two-Deep: J.T. Floyd

When J.T. Floyd committed to Michigan almost two weeks after the Wolverines beat the Florida Gators in Lloyd Carr's swan song, everything seemed to be as it should be. Carr was riding off into the sunset, Rich Rodriguez was taking over and ready to usher Michigan into the 21st century, and Floyd -- a three-star from South Carolina who decommitted from Tennessee and had offers from a handful of regional BCS schools -- jumped on board. Since then, he's had an eventful career: redshirting in the horror show that was 2008, stepping in after Boubacar Cissoko got kicked off of the team in 2009, becoming a starting cornerback and featuring in the worst Michigan secondary of all time in 2010, and then evolving into a solid starter with the help of newly competent coaching in 2011. Now Floyd, fifth-year senior and elder statesman of the defense, is locked into the starting spot at boundary corner and is yet another sign of Michigan's newfound defensive stability, especially in the secondary.

Back in the February of 2008, before Rich Rodriguez had ever coached a game at Michigan and way before Cissoko decided to go crazy and rob a pizza guy, Brian had this to say about the defensive backs in the Class of '08, and about Floyd more specifically:

Projection: Though [Floyd] is being brought in as a corner a move to safety is likely given the above, where he'll probably end up buried behind Stevie Brown, Artis Chambers, Stewart, and maybe Brandon Smith until his junior year, at which point he might develop into a contributor.

It's a pretty interesting post and I'd recommend going back and reading it, but out of those three defensive backs Cissoko was booted off of the team and is now in jail and Brandon Smith eventually transferred to Temple. Floyd was, by far, the lowest-rated recruit of the three -- Cissoko was a Top-50 guy and Smith was in the Top-100 range -- but he's been the only one to stick around. The attrition during the Rodriguez era has been discussed a lot, but seriously, it was really bad, especially in the defensive backfield. Never forget.

Anyways, Floyd came in without much fanfare, and didn't wind up making the move back to safety despite his size (which was good) and speed (which was not). After he took an expected redshirt in 2008, he was a primary backup behind Boubacar Cissoko and Donovan Warren in 2009. He didn't play much until Cissoko's departure, but he started the final two games after that and finished with 17 tackles on the year. After Warren declared for the draft early, and considering that the secondary depth was, to put it gently, godawful, Floyd was an extremely important player heading into 2010. When Troy Woolfolk broke his ankle, everyone braced for the worst.

It was the worst defense Michigan's ever had, and that's not an exaggeration. Cam Gordon, now a rush linebacker, was the starting free safety. James Rodgers, who moved back and forth from receiver to corner more times than I can count, was the other starting corner. Ray Vinopal, a Martavious Odoms-sized two star freshman, eventually started for a time. Courtney Avery probably should have redshirted, but played a lot at 170 pounds. Michigan's defense was 110th nationally in total yardage allowed, 108th in scoring defense, and 112th in pass defense.

J.T. Floyd started every game before breaking his ankle in practice before the infamous Illinois shootout, and he certainly received his share of the blame for the complete and utter debacle that was Michigan's pass defense in 2010. Floyd was frequently out of position, often due to his giving of a 10-yard cushion to every receiver on every play. He was nickle-and-dimed to death and had a high tackle total as a result (sixth in the Big Ten in tackles per game, which, for a cornerback, is very, very bad), but this extreme conservatism on the part of the defensive coaching staff was designed to prevent Floyd from getting beaten deep. It often happened anyways. Floyd's shortcomings were magnified every time he went up against another team's number one receiver -- he was too slow to keep up on deep balls and wasn't quick enough to get a good jump on shorter routes. It looked very much as if Floyd was a safety stuck at corner, which he essentially was, not that there was much of an alternative. 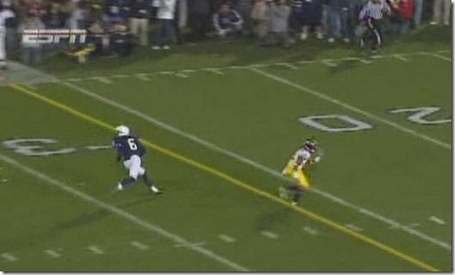 Here were Magnus's thoughts on Floyd leading up to the 2011 season:

This year there are three corners who have started - Floyd, Woolfolk, and sophomore Courtney Avery. I expect the latter two to win the starting jobs, which leaves Floyd to battle with incoming freshmen for the #3 corner job. He's a solid backup to have on the team and can spell the starters if necessary, but unfortunately for him, he's just a little behind most of the other guys in athleticism.

Brian was similarly pessimistic about Floyd in his preview of the 2011 secondary, and that sentiment was pretty much shared by everyone -- our last collective memory of him was that Penn State game (and the picture above adequately summarized Floyd's play in that game). Between Woolfolk, Avery, and hyped freshman Blake Countess, many of us didn't think Floyd would start, and at the very least, we didn't think he'd be solid if he did play a lot.

J.T. Floyd wound up starting 12 games last year, and despite his physical limitations and the years of coaching that he suffered from Tony Gibson, he was actually good? Early on in the season, he did struggle mightily against Michael Floyd, but for the most part, he played well, even against some very solid receivers. Floyd never was able to play press coverage and his recovery speed was iffy, but he always seemed to be in position, hardly ever gave up the big play, and every once in a while, stepped in for a nice pass breakup or interception. He had issues covering DeVier Posey late in the season and bit on a double move that almost cost Michigan the game against Ohio State, if not for Braxton Miller's erratic arm. Floyd recovered for the Sugar Bowl though, and turned in a nice performance against a pretty decent receiver in Jarrett Boykin.

Floyd's best showing was against A.J. Jenkins and Illinois. In a game where Michigan's defense was perhaps at its most dominant, Floyd held Jenkins to eight catches for 103 yards, which on its own, doesn't seem that impressive. Those eight catches came on over 20 targets though, and Floyd was instrumental in preventing Jenkins from a.) getting catches and b.) getting many yards after the catch. Add in an impressive interception on a short curl to Jenkins (a play that victimized Floyd over and over again in 2010), and it was a career day for Floyd against the Illini star, who was later eventually drafted in the first round of the NFL Draft by San Fransisco. It was that Illinois game when Michigan's defense really looked like a very good unit, and to his credit, Floyd looked like an above-average starter. This was a year after the Rodriguez-Robinson-Gibson defensive meltdown, and it's a testament to the coaching prowess of Brady Hoke, Greg Mattison, and Michigan's position coaches (Curt Mallory in particular) that J.T. Floyd and the Michigan defense wasn't just competent, it was good. Until that point, he was solid in that cautiously optimistic let's-hope-he-doesn't-screw-up way that being tenuously average is, but that Illinois game cemented Floyd as a player who was a net plus, not as a guy who started simply because he was marginally better than those behind him.

Now, as we approach J.T. Floyd's fifth and final year at Michigan, there's little mystery about him as a player. His ceiling is admittedly low: he's not going to get much faster, and even though he's over six feet tall, he's not going to have elite size. After struggling mightily in the early part of his career, subsequently purging all of the terrible coaching he received from Tony Gibson, and becoming a solid Big Ten starter, it's been an up-and-down career for the former three-star from South Carolina. Fortunately for Floyd, and fortunately for us, it seems as if he's turned the corner and is set to have a solid senior season. Phil Steele has Floyd as a second-team Big Ten corner entering the season, and that's where his ceiling is: he's not going to be an elite player, but he could have the best season of any Michigan corner (depending on how far Blake Countess is along in his development) and he should be what every corner should be: good enough not to notice him. Every once in a while, there's a transcendent talent that turns the cornerback position into an impressive array of jarring tackles, breathtaking interceptions, and unforgettable plays. Floyd won't ever be that. Still, he once was the scapegoat that seemed to do everything wrong, and now, as he reaches the end of his career as a Wolverine, J.T. Floyd finally should be that perfectly solid corner that isn't unforgettable, but not for the wrong reasons.