Each Wednesday, up through August, I’ll cover a different Big Ten team or Michigan non-conference opponent. This week, I’m covering the Purdue Boilermakers, who Michigan plays to open the Big Ten schedule, on October 6th at 4:00 PM at Ross-Ade Stadium. Michigan has dominated the series, 43-14, winning in 2010, 27-16, but falling in a shootout in 2008, 48-42.

Notes: Coach Danny Hope made his first bowl game with the Boilermakers this past season, defeating the Western Michigan Broncos 37-32 in the Little Caesars Pizza Bowl. Purdue hadn’t been to a bowl since the 2007, when the team was at the Motor City Bowl (predecessor to the Little Caesars Bowl) under then-coach Joe Tiller. Coach Hope received a contract extension at the conclusion of last season, keeping him with the Boilers until the end of the 2016 season. The extension is good timing for Hope, who will have to replace veteran players at key position. Clearly the athletic department is committed to Hope, despite only one bowl game in three seasons.

BVTSB Take: Purdue will have to replace captains Chris Carlino (linebacker) and Dennis Kelly (offensive tackle). Key starters Logan Link (safety), Nick Mondek (offensive tackle), Carson Wiggs (kicker), Justin Siller (wide receiver), and Jared Crank (fullback) have graduated. Quarterbacks Robert Marve and Caleb TerBush return this season. They split time in 2011, with TerBush seeing more time. TerBush threw for over 1900 yards, 13 touchdowns and 6 interceptions, while Marve threw for over 600 yards, 4 touchdowns and 5 interceptions. Running back Akeem Shavers will return for his senior season. Shavers is expected to be the top running back on the depth chart, but did not see time in the spring game, due to precautionary reasons. Running back Ralph Bolden is expected to miss the entire season after tearing his ACL in the regular season finale against Indiana. Expect wide receivers Antavian Edison and O.J. Ross to play big roles at the wide receiver position. Edison had 584 receiving yards, averaging 13.3 yards per catch, and three receiving touchdowns in 2011. Ross had 356 receiving yards and three receiving touchdowns. In 2011, the Boilers split their non-conference games, defeating Middle Tennessee and Southeast Missouri State, while losing to Rice and Notre Dame. Purdue should beat Eastern Kentucky and Eastern Michigan in 2012, while Notre Dame and Marshall could pose problems. Still, 3-1 in non-conference play is likely. With that said, the home slate is tough, as Purdue hosts Michigan, Wisconsin, Penn State, and Indiana in 2012. The road games are more manageable, as Purdue faces Ohio State, Minnesota, Iowa, and Illinois. A bowl game is possible, but Purdue will need to beat Indiana and pick up a road win or two in order to assure post-season play. Replacing reliable Carson Wiggs will be tough; replacing Jared Crank is equally as tough. 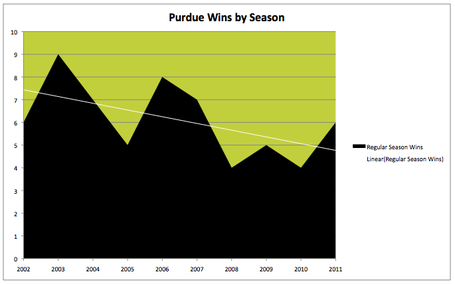 What are your thoughts on Purdue football? Tweet to us @BVTSB.