Notes: Since 1960, Michigan State never had back-to-back double digit win seasons, that is, until 2010 and 2011. The Spartans, behind the arm of quarterback Kirk Cousins, posted undefeated records at home in those seasons, earning a berth in the inaugural Big Ten Championship game last season. Cousins has graduated and now Dantonio and the Spartans must find a suitable replacement for him. Many of the pieces of the Big Ten Legends Division Champs are gone, but the offensive line is largely intact. Its no secret that a once successful program under Duffy Daugherty and George Perles fell on hard times. Nick Saban put competitive teams on the field, but the Board of Trustees refused to extend his contract, leading to his departure for Baton Rouge. Coaches Bobby Williams and John L. Smith were an absolute disaster in East Lansing. The hire of Dantonio in 2007 was questioned, but he has turned the Spartans into a Big Ten contender and has shown the ability to win four straight against rival Michigan. In October of last year, Dantonio became a "Spartan for life" with his contract extension by Athletic Director Mark Hollis.

BVTSB Take: MSU’s perceived weakness last season is their strength this season – the offensive line. C Travis Jackson (10 starts in 2011), RG Chris McDonald (14 starts in 2011), RT Fou Fonoti (11 starts in 2011, played in all 14 games), and LT Dan France (13 starts in 2011) all return as starters from last year’s team. Only LG Blake Treadwell lacks experience on the offensive line, starting only three games at center in 2011 before missing the season to injury, but he saw time at nose tackle in 2010. As previously mentioned, the Spartans lose three-year starter Kirk Cousins to graduation – he was drafted by the NFL’s Washington Redskins. Cousins passed for at least 2600 yards in each of the seasons he started (throwing for over 3300 yards last season) and at least 19 touchdowns in 2009, 2010, and 2011 (25 touchdowns last year). Simply put, this is a huge loss. Andrew Maxwell projects to be the starter for the Spartans, but he has only attempted 51 passes in two years. Connor Cook is projected to backup Maxwell. Maxwell can rely on running back Le’Veon Bell, especially early, though. Bell rushed for 948 yards last season, including 13 touchdowns. The Spartans lose running back Edwin Baker to the NFL’s San Diego Chargers (665 yards rushing and five touchdowns), but Larry Caper does return (116 rushing yards and one touchdown). Where experience is lacking the most is at wide receiver, where B.J. Cunningham, Keshawn Martin, and Keith Nichol all depart. The trio, and TE Brian Linthicum, combined for 70% of MSU receptions, 79.2% of yards receiving, and 73% of touchdown catches. Cunningham went over 1300 yards receiving last year and had 12 touchdown catches, alone. Needless to say, MSU will need to rely heavily on the run game this year, especially with the veteran presence on the line and in the backfield. Michigan State had six players drafted from the 2011 team, the previously mentioned Cousins and Baker, as well as DT Jerel Worthy (Green Bay Packers), WR Keshawn Martin (Houston Texans), S Trenton Robinson (San Francisco 49ers), and WR B.J. Cunningham (Miami Dolphins). The Spartans were 301 in non-conference last season, beating Youngstown State, Florida Atlantic and Central Michigan, but falling on the road to Notre Dame. MSU plays Boise State, Notre Dame, and Eastern Michigan at home, but travels to Central Michigan this year; they are more than capable of going 4-0 in non-conference. MSU does hit the road to play Michigan and Wisconsin on back-to-back weeks, at least one of which could be a loss. Home games against Ohio State, Iowa, and Nebraska, are no gifts, either. The passing game will be the key – the win projection is very conservative as of right now, and could be higher once the season starts. 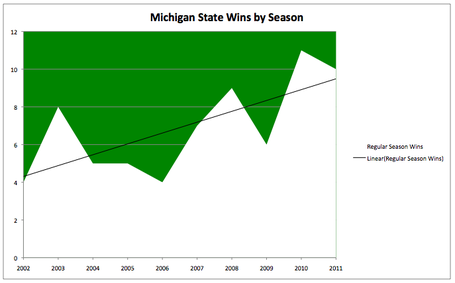 What are your thoughts on Michigan State football? Tweet to us @BVTSB.