The Biggest Needs for the 2014 Class & Michigan's Options

Share All sharing options for: The Biggest Needs for the 2014 Class & Michigan's Options 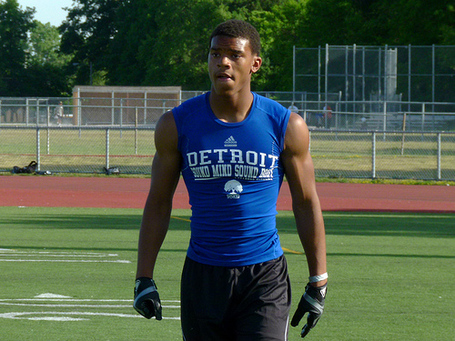 Now that the 2013 recruiting class is coming to a close (yes, I realize it's only July), it's again time to look to the class of 2014. I've already written about Michigan's options at quarterback for the class and also about who the top Midwest prospects of the class are. But what positions are Michigan's biggest needs for the 2014 class?

One glaring need, as previously discussed, will be the quarterback position. Devin Gardner will have graduated and the only scholarship QBs left will be Russell Bellomy and Shane Morris. As long as Morris lives up to expectations (which are unprecedented by the way), all we'll need is a serviceable quarterback in the 2014 class, not one of the top QBs in the nation, for example. It looks like the coaching staff is taking their time in deciding who this quarterback will be since no offers have been given out to 2014 quarterbacks thus far, even though there have been 50+ offers given out already.

Another position of need will be running back. It's true that the 2013 class already has commitments from DeVeon Smith and Wyatt Shallman, but unless Michigan lands a top RB like 5* Derrick Green to close out the class, the coaching staff will probably be looking to snatch a top running back for the 2014 class. They already have offers out to four of the top running backs in the class.

Lastly, cornerback will again be a priority position. The 2013 class has commits from (future stars in my opinion) Jourdan Lewis and Gareon Conley, but barring a commitment from 5* Kendall Fuller or 4* Leon McQuay III, cornerback will be a big need for the 2014 class. For the record, I believe Michigan will have a great shot at landing McQuay III, but as far as Fuller, he has all but eliminated Michigan from the race.

So who are the options for these positions? Who do I think will fill them?

I've already discussed Michigan's options at quarterback for the 2014 class, and there are quite a few. I'm not sure who the coaches will end up offering or who they're going to go after the hardest, but I would put my money on in-state quarterback prospect Chance Stewart. He is a Michigan product who is a prototypical QB with a huge upside and has grown up a Michigan fan. Ohio QB DeShone Kizer is another realistic option, but I'm leaning more towards Stewart mainly because Kizer is a dual-threat QB.

Like I said, Michigan has offered 4 of the top running backs in the 2014 class. This will be a serious need if Michigan can't land 5* RB Derrick Green in the 2013 class and will probably still be a considerable need even if Michigan does land him. As a side note, I do believe there is a good shot at landing Green. Options:

Leonard Fournette - Fournette is ranked a 5-star running back on 247 Sports, which is currently the only scouting service that provides 2014 rankings. He is a 6'1" and 215-pound back from New Orleans, LA who already holds offers from schools like Michigan, Alabama, Florida, LSU, Notre Dame, and Texas. Crazy, right? As a freshman, he rushed 174 times for 1,735 yards and 22 touchdowns. That's an average almost 10 yards per carry. Here is a great story by ESPN on Fournette and how he he survived in New Orleans after Hurricane Katrina.

Jonathan Hilliman - Hilliman is a running back out of Jersey City, New Jersey who stands 6'0" and 201 pounds. Hilliman holds offers from schools such as Michigan, Miami (FL), Nebraska, Ohio State, Oregon, Penn State, and Wisconsin. Impressive considering how early it is. As a sophomore, Hilliman had 65 carries for 632 yards and 8 touchdowns. That's as a backup. Hilliman plans on visiting Michigan soon, and has considered coming up for the BBQ at the end of the month.

Bo Scarbrough - Scarbrough is a beast of a running back who 247 ranks an early 5-star and also the 7th best player in the 2014 class. Scarbrough is an interesting story. He is a 6'2" and 218-pound athlete from Tuscaloosa, AL who can play running back and wide receiver. He has also been rumored to be the half-brother of 2013 5* LB Reuben Foster. The reason this is interesting is because Scarbrough was thought to have been favoring Alabama since his apparent half-brother was committed there. He even announced he was going to be committing to his future school last week. Then Foster held a conference and switched his commitment from Alabama to Auburn (and also got a huge forearm tattoo to show his loyalty) at which point Scarbrough said he no longer wanted to commit this early. This obviously leads one to think that Scarbrough no longer wants to commit to Alabama and is now taking his time in order to seriously consider Auburn so he can play with his half-brother. None of this really matters. They may not even be half-brothers, but the point is, if Scarbrough is pushing back his commitment date, this gives Michigan a shot. Even if it's a small shot, it's a shot. Let's not forget, the guy has offers from schools like Michigan, Alabama, and Florida, and the offers will surely keep on coming. Ironically, he does not yet have an Auburn offer.

Others with offers: Jalen Hurd

Corey Holmes - Holmes is a receiver out of Fort Lauderdale, FL who stands 6'1" and 172 pounds. He currently holds offers from Michigan, Florida, and Wisconsin, to name a few. Holmes has said he has grown up a Michigan fan, and actually wrote a diary-style entry for Tremendous on how he felt after receiving his Michigan offer. It is definitely worth a read. It sounds like Michigan is his early leader, and hopefully it continues to stay that way. Holmes is a playmaker.

Josh Malone - Malone is a receiver who is ranked an early 4-star by 247 and stands 6'2" and 185 pounds. He is from Gallatin, TN and holds offers from schools like Michigan, Nebraska, Ohio State, and Tennessee. As a sophomore, he had 23 catches for 704 yards and 13 touchdowns. Malone has unofficially visited Michigan but Coach Hoke wasn't on campus at the time. He came away impressed but did not name any leaders. It looks to me like this may be a Michigan-Ohio State battle.

Ja'vone Harrison - Harrison is an athlete out of Lakeland, FL who stands 6'2" and 193 pounds and can play wide receiver and cornerback. He holds offers from Michigan and a few MAC schools. I believe Michigan was his second offer, so they obviously see something special in him. His favorite player is Charles Woodson, so he checks out in my book. Harrison plans on visiting Michigan this summer and although it's been said that he favors Virginia Tech, anything can change with his recruitment. As a sophomore, Harrison had 17 receptions for 361 yards and 2 touchdowns at receiver. He also saw time at corner and safety.

Malik McDowell - I've written about McDowell when I wrote about the top Midwest prospects for the class of 2014. McDowell would be huge for Michigan and is definitely a name you ought to know.

Joe Henderson - Henderson is a DE out of Cleveland, OH who stands 6'4" and 220 pounds. He is high on Michigan early, but it may be because Michigan is his only offer thus far. Yes, you read that correctly. He holds one offer and it's from Michigan. Hopefully this is a good sign, as first offers always stick with the prospect. We'll learn more as time goes on.

Da'Shawn Hand - Hand is considered the top player of the 2014 class. 247 ranks him an early 5-star and he is already 6'5" and 247 pounds. Not only that, but apparently he also runs a 4.6 40-time. Hand is an absolute freak from Woodbridge, VA and holds offers from almost every school including Michigan, Alabama, Auburn, Florida, Notre Dame, and Ohio State. He reportedly has a really good relationship with the Virginia Tech coaches and some even think he's a V-Tech lean. As a sophomore, he had 84 tackles and 21 sacks. That's right, as a sophomore. You know how most athletes claim they want to go to a school with good academics? Hand is very serious about this. He has stated multiple times how important academics are because life goes on after football. Hopefully this trend continues and he gives Michigan a legitimate shot. Tremendous landed a great interview with Hand and he really seems like a great kid. He will be a complete game-changer.

Damon Webb - Webb is a Cass Tech (woo!) athlete who plays both corner and wide receiver. He stands 5'11" and 170 pounds and has grown up a Michigan fan. There have been plenty of rumors that Webb was going to commit to Michigan and many people believe it's only a matter of time. His parents, however, want him to take his time with his recruitment and to visit multiple schools. He seems to be getting a new offer after every camp he attends and already holds offers from schools like Michigan, LSU, Ohio State, and Wisconsin. Even though his name is known in the 2014 class, I believe he is still underrated. Webb is the next top corner out of Cass Tech, following in the footsteps of Terry Richardson (2012 Michigan signee) and Jourdan Lewis (2013 Michigan commit). He is a lock-down corner who's recruitment will continue to blow up. I believe Webb ends up a Wolverine, hopefully sooner rather than later.

Jabrill Peppers - Peppers is a corner out of Ramsey, NJ who 247 gives an early 5-star ranking. Actually, they rank him the 3rd overall prospect in the entire 2014 class. Peppers is an exceptional athlete who stands 6'1" and 200 pounds and who holds offers from likes of Michigan, Alabama, LSU, Florida, Notre Dame, Ohio State, Oklahoma, and USC. Peppers plans on attending a Michigan game this fall, and it's vital that we get him on campus. As a sophomore, he had 80 tackles and 4 interceptions. Peppers told Tremendous that he grew up rooting for Michigan and his favorite players were Mike Hart and Mario Manningham. Definitely a good sign, but again, it will be important to get Peppers on campus.

Jalen Tabor - Tabor is given an early 4-star ranking by 247 and is also the 20th best player in the 2014 class. He is a corner out of Washington, DC and stands 6'1" and 181 pounds. Tabor already holds over 25 offers from schools like Michigan, Alabama, Auburn, Florida, Miami (FL), Notre Dame, and Ohio State. As a sophomore, he had 27 tackles and an interception returned for a touchdown. Tabor will be a hard pull, as he has already named Alabama his early favorite. He plans on taking it easy this summer but hopefully will visit campus either this fall or next summer.

Now you all know how recruiting works. Michigan already has 50+ offers out to 2014 prospects, with many more on the way. The names above will become very well-known, but many more will also arise. As long as Michigan can land the top Midwest prospects in the class of 2014, especially because the Midwest is deep in the '14 class, it should be in good shape. As always, we'll keep you apprised.