Each Wednesday, up through August, I’ll cover a different Big Ten team or Michigan non-conference opponent. Today I’m covering the Wisconsin Badgers, who Michigan does not play this season. Wisconsin, instead, plays Nebraska, Minnesota, and Michigan State out of the Legends Division.

Notes: Wisconsin has put together three straight double digit win seasons. From 1960 until 1992, Wisconsin had zero double digit win season – their highest win total was 7. Under Barry Alvarez, who was hired in 1990, had four double digit win seasons. In just six seasons, Coach Bielema has already matched that feat. The Badgers have built a great program and enter the 2012 season as the favorite to win the Big Ten Leaders Division, especially with Ohio State being ineligible to win the division. Last year, the Badgers won the inaugural Big Ten Title, avenging a 37-31 loss to Michigan State in East Lansing, by defeating the Spartans in Indianapolis, 42-39. For the second straight year though, the season ended on a sour note, as Wisconsin made their second straight trip to the Rose Bowl, losing again by single digits.

BVTSB Take: For the second year in a row, Wisconsin welcomes a transfer quarterback who is expected to be under center. Last year, Russell Wilson impressed his teammates in spring ball, despite having been previously at North Carolina State. His teammates rallied around him, earning him captain status. Wilson threw for 3175 yards and 33 touchdowns last season – he will be a member of the NFL’s Seattle Seahawks. Maryland transfer Danny O’Brien will take over the starting role. O’Brien threw for 1648 yards, 7 touchdowns, but 10 interceptions in 2011 after throwing for 2438 yards, 22 touchdowns, and 8 interceptions in 2010. Expect O’Brien’s numbers to improve from 2011, but reaching Wilson’s numbers would be unrealistic. One of the best running back tandems in the country returns, Montee Ball and James C. White. Ball rushed for 1923 yards and 33 touchdowns in 2011, while White rushed for 713 yards and 6 touchdowns. Expect Ball’s numbers to drop a bit, especially with a more inexperienced offensive line. C Travis Frederick and LT Ricky Wagner both return – the two combined for 27 starts last season. The caution with Frederick is that most of his starts were at LG. RG Dan Voltz, LG Ryan Groy, and RT Rob Havenstein fill out the rest of the line. Groy played in 14 games last year, while Havenstein played in 12. Voltz is a true freshman. Wide receiver Jared Abbrederis should help O’Brien’s transition to Wisconsin’s playbook. Abbrederis led all Wisconsin receivers with 933 yards receiving and was second with 8 touchdowns. Starting along side Abbrederis will be Jeff Duckworth, who had 15 catches for 230 yards and one touchdown in 2011. Wisconsin faces Northern Iowa, Oregon State, Utah State, and UTEP in non-conference – one of the weakest non-conference schedules of any Big Ten team. Wisconsin should be 4-0 heading to Lincoln. They face tough road tests against Nebraska and Penn State and tough home games against Michigan State and Ohio State. Because the Buckeyes are ineligible for the divisional title and the Big Ten Title, Wisconsin should be the hands down favorite to win the Big Ten Leaders Division. 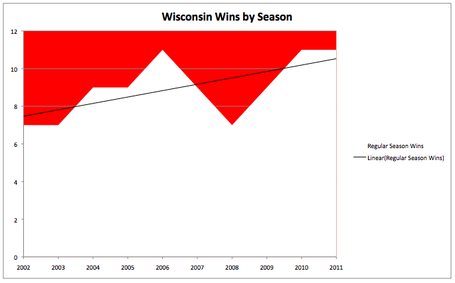 What are your thoughts on Wisconsin football? Tweet to us @BVTSB.