Each Wednesday, up through August, I’ll cover a different Big Ten team or Michigan non-conference opponent. Today’s edition is a bit of a special, as I still have a non-conference opponent to cover, the Alabama Crimson Tide, who Michigan will play in Arlington, Texas on September 1st at 7:00 PM EST on ABC. Michigan leads the series 2-1, with all prior meetings taking place in bowl games. The most recent meeting was in the 2000 Orange Bowl, with Michigan pulling out the 35-34 win in overtime. According to the Golden Nugget Las Vegas’s opening betting lines, released on June 11th, Michigan is a 12 point underdog to Alabama. Alabama is 18-2 in non-conference regular season games under Coach Saban, with the last loss taking place to Louisiana-Monroe, 21-14, on November 17, 2007, at historic Bryant-Denny Stadium.

Notes: For the second time in three years, Alabama is coming off a BCS National Championship. However, since the BCS Championship started, at the conclusion of the 1998 season, the previous year’s champion hasn’t fared all that well in the following season. BCS Champions, not including 2011 Alabama, are a combined 167-5 in the year they win the title (average of 12.8-0.4), but are just 133-35 the following season (average of 10.2-2.7). The past two champions, 2009 Alabama and 2010 Auburn, each had at least three losses the following season. In each of his previous two National Titles, Coach Saban lost three games the next season (2003 LSU National Title, 2004 LSU 9-3; 2009 Alabama National Title, 2010 Alabama 10-3), what will happen in 2012?

BVTSB Take: Last year, Alabama became the first team, in BCS history, to win the National Championship without winning their conference. They became only the second team to appear in the BCS National Championship without having won their conference (2003 Oklahoma). The offensive line will anchor the Crimson Tide this year, led by returning starters C Barrett Jones (11 starts at LT in 2011), RG Anthony Steen (13 starts in 2011), LG Chance Warmack (13 starts in 2011), and RT DJ Fluker (13 starts in 2011). LT Cyrus Kouandjio will take over for Jones; Jones will take over for the graduated William Vlachos, who signed as a free agent with the Tennessee Titans. Quarterback AJ McCarron won’t have to worry about competition from Phillip Sims, who has transferred to Virginia. McCarron threw for 2634 yards and 16 touchdowns last year. Expect those numbers to increase with the greater emphasis on the pass. Running back Trent Richardson is now a member of the NFL’s Cleveland Browns – he rushed for 1679 yards and 21 touchdowns last season. Eddie Lacy will take over as the top back (674 rushing yards, 7.1/carry, and seven rushing touchdowns in 2011), but expect freshman TJ Yeldon to see significant time. Expect Dee Hart, who is coming off a torn ACL, to be buried a bit in the depth chart. Alabama loses Marquis Maze and Darius Hanks at wide receiver – the duo combined for 955 yards receiving and two touchdowns last season. Despite the loss of those receivers, expect the wide receiver production to be up, especially with the greater responsibility McCarron will be expected to shoulder. Kenny Bell (255 receiving yards and two touchdowns in 2011) and Kevin Norwood (190 receiving yards in 2011) will start at wide receiver in 2012. Duron Carter was expected to start, but left Alabama for Florida Atlantic, after being ineligible last year. Despite the inexperience in the secondary, outside of CB Dee Milliner and SS Robert Lester, expect the pass defense to be strong – Saban personally coaches the secondary. The linebacking corps and pass rush are among the best – teams with weak or inexperienced offensive lines will struggle against Alabama. Alabama opens with Michigan, Western Kentucky, and Florida Atlantic in three of their first four games. They play Western Carolina the week before the Iron Bowl. Alabama hosts Auburn, but travels to Arkansas and LSU this year. Expect Alabama to be strong in 2012, but two or three losses are not out of the question. The early projection should be considered a ceiling. 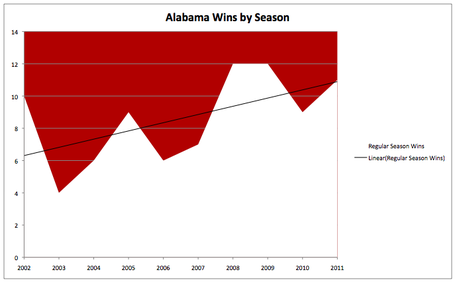 What are your thoughts on Alabama football? Tweet to us @BVTSB.