Each Wednesday, up through August, I’ll cover a different Big Ten team or Michigan non-conference opponent. Today I’m covering the Notre Dame Fighting Irish who Michigan will play in South Bend, Indiana on September 22nd at 7:30 PM EST on NBC. Michigan leads the series 23-15-1. The Wolverines have won three straight and five of the last six against the Irish. Each of the last three games were decided in the closing minutes, with four points being the margin of victory each time. According to the Golden Nugget Las Vegas’s opening betting lines, released on June 11th, Michigan is a 1-point underdog to Notre Dame. Of the last 13 meetings, the home team is 10-3, but 9 of those meetings have resulted in the underdog winning (including four straight and seven of the last eight).

Notes: Bob Davie was 16-9 through his first two seasons at Notre Dame, he went 5-7, 9-3, and 5-6 and was fired by the school at the conclusion of the 2001 season. Davie’s replacement, Ty Willingham, was 15-10 in his first two seasons, going 6-5 in his third, and final season, 2004. Charlie Weis has had the best record in his first two seasons since Lou Holtz left South Bend, with a record of 19-6. However, he went 3-9, 7-6, and 6-6 and was fired at the conclusion of the 2009 season. Kelly’s record is very comparable to Davie’s and Willingham’s, each who faltered in their third seasons. Suffice it to say, the third season is a very important one for Coach Kelly – he’s entering the season with a new offensive coordinator and possibly a new quarterback.

BVTSB Take: Former offensive coordinator Charley Molnar has taken the head coaching job at Massachusetts (Weis’s offensive coordinator, Michael Haywood, accepted the Miami University head coaching job following the 2008 season; the 2009 season would be Weis’ last in South Bend). Entering spring practices, Andrew Hendrix was thought to be a favorite to win the starting quarterback job. Hendrix attempted 37 passes last season, completing 48.6% for 249 yards, and one touchdown. Dayne Crist has transferred to Kansas, but other quarterbacks are in the mix for the starting role, including Everett Golson, Tommy Rees, and freshman Gunner Kiel. Rees was the starter for most of last season, throwing for 2871 yards, 20 touchdowns, but 14 interceptions. There were only three games last year that Rees did not throw an interception. Running back Cierre Wood is back (1102 rushing yards, 5.1/carry, and 9 rushing touchdowns), but the Irish lose the athletic Jonas Gray (791 rushing yards, 6.9/carry, and 12 rushing touchdowns) to the NFL’s Miami Dolphins. George Atkinson III saw time at running back in the spring game and could see time this fall. With the loss of Gray, expect the rushing numbers for this unit to drop. Lineman Braxton Cave (Center, missed 2011 season, but 13 starts in 2010), Chris Watt (Left Guard, 13 starts in 2011), and Zack Martin (Left Tackle, 13 starts in 2011) all return this year. RG Mike Golic and RT Christian Lombard fill out the rest of the line. One of the biggest loses for the Irish is the talented Michael Floyd, who was drafted by the NFL’s Arizona Cardinals. In each of his last two seasons, Floyd topped 100 yards receiving, 1147 in 2011. He had nine touchdowns catches last year. Starters Robby Toma (207 yards receiving and one touchdown catch) and TJ Jones return (366 receiving yards and three touchdown catches). Expect DaVaris Daniels to fill the spot vacated by Floyd. TE Tyler Eifert does return (803 yards receiving and five touchdown catches). The lack of a deep threat could be an issue for the Irish. Notre Dame faces rivals Navy (at Dublin, Ireland), Purdue (at home), Michigan State (at East Lansing, Michigan), Michigan (at home), Stanford (at home), Pittsburgh (at home), Boston College (at Chestnut Hill, Massachusetts), and USC (at Los Angeles, California). They will also face Miami (at Soldier Field, Chicago, Illinois), Brigham Young (at home), Oklahoma (at Norman, Oklahoma), and Wake Forest (at home). When the Golden Nugget Las Vegas released opening lines on June 11, 2012, they released lines for 10 of Notre Dame’s 12 games, leaving out Purdue and Wake Forest. Notre Dame is favored in 7 of those games (smallest margin is by 1 against Michigan and largest is by 13.5 against Navy); they are a three point underdog at Michigan State and a 13 point underdog against USC. Expect the Irish to be favorites against both Purdue and Wake Forest. Under Kelly, Notre Dame is 12-12-2 against the spread (8-9-2 as a favorite and 4-3 as an underdog). In 2010 and 2011, the Irish lost to at least one opponent in which they were more than a touchdown favorite (Tulsa in 2010 and South Florida in 2011). Its’ a make or break year for Kelly. 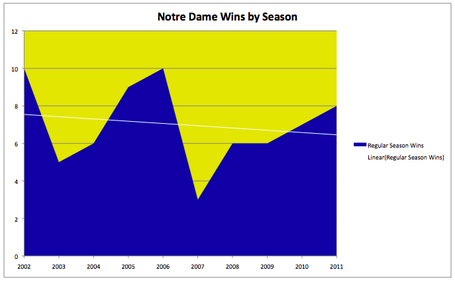 What are your thoughts on Notre Dame football? Tweet to us @BVTSB.