Share All sharing options for: Monday Recruiting Roundup Peers Into the Future

Oh the possibilities. Possibilities are what make recruiting so ridiculous and yet so entertaining, and Michigan has been fortunate to recruit well enough to let Wolverine fans dream a bit. If Hoke and company can find a way to land Laquon Treadwell and Derrick Green opposing fans' levels of frustration might reach all-time highs, and that's fine by us. After Michigan picked up a four-star cornerback they were visited by Green at the Big House BBQ, all while Treadwell did work in Florida, but we'll get to all of that after the jump.

On a general note make sure to keep in mind the fact that Michigan now has two spots open, meaning they'll most likely end up with a class of 25 players. This is due to the loss of CB Terrence Talbott.

Let's get the bad yet expected news out of the way first to ensure a positive ending.

Michigan has halted its recruitment of S/CB Leon McQuay. They apparently gave him the hard sell and he didn't bite, but if he had it would have been a surprise. He'll stay in the south.

The traditional BBQ in the country's largest stadium continued this weekend, and although it wasn't an explosion of commitments and newly named leaders it would be a crime to call it anything but a success.

The name that everyone wanted to hear about was Derrick Green. Ohio State stopped recruiting him and I won't get into arguing about why or how that came about, but it didn't hurt Michigan's chances. His trip to the BBQ was a great one, doing everything from being held up by two of Michigan's OL commitments to hoisting the Heisman Trophy: 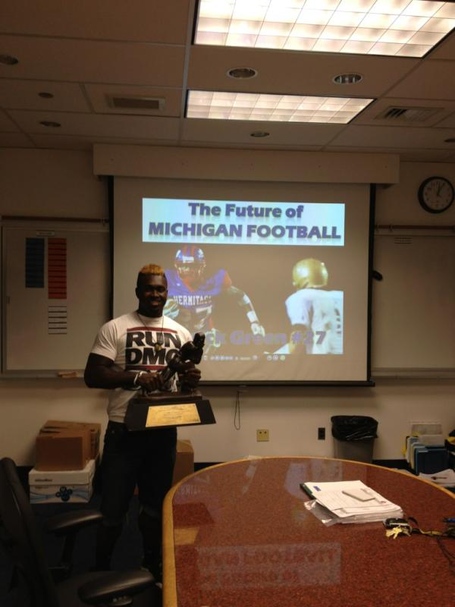 When Brady Hoke calls you the future of Michigan football and lets you hold the most coveted trophy in sports it tends to leave a mark. He tweeted early and often while on the visit:

He didn't commit despite a flurry of rumors that he would pull the trigger but I wouldn't be surprised if Michigan now leads. With two spots open and the Wolverines still recruiting a handful of players he knows that the clock is ticking, so don't be stunned if he give his verbal commitment.

We're already familiar with 2014 LB Michael Ferns, who had a great weekend in Ann Arbor. There's a good chance that he ends up being Michigan's first 2014 verbal commitment.

Class of 2014 teammates WR Artavis Scott and OL Mason Cole also made it to Ann Arbor and were thoroughly impressed. Scott got his hands on the Heisman Trophy while Cole named Michigan his leader. The Floridians are two big names to keep an eye on in the upcoming recruiting cycle.

Make sure to check out TTB's full list of BHBBQ visitors, which includes 2014 WIsconsin DE Conor Sheehy. He received his offer at the BBQ.

And finally there's this picture:

Both Shane Morris and Laquon Treadwell performed in Florida over the weekend, preventing them from traveling to Ann Arbor for the Big House BBQ. Reports had Morris finding Treadwell quite a few times despite Morris struggling early. Shane would go on to redeem himself on day two with a solid performance.

Treadwell was offered by LSU this week yet still maintains Michigan as his top school. Wolverine fans won't like to hear it but the further his recruitment is dragged out the worse off Michigan is. I still expect him to be blue but Jordan Diamond took us all on a similar ride last year so don't go thinking Treadwell is guaranteed to end up in the maize and blue.

Michigan added 2013 OH CB Ross Douglas. He's a smaller corner but rated as a high three-star to low four-star depending on where you look. Read DG's New Blue piece on him for a complete rundown. My two cents:

I see a corner capable of being a solid nickel corner, and possibly even a starter if need be. At 5'10", 180 he's built like a corner who would be useful in the slot. Physicality and tackling ability are there despite being on the smaller end, and I like his footwork in both press and off techniques. His awareness and football IQ are strengths.

Most of his position-specific traits are of the good, not great type. His agility is decent but he lacks that cliche extra gear needed to cover ground quickly. I'd expect his 40 time to be in the high 4.4 to low 4.5 range. His ball skills are solid, often pinning the receiver to his hip before turning his head to locate and make a play on the ball.

Overall he's the typical high 3-star to low 4-star cornerback. His offer sheet reflects the ability of a corner capable of starting, and he'll get an opportunity to battle for a spot. At best Michigan got itself a solid starting corner, at worst it added depth at the nickel spot behind an already talented crop of cover men.

His name hasn't been tossed around much, if at all, but PA WR Robert Foster claims a top five of Alabama, Oregon, Michigan, Michigan State and USC. I doubt the Wolverines are an actual player here but bigger miracles have happened before.