Each Wednesday, up through August, I’ll cover a different Big Ten team or Michigan non-conference opponent. This week, I’m covering the Penn State Nittany Lions, who Michigan does not play this season. Still, Penn State will play Legends Division opponents Northwestern, Iowa, and Nebraska, which will help to determine where Michigan will end up in the divisional standings.

Notes: For the first time in 47 years, someone other than Joe Paterno will be patrolling the sidelines at Penn State. Coach Paterno made his debut as Penn State football coach in 1966, following another legend, Rip Engle. Paterno had to make adjustments over the years, including from a pro style offense to a more open, spread, offense. That change likely saved his job after clamors for him to retire in 2003 and 2004. Despite a combined 7-16 record in those seasons, Penn State was 11-1 in 2005, with the lone blemish to Michigan, a 27-25 thriller in Ann Arbor. Long time coordinators Galen Hall (since 2004) and Tom Bradley (since 2000) depart State College. Bill O’Brien will call the plays offensively, replacing Hall, while long time assistant, and former Duke head coach, Ted Roof will replace Bradley.

BVTSB Take: Expect a somber open to the season on September 1st, when Penn State faces Ohio University. The Nittany Lions also face Virginia, Navy, and Temple in non-conference. While Penn State has been dominant over the years, they have the potential to lose each non-conference game, but 3-1 is realistic. Penn State will need to sort out their quarterback situation, which has long been a problem. Matt McGloin, Paul Jones, and Rob Bolden all saw playing time in the spring game, with each throwing at least one interception. McGloin and Bolden combined for over 2100 yards passing last year, but only 10 passing touchdowns and 12 interceptions. Only 42.1% of offensive plays run last season were passes – expect that number to grow over the seasons that O’Brien runs the offense. O’Brien, former offensive coordinator of the NFL’s New England Patriots, was famous for integrating the use of the tight end in the passing game – expect similar results in State College. Expect Kevin Haplea and Garry Gilliam to start at tight end; Haplea had three catches for 21 yards and a touchdown last year, while Gilliam missed the season with an ACL tear. Wide receivers Devon Smith and Justin Brown return for their senior seasons – they combined for over 900 yards receiving and four touchdown catches. Replacing Derek Moye will be tough (he’s now a member of the NFL’s New Orleans Saints), as he had 654 yards receiving and three touchdown catches, accounting for 22% of Penn State’s catches. If Penn State makes a bowl game this season, it will be due to the return of running back Silas Redd, who rushed for 1241 yards last year, averaging 5.1 yards per carry, and seven touchdowns. Stephfon Green departs for the NFL’s Detroit Lions – he saw one-quarter of the carries Redd did, rushing for 266 yards, but six rushing touchdowns. Expect Curtis Dukes to back up Redd and see playing time. Since 2009, Penn State is 1-9 against ranked opponents. That’s a pretty chilling stat, considering as many as four of Penn State’s opponents could be ranked at the time they meet. Penn State’s road games could be tough – Illinois, Iowa, Purdue, and Nebraska. The home games aren’t much easier – Northwestern, Ohio State, Indiana, and Wisconsin. Expect a rebuilding year for Penn State; the transition to a pro-style offense will be tough. 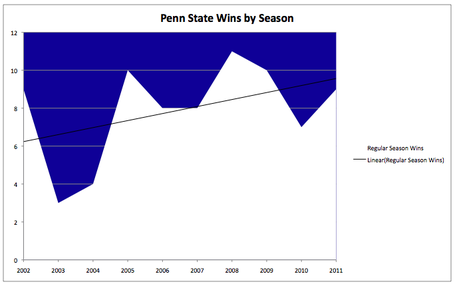 What are your thoughts on Penn State football? Tweet to us @BVTSB.