The Top Midwest Players for the 2014 Class

Share All sharing options for: The Top Midwest Players for the 2014 Class

By now, we all know the 2013 recruiting class is coming to a close. There's between 2-3 spots left and a few weeks ago I gave my prediction of how the class will finish. I'm sticking to it even though I know it's a long-shot! Although it's only July, it's time to start looking at the 2014 class. There's been over 50 offers given out already and things are starting to heat up. Unfortunately, only one recruiting site has rankings for 2014 players and that's 247 Sports. 247 only ranks the top-100 players in the country, and yes, it's very early to be ranking the top-100 in the nation, but as long as we all understand that these rankings will definitely be changing, we can start to discuss them. Out of those 100 players, there are 12 from the Midwest. I'm going to be breaking down these 12 players and also discussing their interesting in Michigan, Michigan's interest in them, and what our chances are. Yes, it's early. But is it ever really too early to discuss recruiting? I didn't think so. Here is the breakdown by players in the top-100 by state: 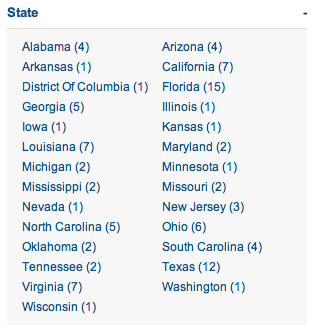 As we can see, there are only 12 top-100 prospects from the Midwest (Michigan, Ohio, Indiana, Illinois, Wisconsin, Minnesota, and Iowa). Pretty crazy considering there are 12 alone from Texas and 15 from Florida. Bias much? Anyway, we all need to become familiar with these names...

McDowell is an absolute beast. He is a defensive end out of Loyola in Detroit, MI. He stands 6'7" and 296 pounds. 247 currently has him as the 23rd best player in the 2014 class, the 2nd best DE, and the best player out of the state of Michigan. He holds offers from Michigan, Michigan State, Ohio State, Notre Dame, Oregon, and Stanford, to name a few. As a sophomore, McDowell had 67 tackles, 12.5 sacks, and 3 fumble recoveries. Many people believe McDowell may end up the top prospect out of the Midwest for the class of 2014 -- that's how good he is. Luckily for Wolverine Nation, McDowell grew up a Michigan fan. He claims, however, to have no favorites and sounds like he wants to play out the process. But if he doesn't end up at Michigan, then the coaching staff will have really screwed this one up. Chances are high McDowell goes Blue.

We're all pretty familiar with this young man because he recently made his decision and is currently a Michigan State commit. Harris is a two-sport athlete and has always said he's wanted to play two sports in college. He is an excellent athlete and Michigan really missed out on this one, but Harris has always said he grew up a Michigan State fan. Wolverine fans thought they had a legitimate shot since Harris's father has said he had wanted his son at Michigan, but Drake chose Michigan State last week. I really wouldn't count this as a Dantonio win against Hoke, as much as an Izzo win. In my humble opinion, I can't imagine Harris pulling off playing both sports in college. I feel as though he'll have to choose, and once he does, I would bet he chooses basketball. If that's the case, I can't blame him for choosing Michigan State.

Booker is a linebacker from St. Vincent-St. Mary in Akron, OH (sound familiar?) who stands 6'3" and 210 pounds. 247 ranks him the top linebacker in the nation for his class, the 19th best overall player in the nation, and the top player out of Ohio. Impressive stuff, right there. He holds offers from Michigan, Ohio State, Indiana, Nebraska, Penn State, and Illinois. As a sophomore, Booker had 157 tackles, 14 sacks, 8 pass breakups, 4 forced fumbles, 3 fumble recoveries, and a defensive touchdown. Interestingly enough, Booker's father played at Auburn University, so I wouldn't be surprised if they became a major player once they offer. He has told 247 that Michigan and Ohio State are "neck and neck," but if I had to guess (an early, early guess), he's OSU-bound.

James is another linebacker who comes from Springfield, OH. He stands 6'3" and 220 pounds. 247 ranks him the 73rd best player in the country, the 4th best linebacker, and the 2nd best player out of Ohio. I am very surprised to say that he currently has no offers. I'm sure that will change very soon. His early interest is clearly in Ohio State, but once he starts getting some offers, I'm sure he'll want to expand his horizons and look at his options closely. As a sophomore, James had 52 tackles and 1 interception. Of note, James is a teammate of 2014 WR Thaddeus Snodgrass.

Kief is a wide receiver out of Cincinnati, OH who stands 6'5" and 185 pounds. 247 ranks Kief the 85th best player in the nation, the 12th best wide receiver, and the 3rd best player out of Ohio. Kief currently only holds offers from Cincinnati, Toledo, and Illinois, but that will surely change soon enough. As a sophomore, Kief had 44 receptions for 612 yards and 7 touchdowns. He has said that he would love an offer from Michigan and that he definitely plans on visiting, but he has also said that he's grown up an Ohio State fan. Realistically, I think Ohio State is probably the team to beat in this situation, but I do think if Michigan is interested, he will give them a legitimate look.

Last week I wrote about Kizer when I was breaking down Michigan's options at quarterback for the 2014 class. Read all about him here.

Finally! An Ohio player who is not an Ohio State fan. Ferns is my favorite Ohio prospect of the 2014 class. Bias much? But seriously, Ferns is a great linebacker out of St. Clairesville, OH. 247 ranks him 94th best player in the nation, the 5th best linebacker, and the 5th best player out of Ohio. He stands 6'3" and 238 pounds. He had 136 tackles as a sophomore. I'll just cut to the chase. Ferns has a ton of offers, has visited quite a few schools, and has already come up with 3 finalists. That's right, finalists. He specifically said he doesn't want this list to be called his "top-3" because these are most definitely his finalists. They are Michigan, Penn State, and Notre Dame. So, remember when I said he had a lot of offers? Twenty-two to be exact, including his 3 finalists, Michigan State, Ohio State, Oklahoma, Stanford, and Wisconsin. Check out my interview with Herns here.

Watkins is an athlete out of Galion, OH. He stands 6'2" and 184 pounds and plays wide receiver and quarterback (dual-threat). 247 ranks Watkins the 96th overall player in the 2014 class, the 8th best athlete, and the 6th best player out of Ohio. Watkins currently only has a few MAC offers and an offer from Illinois. As a sophomore, Watkins threw for 1254 yards and 16 touchdowns. He also rushed for 559 yards and 10 touchdowns. Watkins is clearly talented and his recruitment will only continue to grow. He has told Tremendous that he's grown up a Buckeye fan, but he's friends with Michigan's Courtney Avery and plans on coming to visit Michigan and will give them a legitimate look. I personally think Watkins's recruitment is probably wide open and he would be a great get. Michigan has a chance if they offer early.

It seems as though there are a lot of excellent linebackers coming out of the Midwest in the 2014 class. Garrett is an absolute beast though and already holds 5 B1G offers including Ohio State and also holds an offer from Notre Dame. He does not yet have a Michigan offer, which I found interesting since he has visited Michigan already. Garrett comes from Plainfield, IL and stands 6'2" and 215 pounds. I believe Garrett is a huge OSU lean. He camped at OSU and called it his "best camp by far." 247 ranks Garrett the 41st best player in the nation, the 2nd best linebacker, and the top player out of Illinois. As a sophomore, he racked up 78.5 tackles, 3 sacks, and 3 forced fumbles. I think Garrett will be a hard get, and I would bet he ends up at Buckeye.

Jones is a running back out of Minneapolis, MN. He stands 6'0" and 195 pounds, which is a great size for a running back. 247 ranks Jones 84th overall in the nation for the 2014 class, the 7th best running back, and the top player out of Minnesota. Jones holds offers from Minnesota, Illinois, Iowa, Iowa State, Michigan State, and Wisconsin. I believe his recruitment will continue to blow up and he eventually earns a Michigan offer. As a sophomore, Jones rushed for 1310 yards and 18 rushing touchdowns. He also had 10 receiving touchdowns. Jones also played linebacker and he racked up 38 tackles, 5 pass breakups, and 1 fumble recovery. Jones is currently very high on the Badgers but anything can happen when he receives more offers. This is a wait-and-see situation.

Lazard is an athlete out of Urbandale, IA who plays both wide receiver and safety. Lazard stands 6'4" and 195 pounds. 247 ranks him 87th overall in the 2014 class, the 7th best athlete, and the top player out of Iowa. He currently holds offers from Iowa, Iowa State, and Nebraska. Lazard has attended camps all over the country and is hearing from many schools. As a sophomore, Lazard racked up 356 yards receiving yards and 2 touchdowns. At safety, he had 94 tackles with 8 interceptions. There's not a lot of information out on Lazard yet so it's hard to say which way he's leaning, if at all. I think when more offers come, he'll have a lot more to think about.

Evans is a 4-star defensive tackle out of Sun Prairie, WI. He stands 6'3" and 305 pounds and 4 offers from Michigan State, Nebraska, Pittsburgh, and Wisconsin. 247 ranks Evans 51st overall in the 2014 class, the 6th best DT, and the top player out of Wisconsin. As a sophomore, Evans racked up 75 tackles, 14 tackles for a loss, 13 sacks, and 5 forced fumbles. It is believed that Wisconsin is the heavy favorite for Evans and he said he will "probably" commit there. Of course anything can happen if and when Evans receivers more offers, especially since he's originally from the South. If he starts garnering attention from some top Southern schools, I believe his recruitment could be wide open. As of now though, Evans is a huge Wisconsin lean.

So there you guys have it. Those are the top 2014 players from the Midwest. Since the Midwest seems to have a lot of talent in this class, hopefully Michigan can land a couple big ones.