Today, we arrive at our final Maize n Brew Big Ten Preview, covering our Michigan Wolverines. 111 point spreads for games were released by the Golden Nugget in early June. 5 of Michigan’s games appeared on there, with three of them resulting in the Wolverines being favored (Michigan State, Nebraska, and Ohio State), but underdogs in two (Alabama and Notre Dame). Expect Michigan to be favored against Air Force, Massachusetts, Purdue, Illinois, Minnesota, Northwestern, and Iowa. The Wolverines should be double-digit favorites against the Falcons, Minutemen, Boilermakers, Fighting Illini, Golden Gophers, and Wildcats. Still, being double-digit favorites can mean overconfidence – since 2007, when Michigan has been a double-digit favorites, they are 17-1 straight up (9-9 against the spread), including 5-0 (4-1 against the spread) under Coach Hoke.

Notes: Many Michigan fans were happy to see Rich Rodriguez go at the end of the 2010 season. Arguably, Rodriguez was never given the chance, as many were opposed to the hire in the first place. When Brady Hoke was hired following the Gator Bowl, many were not pleased, hoping Les Miles would have been the choice. Still, many former Michigan players and alums rallied behind Hoke – with good reason. Phrases like "This is Michigan fergodsakes" and calling Ohio State "Ohio" became rallying points for the fan base. Hoke turned a 7-6 Michigan team into a 11-2 team, ending the season as Sugar Bowl Champions. The 11-2 record was Michigan’s best record since 2006. All in all, 2011 was a successful first year for Coach Hoke, as he saw the team’s defense improve dramatically, giving up an average of 17.4 points per game, down from 35.2 in 2010. The offense did well too, averaging 33.3 points per game in 2011, compared with 32.8 in 2010. Still, Hoke followed his predecessors and lost to rival Michigan State in his first year.

BVTSB Take: The schedule in 2011 was very manageable, facing non-conference foes Western Michigan, Notre Dame, Eastern Michigan, and San Diego State all at home (only an underdog in the Notre Dame game). Games against Minnesota, Purdue, Nebraska, and Ohio State at home also helped. Really, the troublesome games in 2011 were mostly at home (Notre Dame, Nebraska, Ohio State at home, Michigan State and Iowa on the road). This year, it’s a bit different. Michigan returns 2010 All-American Denard Robinson at quarterback, for his final season. Robinson threw for 2173 yards and 20 touchdowns last season, rushing for 1176 yards and 16 touchdowns. Still, his turnovers tend to be an issue, as he threw 15 interceptions last year, up from 11 in 2010. His second year under offensive coordinator Al Borges should help to limit the turnovers. Running back Fitzgerald Toussaint should also return, although recent off the field problems have left him suspended indefinitely. Toussaint rushed for 1041 yards and nine touchdowns last season. Expect Vincent Smith and Thomas Rawls to see time, regardless. The two combined for 377 rushing yards and two touchdowns last year in limited time. Michigan does experience a pair of key losses on the offensive line though, losing C David Molk to graduation (now a member of the NFL’s San Diego Chargers) and RT Mark Huyge. Starters RG Patrick Omameh (13 starts in 2011), RT Michael Schofield (10 starts at LG in 2011), and LT Taylor Lewan (13 starts in 2011) all return. C Ricky Barnum and LG Kyle Kalis are also projected to start. Kalis is a highly regarded freshman, while Barnum saw limited time at center during the Sugar Bowl last year. The wide receiving corps for Michigan is a bit inexperienced, but could improve their numbers with Borges’ help. Leading receiver Junior Hemingway (699 receiving yards and four touchdowns) and TE Kevin Koger (244 receiving yards and four touchdowns) depart. Michigan also loses WR Darryl Stonum, although he was suspended in 2010 – he has transferred to Baylor. Expect Roy Roundtree (355 receiving yards and two touchdowns), Jerald Robinson, and Jeremy Gallon (453 receiving yards and three touchdowns) to all start. TE Brandon Moore will take over for Koger. Michigan opens with Alabama (at Arlington, Texas), Air Force, Massachusetts, and at Notre Dame. The brutal non-conference schedule could result in Michigan being 2-2 heading into their bye week. Michigan faces Purdue, Nebraska, Minnesota, and Ohio State on the road. Nebraska and Ohio State will be tough, but Purdue and Minnesota should be manageable. Home games against Illinois, Michigan State, Northwestern, and Iowa should allow Michigan to run their Big Ten home unbeaten streak to eight straight. The Spartans present the toughest home test, but without record setting quarterback Kirk Cousins, the Wolverines could have the upperhand. Many are predicting a step back in 2012 for the Wolverines, which is entirely possible. The 2012 team should be better than the 2011 team, but the record may not reflect that. Losses to Alabama, Notre Dame, Nebraska, and Ohio State are entirely possible, but this team could still make the Big Ten Title, based on Nebraska and Michigan State both facing the Buckeyes and Wisconsin. 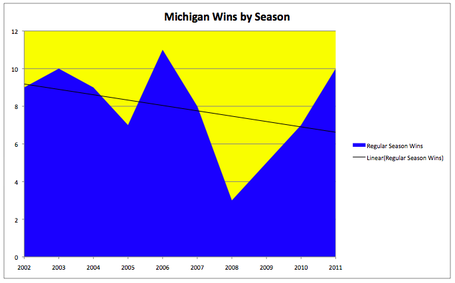 What are your thoughts on Michigan football? Tweet to us @BVTSB.