Getting to Know Ross Douglas

Share All sharing options for: Getting to Know Ross Douglas

From Avon, Ohio to Ann arbor, Michigan to be a wolverine...#wow #blessed

Most of us who follow recruiting are pretty familiar with most of the commits for the 2013 class, but what about Ross Douglas? Douglas decommitted from Penn State a few weeks back and then immediately committed to Michigan on July 24th. Instead of him getting lost in the shuffle, I wanted to give you all a proper introduction to Ross Douglas.

Douglas is an excellent cornerback out of Avon, Ohio. He stands 5'10" and 180 pounds and he is Michigan's 9th commit from the state of Ohio for the 2013 class. He was actually one of the first recruits I wrote awhile back because he has always admittedly had high interest in Michigan. His sophomore year, Douglas had 175 carries for 1,019 yards and 15 touchdowns and also 10 catches for 150 yards and one touchdown on offense. On defense, he tallied 40 tackles, 13 pass break-ups, and one interception. He is a two-way player for his high school team and clearly very athletic, which I assume is a huge part of the reason Hoke and Co. love him. Now, let's talk rankings...

Douglas seems to be ranked highest on Rivals, which also happens to be the rankings I trust the most. Rivals is planning on releasing a new set of updated rankings next week, so those will be interesting to see.

Douglas holds multiple offers, and would probably have kept receiving more interest if it wasn't for his early commitment to Penn State. He has 20 offers including offers from almost all of the Big Ten. Before attending the Big House BBQ last month, Douglas's only visit to Michigan was during last year's Under the Lights game against Notre Dame. Even though he committed to Penn State, he was always high on Michigan, which shows just how important of a recruiting tool that night game was. In fact, Douglass committed to Michigan only one day after decomitting from Penn State. Considering he had multiple visits planned as soon as he decommitted from Penn State, such as trips to Notre Dame and other Big Ten schools, it's impressive that he chose Michigan even before the Big House BBQ.

National 247 Sports analyst Barton Simmons said, "He's not a guy that jumps out from the standpoint of measurables off the bat, but Ross Douglas immediately jumps out once you go to work. I've seen him in probably three different camp settings this spring and summer, and he's always one of the guys that sounds out during footwork drills, agility work, and DB work. He's one of the more polished and smooth cornerbacks in this class."

Simmons's quote goes to show, yet again, the Michigan coaching staff's eye for talent. Even though Douglas has 20 offers, he is probably still underrated because I've always read good things about him at the camps he's attended. He is one of those corners who isn't at the ideal height, but plays taller than he is, similar to Michigan corner Blake Countess. Even though he's not tall, his speed seems to be his best attribute. His high school coach at Avon says of him, "His number one attribute is his tremendous speed. He's one of the fastest players I've ever coached. He's been blessed with this athleticism." 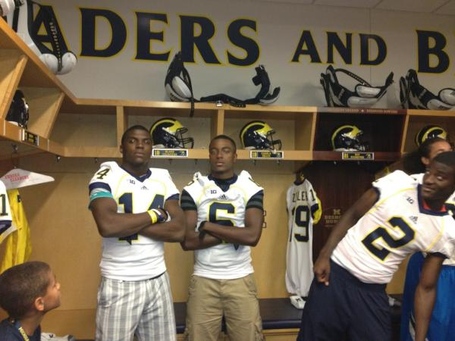 Douglas's commitment makes him the 4th defensive back commit of the 2013 class, joining safety Dymonte Thomas and corners Gareon Conley and Jourdan Lewis. This makes the 2013 DB haul incredibly impressive. Look at it this way, 247 Sports's Todd Worley was asked how he would rate this DB haul compared to Blake Countess, and he ranked them as follows after watching some tape: Lewis, Conley, Countess, and Ross, with Conley being right behind Lewis and Ross being right behind Countess. Considering how quickly Countess has matured and what's expected of him this upcoming season, there is no reason Michigan fans shouldn't be ecstatic about this 2013 DB haul.

My arrival date at Michigan is January 7th

It looks like Douglas will be an early enrollee. This is great news considering Mattison will have that much more time to work with him. Overall, I'm very excited about Douglas and the rest of the 2013 DB commits. Defensive back has been a real position of need over the last couple years and it's a part of the defense that Michigan really needs to work on. However, with this haul, the future definitely looks bright. Get excited.