Twas the Day Before Football: 2012

Share All sharing options for: Twas the Day Before Football: 2012

Twas the Day the Before Football, and all through the land,
No one was working, productivity was canned.
The tailgates were planned, the bar meetings set,
Old buddies joked about how drunk they would get.

Thursday is was, and Kick-off is near.
You know where you'll be with an icy cold beer.
For now it is fall and there's football to see,
Abandon your family, buy a bigger TV.

On flips the tube and there's Musberger's face!
"What a season we've got! It'll be quite a race!"
You thought I was gone? Well I've got something for you,
Two more years bitches, I'm still salty and new.

"Now Texas! now, Georgia! now, Michigan and Clemson!
On, Oregon! On, Utah! On California and Wisconsin!
SC's Number 1, it's them you must beat!
This season will keep you on the edge of your seat!"

Christ what a summer, how dumb can people be?
Scandals galore, dirty laundry to see.
So much has happened, what can we say?
Let's break it all down on this Pre-Football Day.

Ole' Bobby crashed out while riding his Hog,
Prob'ly cause his passenger was grabbing his knob.
He lied and lied till red in the face
Then they fired his ass, with his neck in a brace. 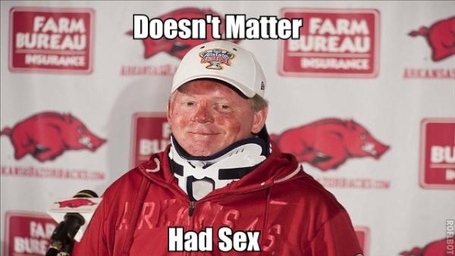 Don't get us started on what went down at Da U,

Aquatics 101 is crashing a Ski-Doo.
Al Golden had screamed "We're Back!" particularly loud,
While his players did things to make Caligula proud. 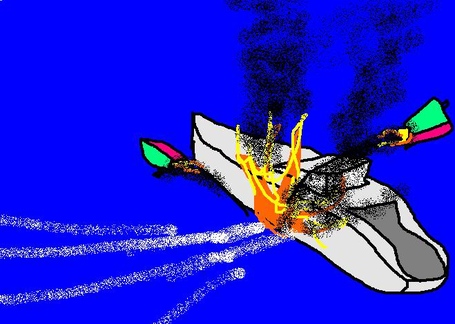 As for Penn State, we're steering clear of what's said,

But it didn't stop Kiffin from poaching Silas Redd.
O'Brien's got work to do, and nothing's for sure,
Just ignore those knocks, it's Illinois at the door.

TCU got some press, but for nefarious deeds,
As it's players were dealing in shit tons of weed.
Suspensions galore for the Frogs and the Hogs
As Arkansas' players found folks they could rob.

But enough of misdeeds, lets talk about teams,
Who went where and who has BCS dreams.
Does the Big East exist, how well will it fare?
I don't know who is left, and I really don't care.

The Big XII was a shambles for everyone to see
As A&M and Mizzou joined the ole' SEC
The Aggies ran out, their victory yell sounding,
But with that schedule ahead, they're in for a pounding.

Mike Leach is back! The Pirate sails high!
For his first season in Pullman we'll give him a bye.
It's going to be tough in a loaded Pac-12
But Wash U is back... after 2012.

The Big Ten's a question, what with bowl bans galore.
For Wisconsin it means an open Rose door.
But MSU and Michigan, that Rose bid they seek,
We'll see what they've got, later this week.

The pre-season polls have all been released,
As usual Duke's chances have been pre-deceased.
The Trojans were picked for a Championship date,
but the SEC's planning to make it eight straight.

All the off season nonsense finally comes to a close.
No more stories about change and hair in corn rows.
Recruiting goes cold if, for only a while,
Because there's football to play and that business is vile.

The Big East wants respect, the Big Ten validation,
The SEC another crown, and the Pac 12 attention.
The Big XII wants to prove it's more than two teams,
And every team out there has BCS dreams.

Now everyone's tied, nothin and nothin.
Every team's got some hope that this year will be somethin.
Vandy and South Carolina line up for a row,
For tonight in Nashville, the season's a go.

Today rest well, your stamina you will need,
Your hunger for College Football, tonight it will feed.
As I look at the tube, I see Brent in my sight,
"College Football for all, and for all a good-night!"