(A special thanks to MGoVideo for everything he does week in and week out. This wouldn't be possible without him).

Air Force tried to convert on fourth down five times in the second half of Saturday's game. Two of the conversions were successful and helped lead to Air Force touchdowns. The other three were stopped and were arguably the three most important stops the defense made all day. Let's look at each.

Air Force didn't find itself behind the chains very often in the first half of the game, but following Denard Robinson's second long rushing touchdown to start the third, the Falcons had moved the ball slowly down the field, all the way to Michigan's 1-yard line. Michigan still had no answer for the triple option attack as the drive had already covered 88 yards in 13 plays. However, in the shadow of their own goal posts, Michigan's defensive players had a chance to come up with a stop.

The Falcons line up on the right hash with two backs in the backfield in an offset formation (fullback behind the center, halfback offset behind him to the boundary side), one wingback to the field side, and one receiver split to the field side. 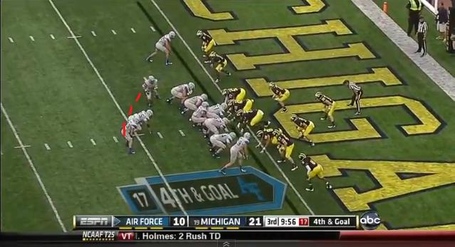 Pre-snap the wingback comes in motion to the boundry side (also where the tight end is lined up), and on the snap of the ball the fullback comes across on dive action. With a quick QB turn to that side it looks like the ball is going to come to the boundry side on a triple option, but there is one player moving away from all of that: the halfback. 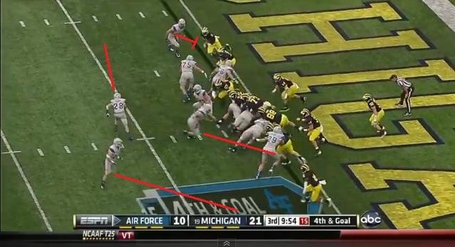 Now if you are looking at the above picture and screaming, "NO COURTNEY AVERY, WHAT ARE YOU DOING!" then congratulations. You are probably slowly working on an ulcer courtesy of Michigan football. What Avery does here is get suckered in by the action to the other side, and then allows himself to get sealed to the inside. If the block happens almost directly on the PAT hash, that leaves the entire left half of the field wide open. That means touchdown.

Michigan had problems on the edge all day, and this is just another example. Because the option is so gruelingly effective, it gets defenders lulled into a false sense of security where they focus on just the option action in the backfield. That opens up the field for constraint plays such as the backside pitch above. And again, Michigan has a game on its hands.

Following Michigan's second touchdown of the half, Air Force again moved the ball down the field 60 yards in 11 plays to set up a 4th and 3 on Michigan's three yard line. The Falcons run out the field goal unit, but instead go for the run fake to the left. Michigan is all over it. 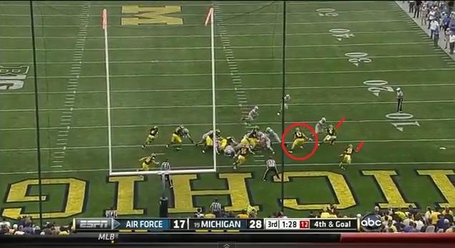 The Falcons are looking for the option play to the kicker as most of the line blocks down and the wingback gets a block on the contain man. Fortunately, Cam Gordon is in perfect position to keep this play to the inside of the field, Thomas Gordon is there for support, and Jake Ryan is standing right in the hole. 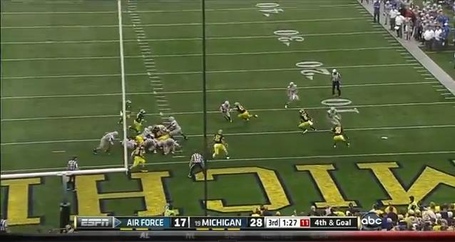 With the Gordons on the outside to cover the pitch, the holder turns it upfield in hopes of beating Jake Ryan. While he does elude the tackle, Ryan attacks the runner's outside shoulder forcing him to cut back in to a waiting Joe Bolden for the tackle short of the goal line.

After Michigan came up with a big third-down stop on the first play of the fourth quarter, Air Force lined right back up to try for a first down. On the snap it is crystal clear what is coming: triple option to the field side. 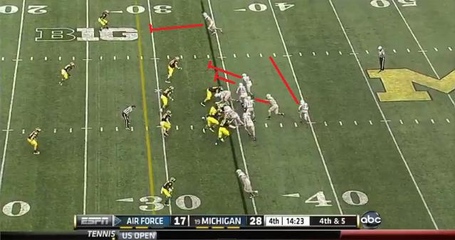 The wingback to the playside is joined by the playside guard on the outside as the guard pulls around the RT, who has successfully chopped Roh to the ground. Michigan already looks to be in a bad position. Jake Ryan and Joe Bolden are both going to be eating blocks, JT Floyd is going to have to come from eight yards deep up to the LOS to try and squeeze this play down, and both Thomas Gordon and Desmond Morgan are going to have to flow hard to the field flat to try and make a play. Even if all of that happens, this one will still be close to a first down for no other reason than the numbers advantage that Air Force has just a split second into the play. 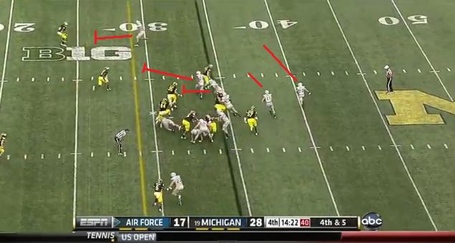 A split second later the play is on Jake Ryan's shoulders. The wingback and the guard have both moved past Ryan to block Gordon and Bolden respectively, and Floyd is still sitting flat footed eight yards off the line waiting for the block to come to him. Morgan has been chopped on the backside of the play and is at least out of range to tackle before the first down is gained. 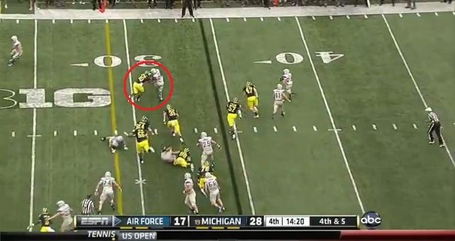 Ryan forces the pitch, but with Floyd still waiting for the ball eight yards off the first down -- you can't even see him in frame -- there is little hope. Thomas Gordon filled nicely, but took on a block. If Floyd attacks the line and closes this off*, Gordon might have a chance to come off his block and make a play a few yards back, but in the open field its basically a race between Getz and Jake Ryan. I have my money on Getz. Gordon still gets off his block and nearly makes the play before the first down, but Getz gets enough to move the chains.

After this play Air Force continued down to the endzone for a touchdown to make it a three point game.

*(I'll wait for some blogger corroboration, but my reading of this play is that the corner needs to play the run better here. While Gordon's responsibility looks to be the pitch man, the defense still needs better run support from the outside.)

Air Force continued to hang around in the game and with just over five minutes left the Falcons crossed into Michigan territory before getting stuffed on a third down attempt. With a split end to the boundary side of the field and a wingback on the end of the line, Air Force looks to run the Belly Option to the shortside -- the backside of Michigan's 4-3 under -- and right away it looks like the Falcons are in good shape. 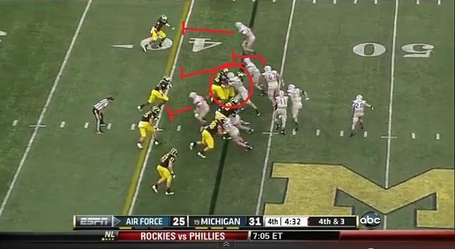 The split end is one on one with the corner while the center has gotten a free release to block Joe Bolden in the middle of the field. James Ross is flowing to the ball from the WLB spot, but he is about to run smack into both the wingback and the pulling playside guard. Then something marvelous happens inside that red circle. 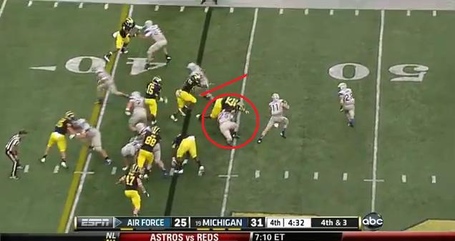 The way I read this play, the playside tackle messed up. With Black flowing so hard to the sidelines at the snap, the tackle should have had an easy block, but what looks like a line stunt that has Frank Clark cutting inside ends up freeing Black from the block and allowing him outside. Clark glances off the RT and absorbs the block from Air Force's fullback.

This leaves Black unblocked in the flat on the short side of the field, free to force the pitch. On top of that, James Ross came tearing in from the WLB spot and gets in under the pulling guard who is forced a little wide by the scrum with the RT and Michigan's D-linemen. With two defenders on the edge, there is nowhere to go and Black makes contact before the line of scrimmage. Michigan gets the ball back with just over four minutes left, and now has the opportunity to end the game on offense.

And Michigan doesn't end it on offense. The O goes three-and-out on an overturned Devin Gardner catch, and Air Force takes another shot at it. After gaining a first down and getting close to midfield, Air Force goes: incomplete, incomplete, 5-yard penalty, one-yard loss to set up a 4th and 16. 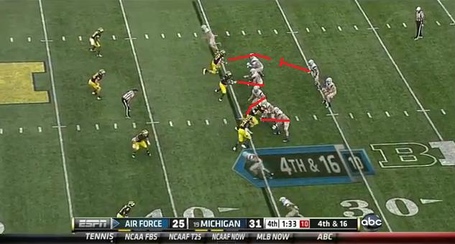 Air Force sets up in a four-wide, shotgun formation with a back to the quarterback's right. On the snap the Wolverines rush four with Frank Clark and Jake Ryan on the ends and Craig Roh and Jibreel Black inside. Ryan comes off the edge on Air Force's right while Clark stunts inside behind Roh on the left. Air Force has five linemen and a running back there to pass block and should have this dead to rights. Should... 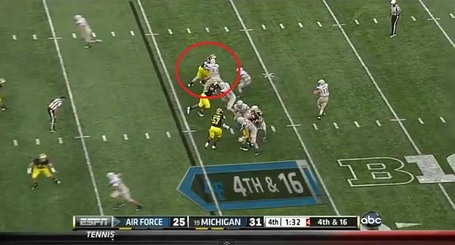 How do you know your tackle got beat? He has his shoulders turned perpendicular to the LOS while trying to block an outside rusher like so. The running back needs to make the play here, but he is set up to provide blocking support on the tackle's inside gap, so all he can do is whiff on Ryan as he breaks past the RT. You know how that ends: 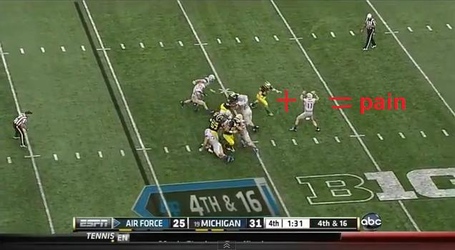 All in all the Wolverine defense faced five four-down attempts from Air Force, and four of them were manageable distance. Michigan came away with the stop on three of the plays; two of which were late in the fourth quarter with Air Force driving for a chance to take the lead.

The Michigan defense struggled for long stretches during the Air Force game, but as the game wore on, Michigan was able to adapt to the scheme and come up with some big plays. While there are reasons to worry after Air Force, the resilience of the defense shouldn't be one of them.