A game isn't won or lost on just one play. Even when the last play of the game truly ends up being "for all the marbles", you can always look back at the plays that led to the situation. Here are five plays that helped set the table for Michigan's home-opening win against Air Force.

A week after watching Robinson spend almost all of his time in the backfield as the running game with Vincent Smith and Thomas Rawls found no room to breathe, it was nice to see Robinson get carries early. Even nicer to see him break a big run. While the offensive line struggled throughout the day blocking for Fitz Toussaint, you can't really ask for a better hole than this: 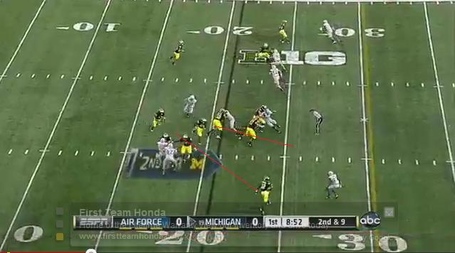 The ref has a better chance to make that tackle than most of Air Force's team.

Denard would take it 79 yards for the games first score and while it would be close the rest of the way, Michigan wouldn't ever be behind in the game. Video:

Now, part of me wants to recognize Funchess for his last catch, the over the shoulder, bobbled wheel route down the sideline that was Arrington-esque, but the second quarter drive on which Funchess caught two long passes was special for two reasons. First, it was Denard Robinson attacking down the field on vertical passing routes with success, and second, those are the kinds of plays that Junior Hemingway made famous.

The first was a simple wheel route. 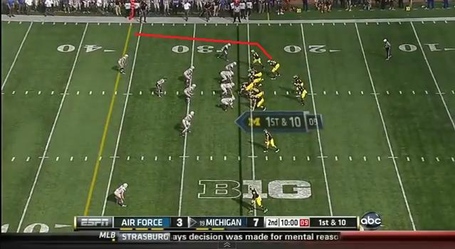 The corner is coming from the outside on a blitz, and not only does Funchess trip him up, but he gets to the sideline and behind the underneath zone run by the linebackers. 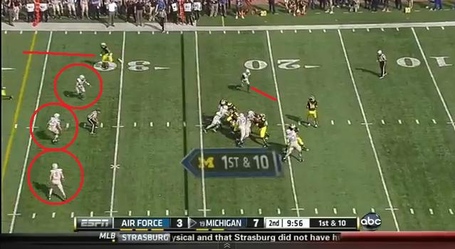 This opens up a huge bubble along the sideline 15-yards down the field because the outside receiver has run the safety off and Robinson just has to lay the ball in there in stride. He does and Funchess goes another ten yards before being knocked out of bounds.

But that's not all. A few plays later, Robinson goes back to Funchess for the touchdown.

The play is a two tight end set with Devin Gardner split wide to the left of the formation and Funchess on the line. They will be the only two to run routes as the play action pass will be max protect for the other eight players. Gardner releases and immediately widens his route to the sidelines as Funchess takes off down the seam and gives a step fake for the post route before turning outside to the flag. Once he gets behind the safety it is all over.

Funchess would haul in two passes on the drive for 59 yards, and Michigan would carry that 14-points into the locker room as a small lead over Air Force.

Denard had a great day throwing the ball against Air Force, and it would have been nearly perfect had Vincent Smith not tipped a pass to a waiting Air Force linebacker; halting a Michigan drive that could have put Michigan up three scores going in at half.

The play was a four wide set with the receivers stacked. Vincent Smith was in the backfield next to Denard Robinson in the shotgun. The playcall is four verticals, with the receivers all releasing downfield. Smith does the customary blitz pickup check then releases to the middle of the field for a short crossing route at the sticks. As he comes across the field, Robinson throws it slightly behind him, Smith knocks it up instead of down, and Air Force gets the interception. 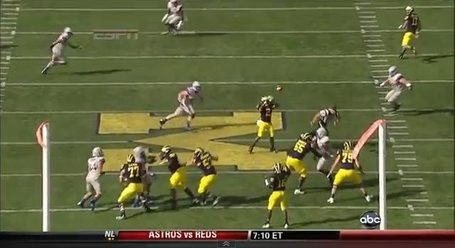 During the game I thought that this was Smith's fault, but looking it over again, Robinson didn't set his receiver up very well. If anything, the crossing route should have been lower and farther in front of Smith so that the receiver could catch it in stride and pick up yards. Instead, Robinson forced his already short running back to have to go up and behind to pull in the pass. He couldn't do it, and Air Force got a huge break on what turned out to be a 14 point swing.

Any and all momentum Michigan lost in the end of the first half after the Robinson interception was temporarily restored very early in the second half. Michigan receieved the halftime kick and got a good return by Dennis Norfleet to set the Wolverines up on a relatively short field at the 42 yard line. It would only take one play to go the next 58 yards.

On a designed run call to the left Robinson gets held up in the backfield before seeing a cutback lane that very few quarterbacks can take advantage of. 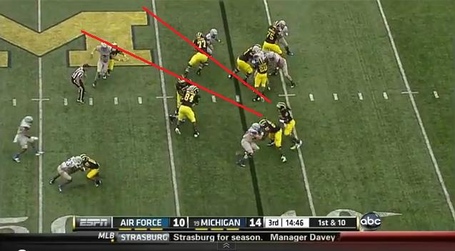 Luckily, Denard is who he is, and 58 yards later that is a touchdown.

Michigan would need that score desperately to extend the lead back to double digits and give the defense some breathing room while it dealt with Air Force's offense. Air Force would quickly answer back.

Late in the game Michigan had moved to midfield, and with under 3 minutes left on the clock and a six point lead, the Wolverines were in a good position to end the game. A first down would put Michigan on Air Force's side of the field with a fresh set of downs to milk out AF's last timeout.

Denard Robinson rolled to the left on third and six and found Devin Gardner settled down near the sideline past the sticks. Robinson fired the ball in low and it looked upon first glance that Gardner had caught the ball. However, instant replay showed that while he had brought it in to his body, that he then braced his fall with his arms, allowing the ball to hit the ground. 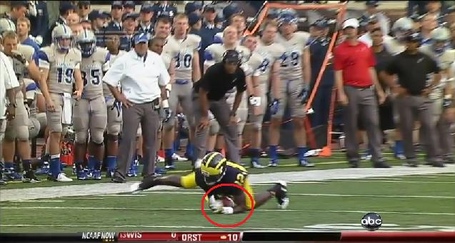 Michigan would punt the ball giving Air Force one more chance to try and take the lead with a touchdown.

Michigan would win the game by less than a touchdown thanks to a defense that put together a strong fourth quarter, and while Robinson ran for over 200 yards on 20 carries, almost three-quarters of those yards would come on two plays. The offense as a whole hardly had a stellar day, but the passing game looks to be rounding into shape.

There are still some issues that the Wolverines will need to work out in the coming weeks, but getting a win was the most important thing on Saturday.