PPP: An explosiveness measure derived from determining the point value of every yard line (based on the expected number of points an offense could expect to score from that yard line) and, therefore, every play of a given game. EqPts is the sum PPP of every play run by an offense. National average: 0.32.

I mean, that was the offense, right? Fitz Toussaint only rushed for seven yards on eight carries, and Denard Robinson accounted for the rest of the team's offensive production. Michigan did do pretty well on offense -- the methodical Air Force offense limited both teams to ten total possessions each -- so Michigan scored a touchdown on 40% of its drives.

Michigan did pretty much all of its damage in the first quarter (1.576 S&P) and third quarter (1.601), had a pretty decent second quarter (0.895), and didn't do very well in the fourth (0.509). The Wolverines ran the ball on 61% of standard downs and threw the ball on 63% of passing downs, but did really well when going against their tendencies. The running and passing games were almost equally effective (0.500 SR on runs, 0.583 on passes) and explosive (0.537 PPP on runs, 0.567 on passes), which makes sense considering that Denard accounted for over 200 yards rushing and passing yet again. Really, there's not that much to criticize numbers-wise for the Michigan offense, 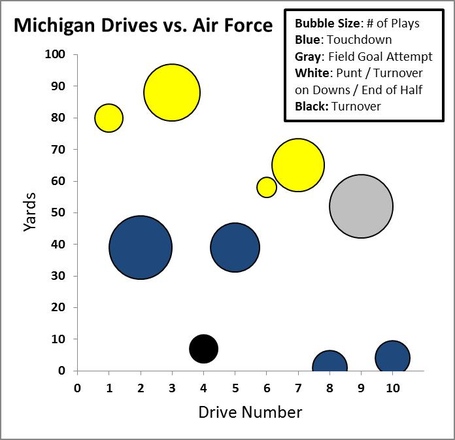 Michigan (er, Denard) ran the ball effectively; a success rate of .500 is pretty good and those two big runs bolstered Michigan's running PPP -- but with Fitz Toussaint only having one "successful" run (basically keeping Michigan from getting leveraged into passing downs) on eight attempts, the onus to keep the chains moving via the ground game was squarely on Denard's shoulders. To his credit, he managed to have successful runs on 13 of his 20 attempts (65%). Even excluding those two long touchdown runs, Denard still managed 81 yards on 18 attempts, good for 4.5 yards per carry. He's an elite runner, there's really not much of a question of that, but Toussaint's extreme ineffectiveness -- due to the struggles of the offensive line, probably -- makes the running game, which looked decent enough statistically, a bit of a question mark moving forward. Through two games (and obvious caveats apply because of Alabama), Michigan's running backs have run for just 49 yards on 27 carries, only five of which were "successful." That's not encouraging, especially if Denard wears down because of running the ball so much.

The passing game -- more Denard, basically -- was also effective against Air Force; the success rate of .583 was better than all but two games last year (Minnesota and Northwestern), and Michigan did have some big plays through the air. Here's how the number of targets broke down:

Passes that were intercepted are not counted

After two games, it's looking like Devin Gardner is Denard's primary target -- he's been targeted 14 times in the past two games (next highest are Jeremy Gallon with 8, Roy Roundtree with 7, and Jeremy Jackson with 5). Devin Funchess was the biggest surprise contributor on offense against the Falcons; he was targeted four times, caught all four passes -- all of which were down the field -- for over 100 yards, and scored a touchdown. Brandon Moore is still listed at the top of the depth chart, AJ Williams played quite a bit as a blocking tight end, but Funchess could carve out a pretty nice niche as a huge target in the passing game on wheel or seam type routes. I'm not sure he's going to be a primary option this season, but it was encouraging to see him play pretty well. Still, it's Gardner, who caught five passes on his six targets, who's getting the most attention from Denard in the passing game. Funchess can, and probably will, be an option on deep routes much like he was on Saturday: those were plays that Michigan set up -- but Gardner and Jeremy Gallon, probably, will be Denard's primary options. As Gardner becomes more comfortable with the position, he'll become even more of a "number one" option.

At first blush -- looking at the score -- Michigan's offense didn't look that great, but their overall performance on a per play basis was actually pretty good. Of course, most of that was due to Denard's prowess in the running game; not much help was given by Toussaint, who was the only other player who carried the ball. Michigan's passing game was surprisingly efficient as well, further corroborating the hypothesis that Denard had actually improved as a passer (even though he had a horrendous game against Alabama, the consensus seems to be that the receivers were utterly dominated and Denard couldn't do anything about that. Roundtree getting muscled into the fifth row on that Dee Milliner INT was evidence of that). Basically, Michigan's offense did as well as we reasonably could have asked of them, with the glaring exception of the non-Denard running game.

Sigh. After looking over the game on a play-by-play basis (and entering each of Air Force's 90 plays into a spreadsheet), it's become pretty clear that they orchestrated a nearly perfect gameplan to spring the upset. Shortening the game by possessing the ball and limiting an opponent's possessions is a classic way for an underdog to increase their chance of winning. Air Force was much better served to be playing in a ten possession game instead of a fifteen possession game -- there's much more variance with a smaller sample size, and one possession here or there could ideally make more of a difference if there are fewer of them. Air Force did a tremendous job of possessing the ball -- they averaged nine plays per possession and Michigan averaged slightly over five. Effectively playing "keep away" and holding on to the ball also had the consequent effect of tiring out the Michigan defense, as Michigan was down to playing several freshmen on defense in the fourth quarter. On a per play basis, Air Force's offense was unimpressive -- an overall S&P of 0.702 wasn't that great. Because of their huge amount of plays run (by far the most that Michigan or its opponent has ran in the last two years), which was due to their pace and their incremental runs of effective distance, Air Force put together an extremely impressive offensive performance. As to the EqPts margin, it was essentially a push, but Air Force could have very well won this game. Maybe they even should have. 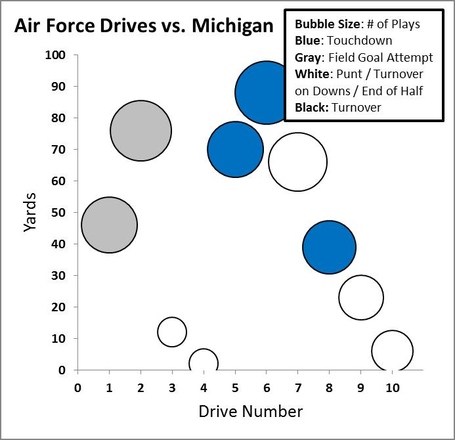 Air Force made it into the redzone twice on each of its first two drives, but missed a 36-yard field goal on its first possession and made one on fourth-and-two from the Michigan four yard-line. Those two possessions, along with an inane fake field goal attempt (on the seventh drive) from the Michigan three yard-line, amounted to three total points for Air Force. If they'd have gone for it on fourth-and-short from inside of the five yard line -- and I'm talking "run your base offense that has been extremely effective" not "run a fake field goal" -- they could have easily put a touchdown on the board at least one of those two times.

When you're the big underdog, you have to shorten the game and you have to take normally impractical risks. Air Force held on to the ball with their bizarre hurry-up offense, but they didn't elect to put the game on the line, take risks, go for touchdowns, and go all-out to score as much as possible even with the risk of coming away without any points. I find it hard to believe that Air Force couldn't have converted a fourth-and-goal from the three yard line from their base offense, and I'm pretty sure it had a better chance of success than the fake field goal they actually ran. The Falcons made it into the red zone six times and scored three touchdowns. Credit goes to the Michigan defense -- which actually had it easier considering there wasn't as much ground to cover -- for being able to come up with some key stops, but I can't help but feeling that Air Force came up just short of an upset because of some poor risk-aversion in clutch situations.

Other than that Air Force had a much better shot at winning than we realized at the time, I'm not sure that there's too much else we can take out of the new math analysis, other than that they had a pretty unusual offense that was an extreme outlier in terms of plays run, and the amount that they ran the ball. Obviously Michigan could stand to shore things up on defense, but hey, a win's a win and the defense didn't wind up ceding any catastrophically big plays. Thank goodness the wide receiver fell down on that wide open seam route.