Share All sharing options for: Michigan Targets at the Notre Dame Game 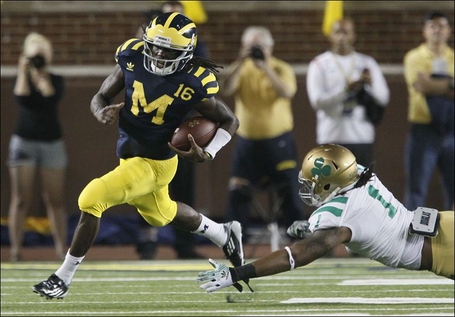 This weekend's Michigan vs. Notre Dame will be a big one. Michigan will be playing their first away game since the opener in Texas. Notre Dame is ranked 11th overall and Michigan 18th. If it's anything like the past couple years, we know this will be an incredible football game. Since it's an away game, most of the commits and recruits who will be attending the game are either interested in or committed to Notre Dame. There are, however, a few 2014 recruits who also have interest in Michigan. As always, this list can change.

Holmes is a 6'1" and 175-pound receiver out of Fort Lauderdale, Florida. He holds offers from Michigan, Florida, Florida State, Rutgers, South Florida, and Wisconsin. Holmes has admitted that he has grown up a Michigan fan, and he has also said that getting that offer was a dream come true. After he camped at Michigan, Tremendous did a very cool thing by letting him write a diary-like entry of his experience at Michigan's camp. You can read that here. In it, Holmes basically says that he went to Michigan's camp primarily to receive an offer, and since he did, he accomplished his mission. Holmes calls his campus tour a "breathtaking experience." He is clearly a Michigan fan, and I think it would be great to get a few Florida recruits on board for the 2014 class.

Snodgrass is a 6'1" and 184-pound receiver out of Springfield, OH. He currently holds double-digit offers including ones from Michigan State, Notre Dame, Ohio State, and Wisconsin. Although Michigan has not yet offered Snodgrass, he will be interesting to keep an eye on. Snodgrass is on the Tremendous List and 247 Sports lists him as 130th player in the nation, the 16th-best wide receiver, and 6th-best player from Ohio for the class of 2014. It also lists him as being "warm" on Michigan State, Notre Dame, and Ohio State. Being from Ohio, I wouldn't be surprised if Snodgrass ends up a Buckeye, but then again, stranger things have happened. As a sophomore, Snodgrass had 13 receptions for 126 yards and 2 touchdowns.

It seems as though there are a lot of excellent linebackers coming out of the Midwest in the 2014 class. Garrett is an absolute beast though and already holds 6 B1G offers including Ohio State and also holds offers from Notre Dame and Oklahoma. He does not yet have a Michigan offer, which I found interesting since he has visited Michigan already. Garrett comes from Plainfield, IL and stands 6'2" and 215 pounds. I believe Garrett is a huge OSU lean. He camped at OSU and called it his "best camp by far." 247 ranks Garrett the 41st best player in the nation, the 2nd best linebacker, and the top player out of Illinois. As a sophomore, he racked up 78.5 tackles, 3 sacks, and 3 forced fumbles. I think Garrett will be a hard get, and I would bet he ends up a Buckeye.

Byrne is a 6'4" and 275-pound offensive tackle from Cleveland, OH. He holds offers from Illinois, Michigan State, Notre Dame, Ohio State, and West Virginia. Byrne looks like he will end up being one of the top lineman from the Midwest for the 2014 class. He has already visited Michigan, but still holds no offer. According to Tremendous, Byrne left Michigan incredibly impressed with everything from the academics to the facilities and the coaching staff. Although Michigan hasn't offered Byrne yet, he has been told that he is one of their top options for the class of 2014. The coaching staff clearly left an impression on Byrne; he said the visit was a "10." Interestingly enough, Byrne had once named Ohio State his favorite but after his Michigan visit and interview with Tremendous, he claimed he currently has no favorites.

Pierschbacher is a 6'4" and 275-pound offensive tackle from Iowa City, Iowa. He currently holds offers from Iowa, Iowa State, Nebraska, Northern Iowa, and Wisconsin. Offensive line is clearly going to be another focus for the 2014 recruiting class. Pierschbacher has already visited Michigan, and although he does not yet hold an offer, it is thought that he will eventually receive one. I believe part of the reason the staff is waiting to give out offensive lineman offers is because they only plan on taking 4 for the 2014 class. Pierschbacher hasn't named any favorites but has said that Michigan would be hard to beat if and when they offer.

Morgan is a 6'2" and 220-pound inside linebacker from Crete, Illinois (the same high school as 2013 WR Laquon Treadwell). Obviously if Michigan lands Treadwell, it would be make the chances of landing Morgan exponentially better. Morgan currently holds offers from Illinois, Michigan State, Notre Dame, Purdue, and Vanderbilt. He does not yet hold a Michigan offer, but that could change very soon. 247 Sports ranks Morgan the 167th best player in the 2014 class, the 5th-best inside linebacker, and the 6th-best player out of Illinois. As a sophomore, Morgan had 102 tackles, 10 tackles for a loss, 4 sacks, and 2 forced fumbles. Morgan has already visited Michigan and has said he enjoyed his visit.

Glass is a 6'1" and 196-pound corner out of Atlanta, Georgia. Glass has been committed to Georgia for a while now, but he has said that he is considering his options. He plans on taking multiple visits and one of them will be to Michigan. Glass holds almost 20 offers and many of them are from top-notch universities such as Arkansas, Clemson, and Ohio State. He does not hold a Michigan offer, but if he's serious about looking around, I wouldn't be surprised if Michigan eventually offers him. As a sophomore, he had 75 tackles, 5 sacks, and 4 interceptions.

Webb is a Cass Tech (woo!) athlete who plays both corner and wide receiver. He stands 5'11" and 170 pounds and has grown up a Michigan fan. There have been plenty of rumors that Webb was going to commit to Michigan and many people believe it's only a matter of time. His parents, however, want him to take his time with his recruitment and to visit multiple schools. He seems to be getting a new offer after every camp he attends and already holds offers from schools like Michigan, LSU, Ohio State, and Wisconsin. Even though his name is known in the 2014 class, I believe he is still underrated. Webb is the next top corner out of Cass Tech, following in the footsteps of Terry Richardson (2012 Michigan signee) and Jourdan Lewis (2013 Michigan commit). He is a lock-down corner who's recruitment will continue to blow up. I believe Webb ends up a Wolverine, hopefully sooner rather than later.

Lee is a 6'3" and 200-pound outside linebacker out of Indianapolis, IN. He currently holds offers from Ball State, Indiana, Iowa, Kentucky, and Purdue. Lee doesn't have a Michigan offer yet, but looks like he'll end up one of the top linebackers in the Midwest. He has already visited Michigan and seemed to enjoy his visit. Lee is interested in academics and pointed that out to Tremendous when interviewed.

Robinson is a 6'1" and 230-pound outside linebacker out of St. John Indiana. Robinson is actually the younger brother of Michigan basketball small forward, Glenn Robinson III. If that doesn't help Michigan's chances in landing him, I don't know what will. Robinson currently has no offers, but has been hearing from Indiana, Notre Dame, and Michigan among others. Robinson is a versatile player who plays both linebacker and defensive end in high school. I'm sure this is part of the reason the Michigan coaching staff is intrigued. Robinson plans on making a decision during the end of his junior year or the beginning of his senior year.