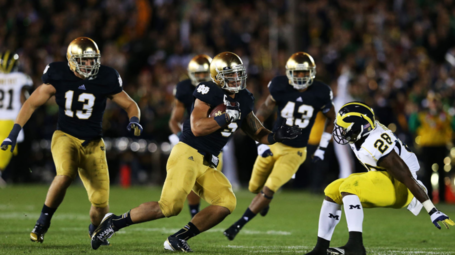 Michigan was hit by the turnover bug big time.

There were six turnovers (you will read that term a lot more in this article) in all. Michigan obviously limited turnovers significantly in the second half, with the only other turnover being a Denard fumble. Michigan lost to Notre Dame 13-6, and if there was one crystal clear reason why, that was it. You simply cannot win a game when you turn the ball over six times.


Although Denard has been Notre Dame's nemesis for the past three years, that clearly wasn't the case this time. The turnovers completely overshadowed Denard passing Chad Henne in accumulating total yards.

The hero for Notre Dame? Definitely Manti Te'o. The All-American linebacker picked off two of the interceptions Denard threw and was largely responsible for limiting him on the ground. On crucial third down runs, it was usually Te'o who made the stop.

It might be hard to process this, but Michigan's defense actually played pretty well. They limited the Irish to under 200 yards and got two turnovers of their own, forcing Notre Dame coach Brian Kelly to bench redshirt freshman quarterback Everett Golson (who many believed would be the difference maker in this game) for veteran quarterback Tommy Rees. Ironically, it was Rees who scored the only touchdown for the Irish, on a goal line quarterback sneak into the endzone.

Michigan holding Notre Dame to 13 points doesn't mean much when you only put up two field goals. At the end of the day, the only thing that matters is the final score. There will doubtlessly be tons of angry Michigan fans who put all of the blame on offensive coordinator Al Borges for the playcalling.

Was there bad playcalling? Sure. The would-be trick play by Vincent Smith which turned out to be an interception is certainly worth criticism. It's the type of play, however, that gets you a big pat on the back when it works and a big smack upside the head when it doesn't. I don't fault Borges too much for that.

Nor do I fault the offensive line, which I was worried about most going into this game. They looked surprisingly good and gave Denard all day to throw. The defensive line, too, performed moderately well against the run, up until the fourth quarter, when Notre Dame had all the momentum.

But really, the thing that killed Michigan most was the turnovers. Denard was shredding Notre Dame on his first couple of drives, moving the ball down the field by finding Devin Gardner. One interception quickly became three as Denard threw one on each of his next three passes, killing three straight drives.

I mean, what do you do going into the second half? Do you bench Denard and simply bring in a new quarterback (Bellomy or Gardner)? Or do you just run the football and never pass again? It's a tough call. I don't think you can bench Denard because he's too dangerous with his feet. The running game was sporadic at best, and you can't become predictable when the game is as close as it was.

That's another thing that needs to be considered. It's not like the game was a blowout loss. Michigan, especially their defense, stuck with Notre Dame the entire game. The only time Notre Dame even scored a touchdown was off an interception that Denard threw, putting them inside Michigan's 40. They never crossed the fifty and scored a touchdown on the same drive.

It's tough going forward. The Notre Dame game has so often been a measuring stick for where Michigan is as a program year in and year out. The Alabama game showed us that we're not ready to compete for national championships yet.

What has the Notre Dame game shown us? Our defense can make plays. They can stop the run. Our offensive line can give the quarterback plenty of time to pass. And perhaps most obviously, our quarterback needs work. Denard really needs to adjust his decision-making if we're to have a successful season.

For years I've been wondering when Notre Dame is finally going to break the losing streak against Michigan, and this year, it happened. When a rivalry starts to get lopsided, it puts more pressure on the other team to turn the tide. There was no way Notre Dame was going to overlook this game. Hats off to them, because they made great takeaways when they needed to and capitalized on Michigan's mistakes.

Although we lost to Notre Dame (which wasn't completely unexpected), there are two more rivalry games left to play. And Michigan State and Ohio State both look very winnable.

Be sure to check out The Michigan Fanatic for more occasional opinion-editorials and retrospectives.