PPP: An explosiveness measure derived from determining the point value of every yard line (based on the expected number of points an offense could expect to score from that yard line) and, therefore, every play of a given game. EqPts is the sum PPP of every play run by an offense. National average: 0.32.

Obviously things didn't go well: Alabama dominated Michigan in almost every facet of the game. The most shocking part of the game was how quickly and efficiently Alabama was able to distance themselves from Michigan -- after going three-and-out on their first possession, the Tide scored three touchdowns on three consecutive drives, kicked a field goal, and found themselves up 24-0 early on. Midway through the second quarter, an easy interception return for CJ Mosley pushed the score to 31-0 and put Michigan out of reach. The first quarter was particularly bad for the Michigan defense; Alabama's first quarter S&P of 1.490 is just as absurd as Alabama's three touchdowns on four drives. Here's Alabama's drive chart: 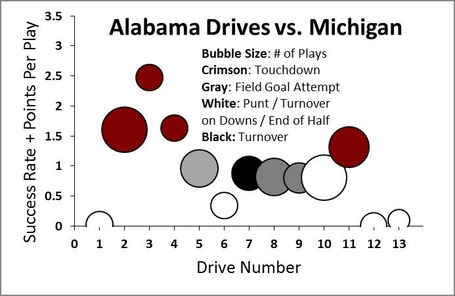 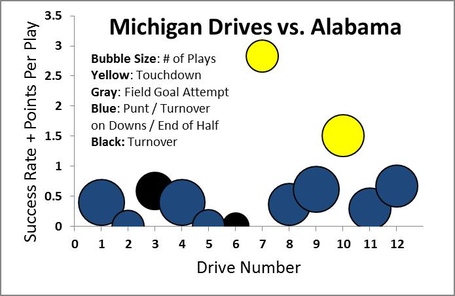 Michigan's offense didn't do anything until that deep pass to Jeremy Gallon to set up Michigan's first touchdown, and by that point, the Tide had already leapt out to that 31-0 lead. There's not really too much that can be said about the Michigan offense -- the running game was horrible (0.415 S&P), the passing game was very inconsistent (0.417 success rate, as well as three interceptions). Michigan's two touchdowns came as the result of big plays: the long bomb to Gallon set up a short Denard Robinson run, and a 44-yard touchdown to Devin Gardner were Michigan's only two scores. Without those two long passes, Michigan's PPP would be a measly 0.130 -- Michigan only had two other plays of longer than twenty yards. Michigan's rushing attack was hurt by the suspension of Fitzgerald Toussaint, but none of Michigan's runners -- including Denard Robinson -- were able to move the ball.

Smith and Rawls were each extremely ineffective -- they rushed for a combined 42 yards on 19 carries (2.2 yards per carry), and 22 yards were gained on one run by Smith. Denard was a little better, but he still rushed for under three yards per carry. Simply put, the Alabama defense was suffocating at the line of scrimmage, and Michigan really had no hope of running the ball.
Perhaps in anticipation of those struggles running the ball, Michigan tailored a gameplan that had Denard throwing the ball from the pocket frequently. The stat line was ugly: Denard went 11-26 for 200 yards, one touchdown, and two interceptions. The interceptions were especially brutal, one was to a wide-open Dee Milliner after Roy Roundtree fell down, and the other was the pick-six by CJ Mosley (Russell Bellomy also threw a pick in his first and only career pass attempt). Outside of that, it was still pretty rough sledding for Denard and his receiving corps:
Note: targets where passes were intercepted do not count
Denard saw a little success throwing to Gallon, but frequently targeted Gardner as well, even though Gardner only caught one pass. Gallon was really the only Michigan receiver to have a decent game, the others didn't gain much yardage and Gardner saw six incompletions thrown in his direction. Credit to Al Borges for getting Gallon involved in the passing game (even throwing some bubble screens, which worked!) as everything else failed for the most part. Michigan needed some big plays to stay in the game and they got two of them, but the offense was completely shut down by Alabama otherwise.
There were a few bright spots for the Michigan defense, which performed a bit better after that disastrous first quarter. Alabama scored 21 points in that quarter (and had an S&P of 1.490), but the Michigan defense held the Tide to only 13 points in the remaining three quarters (none of the remaining three quarters had an S&P over 0.9). Michigan's run defense was poor throughout the game; the Alabama offensive line blocked extremely well, opened up big holes for talented running backs to get to the next level, and those backs -- notably TJ Yeldon and Eddie Lacy -- were able to pick up sizable yardage on almost every carry. Alabama's rushing success rate (0.595) was incredible, and although they broke off a few big runs, most of them were just decent chunks of yards after getting brought down by some linebacker or safety. It didn't matter who ran the ball -- Yeldon, Lacy, Jalston Fowler and Dee Hart each carried the ball at least eight times -- the Tide were just too strong for the Michigan defense. Thankfully the Wolverines won't face a rushing attack that even comes close to Alabama's exceptional offensive line and deep stable of impressive and multi-talented backs.
That dominance on the ground was what propelled the Alabama offense towards the comfortable win, but the Michigan defense held up enough after that initial onslaught to prevent a complete blowout. AJ McCarron had a good game (11-21, 199 yards, two touchdowns) and still faced a decent amount of pressure from Michigan's pass rush. Alabama passed the ball extremely well on standard downs (S&P of 1.323) but struggled a bit on passing downs (0.629). Michigan's struggles against the pass on standard downs is understandable; they probably anticipated run on most plays because of how well the Tide moved the ball in the running game. Still, Michigan's decent pass rush against the country's best offensive line is encouraging -- the Wolverines will be able to get much better pressure down the line against less talented and less experienced offensive linemen. Michigan was without the help of Blake Countess in the passing game, and even though Countess is out for the season, the coaches should be better equipped to plan for his absence for the rest of the year.
---
There's not too much constructive analysis from this game -- Alabama's defense, with the exception of a few plays, was utterly dominant, and Michigan's defense struggled against the Tide's spectacular offensive line. It's probably just best to move on and look at Air Force for next week, because frankly, Michigan was outclassed in almost every facet of the game against Alabama.