MRR updates you on the very latest Michigan football recruiting rumblings. Who is Michigan's newest member of the 2013 class, and what is his potential? Which key 2014 athlete surprised some by committing to Ohio State? That and much, much more.

Twitter is to Anthony Mammel as offensive lineman are to Brady Hoke. Michigan has added its sixth offensive lineman in the class of 2013, and his name is Dan Samuelson. The offensive guard is rated four stars by Scout and three stars by everyone else. Read our New Blue post to find out why he'll fit right into Michigan's offensive scheme.

Michigan doesn't necessarily have to take anyone else in this class, but it obviously will. Derrick Green is priority numero uno, and he'll be deciding on January 26th at 4 pm. He should be blue, although he's still planning on taking two more visits. From Sam Webb and the Detroit News:

Said Green, "I still have two (visits) out there, and I'm still looking at some other schools, so I think I will take the last two officials. "

To date the five-star running back has taken official visits to Michigan, Tennessee and Auburn. He hasn't yet determined where or when he'll take those final two trips, but most believe that if he does take them, that Miami and Florida State will be the destinations. Those schools will face the increasingly difficult task of catching the team that Green acknowledged publicly last week as his favorite.

"Michigan, they're still the leader," he said. "They're up there, but other schools are still in the mix."

The chances of him visiting a school last-second and committing thereafter are slim to none. If he isn't blue you can punch me in the face.

Michigan is also in pursuit of Laquon Treadwell, who will decide this Thursday. Ole Miss, Oklahoma and Oklahoma State are the top three here, with Michigan on the outside looking in. I still wouldn't be shocked if he picked Michigan, but I'm also not counting on it.

The Wolverines could feasibly take another offensive lineman. If the number rises to seven I think it quickly drops back to six, as someone will see too much competition and jump ship. Cameron Hunt and Dan Skipper are the two legitimate options there. The staff could also offer a linebacker, corner, defensive lineman or general athlete leading up to signing day. Someone is bound to come onto the scene in surprising fashion.

Derrick Green had an impressive outing in the Army All-American Game. Take a look:

Shane Morris and the rest of the Michigan commitments at the Under Armour All-American Game throw up the block M: 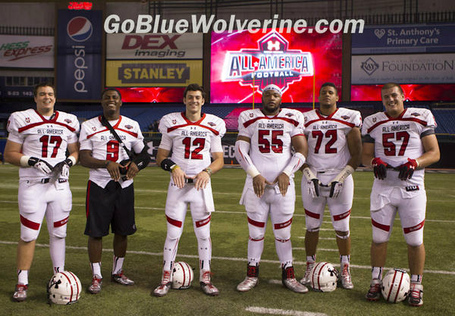 More pictures from the UA game via Scout.

Both the Under Armour and Army weeks included underclassmen combines. A few key 2014 Michigan recruits impressed at the Army combine:

Kenny Finley
Muskegon (Mich.) | 2014
Finley is a good sized kid with quick, agile fit and did a great job with his hands. The question right now for him is if he'll be an inside guy or an end. Based on the way he plays, and growth potential, I think he'll be more of an interior guy. Either way, he deserves the D1 attention he's getting.

Gelen Robinson
Saint John (Ind.) Lake Central | 2014
Robinson looks good on the hoof as far as muscle and build. He did well in 1-1s, winning several reps and showing good athleticism. He's not a tall or long guy, so the question on him is position. Can he grow into a defensive tackle or will he stay on the edge and be a rush guy ala Jason Hatcher? Regardless, he's a D1 guy.

Finley should end up getting more attention than Robinson. It's worth noting that Gelen is the younger brother of current Michigan small forward Glenn Robinson.

Finally, check out DGDestroys' piece on the All-Star games.

Have a half hour to waste on anything you want? Obsessed with recruiting to the point that you read articles about recruits that Michigan has no realistic shot with? This video of a day in the life of Reuben Foster is just the video for you:

Linebacker Alex Anzalone was once part of the Ohio State class of 2013. Notre Dame took him away from them, and now Florida has taken him away from the Irish. I normally won't write about happenings like this one, but I really like Anzalone's film and wish that Michigan wouldn't have turned him away.

Cass Tech 2014 athlete Damon Webb has unfortunately committed to Ohio State. Webb reminds me of.. gulp.. the Honey Badger. So there's that.

Class of 2014 WR Demarre Kitt has been offered by Michigan. His highlights:

Scout has released new 2013 rankings. The most notable movement was that of Derrick Green, who is now the top running back and number six overall. Maurice Hurst, David Dawson, Taco Charlton, Chris Fox, Jourdan Lewis and Patrick Kugler all moved up as well. Kugler is the top overall guard.

Class of 2014 QB David Cornwell could be the first offered by Michigan at his position. He likes the UM alumni base:

The Michigan Alumni/Fan Base is amazing, always proud of their school and support of their athletes great to see, good reason to go there...

Class of 2014 super recruit Da'shawn Hand has a top five:

He's bordering on Clowney talent so just getting into his top 5 is an accomplishment.

LB @reubenfoster_fg told me today he has not set up a visit to Michigan yet, but would still like to.

I do what's best for myself and my family, and that is why I committed to Michigan. Nothing against Nebraska and staff. Upmost respect.

Honesty is a good thing. 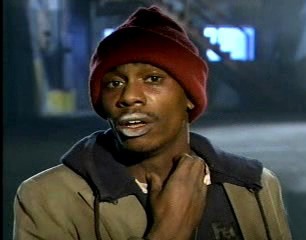 ..then this picture sums up the name of this article.

Last and most definitely not least, take the time on Twitter to congratulate the guys over at Tremendous for joining the 247 Sports team:

I'm looking forward to working w/ @swiltfong247, @clintbrew247 and the rest of the @247sports crew to build the Wolverine page into the best

Pretty cool to see hardworking guys turn a hobby into a job. Tom VH lit the path and these guys followed not long behind.