Because stout beer is stout.

Share All sharing options for: YFD Drinks Stouts In Hopes Of Stouts

I've been doing some thinking about how Michigan's line has graded out and how individual players could be rated in terms of beers. I'll reevaluate this weekend and rank them next week, but my hunch is that the interior line has been playing like a hard cider. Overly sensitive, no body at all, and not even as good as shitty light beer. I'll check, though. The obvious antidote to this suckage is beer. Real beer. Dark beer. Darkness, like Simon and Garfunkel type darkness. The type of beer that makes you sad when you drink it. Not because it's not beautiful and delicious, but because it makes your soul own up to some tough questions you didn't have the balls to ask.

What's that? Oh, that's just hair growing on your chest. I'm looking at you, 30 yards on 27 carries or whatever.

I'm jumping ahead to the part of the schedule that allows me to drink stouts whenever I want. Winter beers are basically out (most stouts, not all winter warmers yet) and Michigan's playing like, well, the opposite of stout. But that's okay. Because hopeful me is hopeful. Also, at my current rate of alcohol consumption this season, Michigan's going to literally kill me during roughly the third quarter of the MSU game. I want to live, dammit.

So today and tomorrow I'm switching to stouts. They're super hearty, very filling, and it's tough to get hammered on copiously unless you are one of the following: 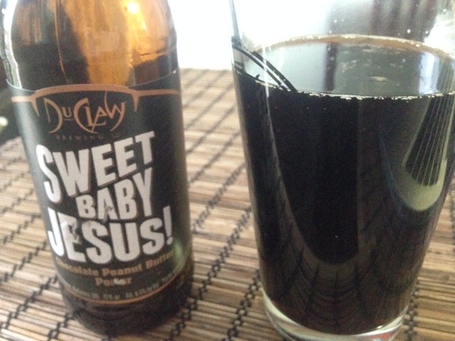 Anyway, so now that we've established your stout-drinking credentials, I have more questions for you. Do you like coffee? Do you like chocolate? What about peanut butter? Dirt? Peaty topsoil? Scotch? Good, because stouts are all of these things as well. Mostly dirt. But like the dirt you like to chew thoughtfully for a while. It puts hair on your chest.

This week I'm drinking DuClaw's Sweet Baby Jesus, which clocks in at a relatively high 6.5% and tastes remarkably like a peanut butter and beer sandwich. It looks like flat Coke in color, so it's black as pitch, and seriously, peanut butter. Like, what the hell peanut butter. But it's actually not too sweet and kind of tasty, especially since I just put down a Guinness Extra Stout, which people like, apparently a lot. DuClaw is an awesome brewery with balls. So, good stuff. More on them later.

Until next time, Michigan Faithful - cheers!