In this article we will get a primer on how the Isolation play is run and why. With Michigan making a change on the OL, this could potentially become a larger part of the offense.

Share All sharing options for: Inside the Playbook - Isolation (Iso) Run Primer

With the move of Glasgow to center and the insertion of Bryant into the lineup at LG, it means a few changes may be in order. Bryant, less the fleet of foot and more the very large, squatty man that is more of a hitter and less of a reacher, probably indicates that Michigan will go to more of a traditional man blocking scheme. Add on that Glasgow isn't the quickest of players for the center position in a stretch run team, and it's likely that Michigan will be running less zone stretch and more gap blocking type activities (with the occasional inside zone mixed in). Because of that, it seems a good time to add onto Power O blocking piece and look at how Iso is blocked and what the RB is looking at. 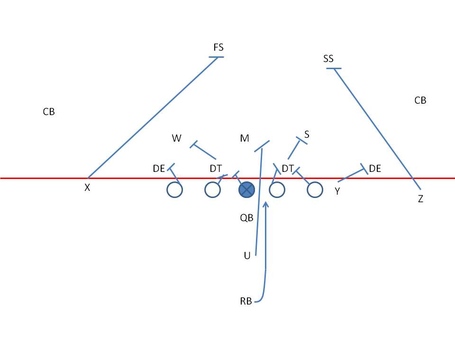 Note here that this is a strongside Iso. The center comes off his combo block almost instantly because of the aggressive nature of Notre Dame's LBs. He is letting the LB take himself out of the play, essentially combo blocking to him without doubling at the point of attack.

Basics
Before diving into specifics, let's just start with the basics of the isolation play. The play can either be run through the 1 or 2 hole - off either side of the center - or it can be run off the guard in the 3 or 4 hole. The difference will be in who is the isolation player. It's called iso because one of the LBs will be isolated for the FB to block with the other LBs will be blocked with a combo from the OL. If it's run off the center the MIKE will be isolated, otherwise, an OLB can be isolated.

While the Iso play is often viewed as a limited upside play, that isn't necessarily true. Sure enough, if it's used as a base play, the Iso itself probably will not go for big chunks. That doesn't preclude it from being a play that should constantly pick up 3-5 yards against 8 man fronts though, meaning you can still move the chains with it. However, if it is used in moderation, then it can pick up decent chunks, and it can pick them up in a hurry.

The key to stopping the Iso is to meet the FB in the hole before he can cross the line of scrimmage (LOS). LBs that are combo blocked to can beat the OL off their block. What this all means is that LBs need to play very aggressive and very down hill. If Iso isn't the primary run play, then you can catch the defense off guard and break through the LB level quickly. If it is a primary run, it does very well setting up play action, particularly run plays that take advantage of aggressive defenses over the middle.

Now, as far as the offensive line, it's fairly simple. You pretty much block the man in front of you. If there is a NT lined up to playside then the playside guard (PSG) and the center will combo to the LB. If the NT is lined up head up or to the backside, he'll combo with the backside guard (BSG) to the LB level.

Quarterback Technique
The QB will reverse step to 6 O'clock and gain as much depth as quickly as possible. It is essential that the RB receiver the handoff as deep as he can in the backfield. After the handoff the QB can roll either way. Because the initial steps before the handoff are straight back, it's unlike power where the footwork would be awkward escaping to the playside. He can also drop straight back to better attack the middle of the field to really take advantage of the quickly crashing LBs. This allows any boot action to threaten either side of the field and really allows the QB to threaten with his legs on the edge, or it allows the QB to threaten the defense with the pass.

Runningback Technique
Let's start with the FB. The most common Iso play will be to isolate the MIKE. The first step will be directly at the outside leg of the PSG. He will block the first LB he sees from the centerline out. Allow the LB take himself out of the play if he's willing. If he over-scrapes to the outside, seal him to the outside. If the MIKE tries to squeeze the play inside-out, then seal him inside up behind the DTs so that he can't slide underneath. If the MIKE tries to take the hole square on, then let the FB take him straight on and drive him out of the hole. The RB will make him wrong. He will read the FB's butt. Let the LB take himself out of the play, pick a direction and let the RB run by. If the MIKE doesn't pick a direction, or doesn't leave an arm free, then the FB is able to block his whole body and should be able to drive him and shouldn't allow him to disengage before the RB can run past.

The RB will a lead step and crossover (some will drop step here, it's a preference thing). This gives the QB time to get depth. This is important because it is such a quick hitting play. The RB still needs time to read what the defense does in front of him, and the only way to do that is to get the ball with some depth. His aiming point is the outside butt of the PSG, the same as the FB, whom he wishes to follow.

Wide Receivers Technique
The CBs are really no threat to anyone on an Iso play. They can't really blitz off the edge and get home on time. They will rarely come down and be a box defender. Therefore, the WRs don't really concern themselves with the WRs. Instead, they should try to work their way to the safeties to try to prevent and fill or spill defenders from making a play.

Offensive Line Technique
We'll get into more depth next time about offensive line responsibilities when we go over the blocking adjustments for different fronts. For now, let's focus on the fact that for the most part the OL blocks the man in front. What makes this difficult are stunts and slants. Teams that run Iso a lot will face a lot of slants. Because of the quick hitting nature of the play, it is difficult for the OL to readjust and get a proper angle on the DL and combo to the second level. This is why it is so important for the RB to get the ball deep in the backfield. His adjustments can right the OL when the OL is put in positions it can't possibly succeed. It's because of this that makes the Iso a safe play to pick up consistent yardage, even when that consistent yardage isn't huge gains.

Iso Adjustment
If you're looking at the play drawn up above and thinking "that looks a lot like a lead draw," well, then let me explain. Anymore, "lead" and "Iso" are used a bit interchangibly, even if they didn't start out that way. Offenses who loved using the I-formation and loved running Iso because of its dependability, started seeing teams get very aggressive attacking it and found that it was getting more and more difficult to run the football with the Iso. This lead to the "lead draw" play, which forces the LBs to respect the pass and drop off rather than quickly filling. It also gives the OL time to adjust to the DTs and get proper angles on them. On top of that, it allows the QB to get the ball to the RB deep in the backfield. All the things you want from an iso play, simply by threatening pass initially.

Next Time
Next time we'll get really into some specifics against different fronts. These are the basics though, and some of the things that a team faces when attempting to run Iso, and what the mindset is for an Iso team.