We take a look at Michigan's unbalanced formation in which is utilizes the Double Lead O with 22 personnel on the field.

Share All sharing options for: Inside the Playbook - Unbalanced Double Lead O

Saturday, Michigan deployed an unbalanced time for the first time this year and found success with it. In theory, the run plays out of an unbalanced line aren't required to be any different that a balanced line. You can run Iso to strength and away from strength. You can run Power O to and away from strength. You can run your counters and zones and sweeps. But, if you're going to line up your two best blockers on the same side of the formation, you might as well pull and lead so that you are completely dominating the point of attack. That's what Michigan did against Minnesota, when they pulled out the "Double Lead O" play to run between Lewan and Schofield and get consistently good yardage.

Terminology
Once upon a time there was a difference between "Lead" and "Iso". That difference pretty much summarizes the difference between "man" and "gap" blocking. The summary, in today's lingo, is often that there is no difference. Needless to say, the terms are fairly interchangeable today, but we will call it double lead because it is technically a little more accurate.

"O" is something you often here with "Power O". You'll also hear things occasionally like "Power G" or "GO Sweep". The "G" and the "O" determine the pulling guard. "G" means the playside guard whereas "O" means the opposite guard.

So "Double Lead O" will be two lead blockers and a backside pulling guard. The play call will also include strength of the formation, the formation itself (including the unbalanced line), the motion, the intended ball carrier (denoted by a number), the intended hole, and the play call. It'll end up something like (but probably completely different) than "Right Rhino I Over Zap 46 Double Lead O". "Right" means TE to the right, "Rhino" is the formation (Wing lined up just outside of TE), "I" is the backfield formation (I-formation), "Over" is flipping the OT over, "Zap" is a motion that goes across the formation then comes back from the Z-receiver (wing here), "4" is the tailback, "6" is the hole the RB is trying to run through, "Double Lead O" is the blocking system. Very little of this will translate to other systems. It's a problem in football: there is no consensus on terminology on a lot of things, not even close. On other things, there is, which makes it even more confusing.

The Play
Here is how the play is blocked against an over front. 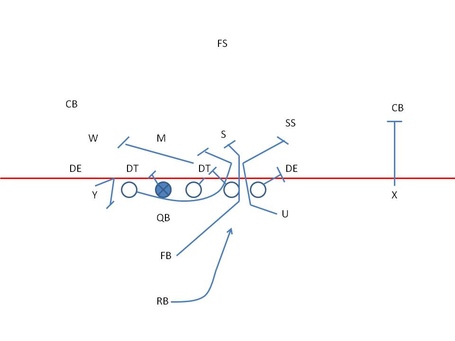 A bit of a preface: Michigan ran a true unbalanced look where the TE wasn't covered (they did this when they passed, FWIW) and where the TE was covered. In the two videos below, the TE is actually covered. This makes passing less likely, but also makes the blocking easier because it typically will force a CB to be an extra box defender. For the most part, getting a lead blocker out on a FB with everyone else blocked up within the structure of the play is a very good thing.

Offensive Line Blocking
A big reason why Michigan will like to run this formation is because of what happens at the point of attack. Let's forget for a minute about the 2 extra lead blockers in the form of a FB and a U-back, and focus primarily on the OL.

On the play side, Lewan is responsible for kicking out a DE lined up outside of him. This is not a difficult task for Lewan, especially as DEs increasingly are trying to get up field to maintain leverage. The fact that Lewan - one of the nation's best run blockers - can latch on and drive the DE way out of the play, means a big hole will open up. On the other side of that hole you have a former guard, Schofield, combo blocking with a true OG on the DT to the backside LB.

The pulling backside guard is coming around and looking for the first off color jersey past the DL inside of him. Frankly, he doesn't even really care if someone is already blocking him, if he doubles that guy he will block him into any backside pursuit.

Lead Blockers
The two lead blockers are the first ones through the hole. The reason I have called this play "double lead" instead of something like "double Iso" is for two reasons: 1) Double Iso (known as power Iso) was a play that teams ran out of the Maryland I in the past where the two lead blockers literally double teams the Isolated defender, so the connotation is that you are doubling a single isolated defender by calling it "double Iso"; and 2) You aren't really Isolating anyone, in fact, the U-back will take the first off color jersey outside of him after the first level and the FB will take the next guy through, from inside or outside it doesn't matter. What point 2 means is that if an opposing team walks down a 9th guy and Michigan still runs this, the U-back will block the first guy he meets to his outside and hopefully this will seal the outer most guy anyway. And if no one is outside he'll work up to the safety level and it'll be a huge gain because the defense is terribly aligned. The FB is just pounding anyone that tries to get to the RB rather than purely isolating on MIKE.

Adjusting to Other Fronts
The question becomes: is this more of a lead play or a power play? Let's first look at it as a lead play and we'll take a look at how an offense will block it against an under front with an 8th defender walked down. 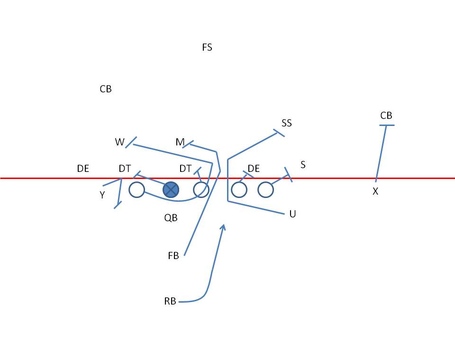 The positive here is that you are still kicking a DE with one of your best players, as well as a LB with your best blocker. The downside is that the NT is single blocked inside. But, if that guard can hold up against the NT and Schofield can get enough push, there will be two blockers working through MIKE, which means that the hole in the second level should be large.

Now let's look at it as more of a Power run. Now the U-back is going to kick the DE. It is the U-back that does this so that the FB can read this block. If you flip the U-back and FB assignments, the play can easily be blown up with confusion at the LOS. The positives here are that you are double the DE with your two best blockers at the point of attack. This should massively open up the hole. Then, your FB is lead blocking on a DB most likely, which should be a big win. 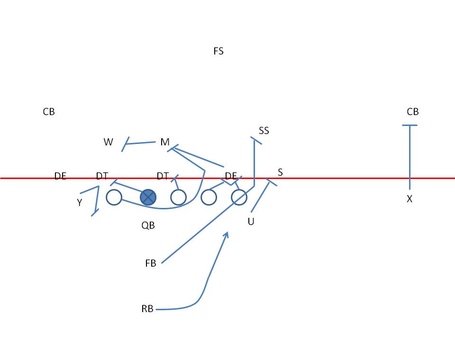 And if that SAM LB tries to sneak inside and the defense trust the secondary defender to maintain leverage, well, good luck. 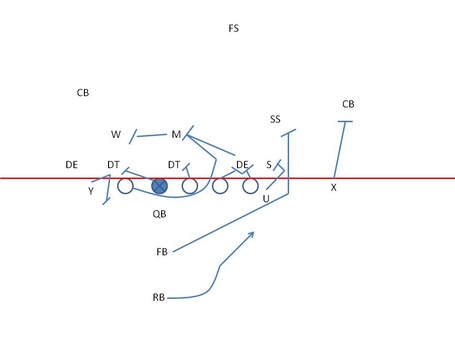 If you're looking for me to guess which adjustment will be made, it should be pretty obvious with the name of this piece. I think the play shifts more inside and remains a Lead play rather than Power, but this goes to show that Power is a more than viable option as well.

The Weakness
The obvious weakness to this play is similar to the obvious weakness of the normal Iso play. No, it's not that there is limited upside to this play, which, with so many blockers going through the hole at the point of attack, is not the case. No, the biggest problem happens when the LBs start shooting the hole and meeting the first blocker through. The problem that happens then is that it clogs up traffic, and the other 3 players can't fit through the hole.

But there are obvious off-sets to this problem. The Y-TE is lined up even closer to MIKE. If the MIKE is aggressive, pop passes can back him off. Because of all the power to strength, flare screens or GO sweeps also provide great running plays that provide similar numbers at the point of attack but attack outside rather than inside. If the MIKE is reading pull and shooting the B/C gap, then he'll only get caught in the wash by doing so.

So the key for Michigan is to continue establishing this run, and build on this formation with other runs. And then, just like with any normal balanced line, the defense will be unable to account for everything in the run game.

Conclusion
This is not a formation that you'll see once and never see again, because it isn't a gimmick. This is a formation that provides real benefits in the run game. Yes, the pass game is a bit less of a threat because you have no true OT on the backside, but play action plays, screens, and max pro blocking can allow the offense to still effectively threaten the defense with the pass, and in particular, deep, from within the confines of this formation. As long as the defense is forced to respect those things, then this looks to be a good twist to pick up tough yards running the football.

And for those worried that the diversity won't come: Michigan ran unbalanced last year against South Carolina in the bowl game, and at that time, if I recall correctly, it was mostly a Power scheme. So there is variety to this, and as Hoke said, it's something they've worked on since fall camp started. It isn't going away.