Inside the Playbook - Dictating MSU's Coverage

In this post we look at ways that Michigan can attempt to force MSU's hands to get favorable match ups for Michigan's pass game.

Share All sharing options for: Inside the Playbook - Dictating MSU's Coverage

In this post we are going to look at a few different options that Michigan's offense has to get MSU a bit out of their comfort zone and to try to take advantage with favorable match-ups. In this instance, the run game would just be simpler to explain, so we'll focus more on how Michigan can do some things to present favorable match-ups for Michigan's passing attack.

Stack/Bunch Formations
Michigan under Borges helm has not shied away from stack or bunch formations. While they don't run them as often as I would like them to be run, they are quite prevalent within the offense. Against MSU's press coverage it makes sense to run them more. Why you may ask. 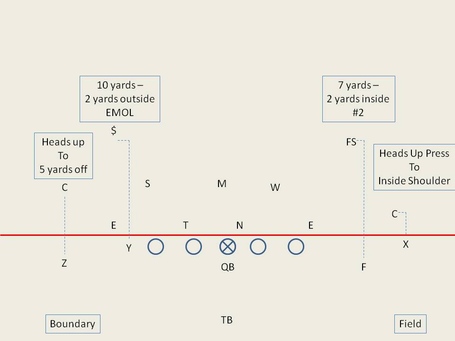 Here is how they adjust 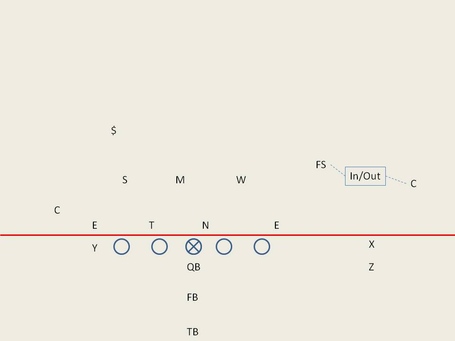 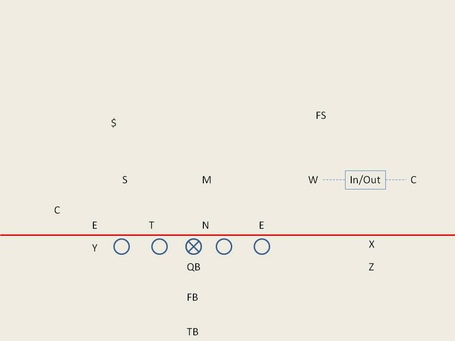 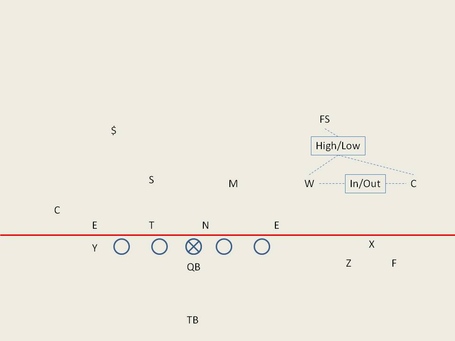 The big difference is that they no longer press the outside, instead preferring to play and in/out release against the stack and an in/out high/low against bunch.

What this allows is for the Michigan receivers to get off the line cleanly and into their routes. More than that, it forces MSU's DBs to pick up the receivers after they have gotten into their routes, which is necessarily an awful position to be in, but it does make it more difficult for them to dictate and control where the receiver can run.

From this they can run a variety of concepts to isolate themselves on certain receivers. With protection, this gives Gardner time to make a relatively easy read: throw to the receiver that doesn't get help. This is a key way that Michigan can stretch the field or run triangle concepts to pick on the LBs underneath or isolated DBs over the top.

Like all things there is downside here though. This, for the most part, completely negates any WR screen ability. Bubbles are nearly impossible (they are very difficult against a standard alignment) because you can't get outside leverage on the block. Throw backs are difficult because the aiming points and runs are directly in front of the DBs (the only advantage here is that you already have them off the LOS). With the stack, you are also really losing the ability to attack outside in that direction because you have no way of protecting the alley. Any sort of even off tackle run is easily threatened off the edge because the crack block is difficult to reach. Which brings up the last point: MSU can blitz DBs from this because it's difficult to get into routes quickly with enough separation to run good, quick, hot routes. So when these are run, they must be run with care. 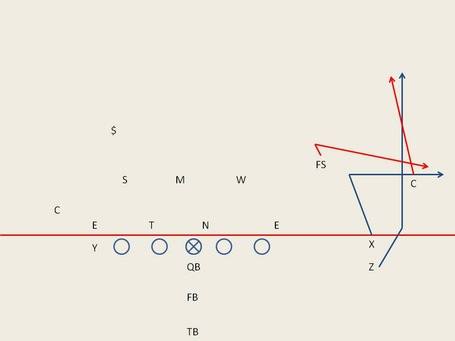 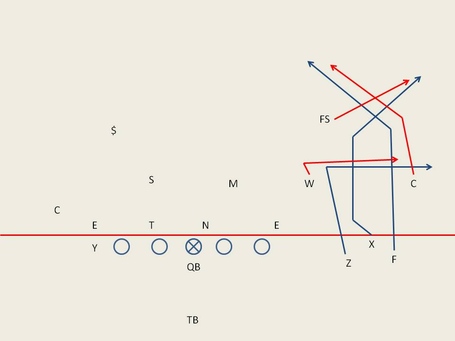 Trips Sets
There are a couple ways that MSU can adjust to cover trips. 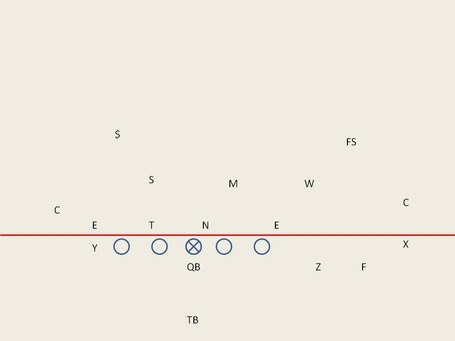 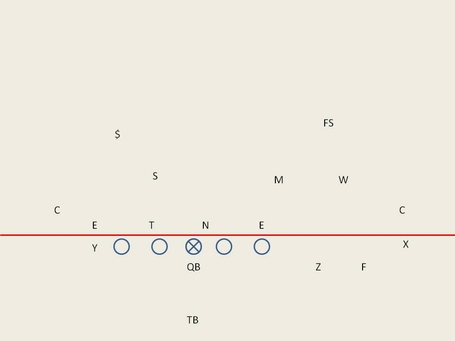 One of two things is going to happen here. Either the Spartans will have no help over the top along with a LB matched up with a WR, or the underneath zones are going to get extremely spread out to allow the inside receivers to work in the voids that can be left in the underneath coverage. A trips set exploits the fact that the cover 4 leaves you somewhat exposed underneath.

The issue here is that there is a variety of edge pressure from both sides. It's difficult to say Michigan is comfortable going with 4 WRs, so likely MSU is going to adjust to a cover 2 on the TE side. This means that they can send CB pressure to that side, as well as send LB pressure from the trips side. It potentially leaves the QB exposed. But if Gardner can read the situation quick enough then it does have the ability to get the ball out fast. The worry is that MSU can run some tweaks to their coverage to throw off those reads which can lead to disaster. 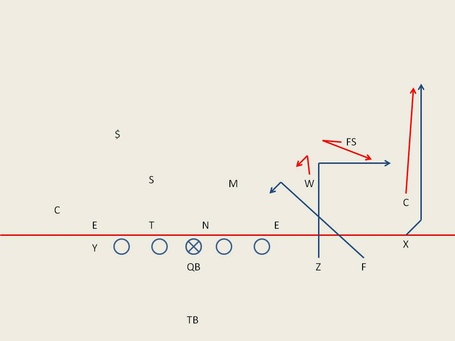 Flare Screen
The last two sets have discussed carrying the defense deep and spreading them out. It forces them to focus on the receiver at hand. This will often lead to a RB being able to get out of the backfield on a quick screen pass. It means that a LB is going to have to sprint in his coverage from inside-out, be able to break down in space, and make a play in the open field on a more athletic RB. 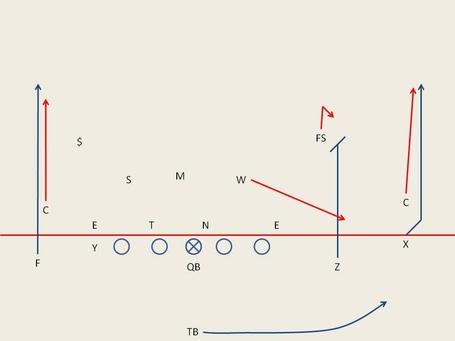 This is a method of getting the DBs out of what is essentially run support, and not allowing MSU of playing help defense nearly as efficiently as they do on typical run plays. The key here is that the RB still has to make a play in space, it still relies on making a play, but if a play is made it can get a guy like Fitz in the open field where he excels.

Attack the Seam/Hole
Now that the defense is spread out and the safeties are helping over the top, it leaves an opening behind the LBs and between the safeties that can be exploited by the TEs. 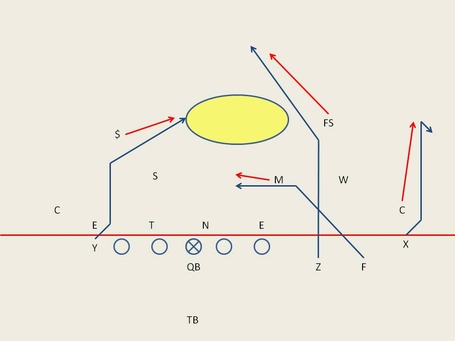 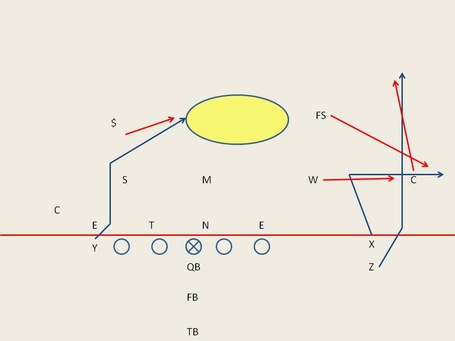 Typically this can be fairly difficult because the safeties essentially will have coverage over the top and the LBs can fit underneath. But now that the defense is rotating over to help on the other receivers, it opens up some other things in the middle.

Conclusions
These aren't solutions. These aren't end all be all ways of beating MSU that I've magically discovered, yet no other team has. Standard sets, balanced, 2x2 sets, etc, all have positives to help succeed against MSU. It's just difficult, very difficult. In my opinion, the things I've mentioned above give Michigan the ability to take advantage of some of the things that MSU does well, by using those things against them. It forces the LBs to do more. It gives Michigan options. And in a game where sometimes it feels like you're running out of options, finding ways to get favorable match-ups can go a long way to moving the ball down the field. Expect to see some of these types of things on Saturday when Michigan takes on the Spartans.