Oh, the joys of sports and the internet.

Share All sharing options for: Da'Shawn Hand and Maniacal Laughter

It's roughly 12:30 pm on this here Thursday. I'm out of my office on lunch at the Red Lion Diner in Bay City, watching my iPhone like a hawk. Alabama and Michigan coaches are watching Hand's decision drag on for what seems like forever; both staffs are just as clueless as I am when it comes to Hand's decision. Minutes after my Rudy's Choice breakfast arrives, I get the idea to look over my New Blue: Da'Shawn Hand post. Just make a few changes here and there via editing on my phone and... 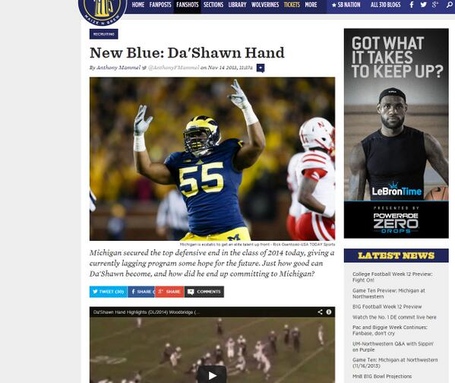 Right there, sitting in the middle of a local restaurant, my palms begin to sweat profusely. My fingers -- which, ironically, aren't fat -- had accidentally published the aforementioned post. A relatively young father is sitting with two daughters some five feet from me, which means the words that would like to rise from my gut and into the air have to wait.

Fumbling my phone around like a Rodriguez-era punt returner, I quickly delete the piece and try to make some cheap comedy out of it on Twitter. This goes as well as anything ever goes in the internet, where thirty seconds is an eternity.

Then my phone starts vibrating. I haven't even looked at it and I already know who it is: Zach Travis has called me one time. This is that time.

"So this Da'Shawn Hand article-- What happened?"

"I'm sitting in a restaurant and attempted to edit the article I had saved on my phone. Accidentally published it and deleted it seconds later."

"Okay. I was just wondering what happened. It's fine -- things like this happen."

I'm lucky enough to have an editor who sees a human mistake as just that. The internet, on the other hand, sees it as hilarious. Idiotic. Ironic. All things stupid.

In front of me is a half-eaten plate of steaming, delicious breakfast food that I no longer have the room to eat. The family of three is still sitting at the table across the aisle, so I'm pressing to get outside and let some words fly. Get me my freaking tab, lady.

Two minutes later, I'm opening the door to Saginaw Street. I wouldn't dare publish the words that came out of my mouth, but the construction workers across the street find it entertaining. You and a few thousand others, guys.

I return to my office in an odd mood, and it's very clear to everyone in the building that I'm just not in the business mood. They're right, because I'm planning to laugh in maniacal fashion when I get to my car at 5:

Go ahead and put the blame on me and my inaccurate fingers.

In all seriousness, I made an easy mistake and apologize to the many Michigan fans who were hopeful that Hand would end up in Ann Arbor. My apologies to the Hand family, as well. I had no inside information about the decision of Da'Shawn Hand, if it isn't already painfully obvious.

In my humble opinion, Hand chose the right school. The University of Michigan has one of the best sport management programs in the world, but Da'Shawn didn't want to go into sport management. He chose his dream school because they give him a chance at his dream degree: engineering. Add in coaching from a staff that produces NFL prospects at a rate that makes the rest of the college football world sick, and it's not any mystery why Hand pushed the Wolverines aside.

This one hurts, regardless of the nuclear explosions caused by my accidental publishing of an inaccurate article. Securing Da'Shawn Hand would have meant that Michigan had its two best football recruits in the history of the program -- in one class. Now, Jabrill Peppers will have to play impossibly tight coverage on receivers who will have more time to find open grass.

It's also depressing to think about the state of Michigan's football program as it currently is. After years of terrible play under the Rodriguez staff, Michigan is again struggling to play with any team capable of moving the ball or playing average defense. The first two relatively successful years of the Brady Hoke regime are in danger of being forgotten if he doesn't salvage a sinking ship sometime in the near future.