Inside the Playbook - Pass Protection Schemes

In this edition of Inside the Playbook, we are going to look at the very basics of Pass Protection schemes

Share All sharing options for: Inside the Playbook - Pass Protection Schemes

One of the big issues Michigan has been having is in pass protection. If I went into all the complexities and calls of all the different pass protections, you would quickly realize why young players have trouble with this part of the game (to go along with the vast complexities of the run game). There is a reason that offensive linemen are often considered the smartest guys on the field. Well, we're going to go over the basics just to try to get you up to speed a little bit. For briefing sake, there are three different types of blocking schemes: man, gap (zone), and combination.

Man Blocking
BOB. Big on Big; Back on Backer. This is a man blocking scheme that is optimal for many teams because of its ability to get a hat on a hat, an offensive lineman on a defensive lineman, and a back on a preferred LB (if a back is in to block).

First let's look at a world where 5 person blocks exist. Whoever is the uncovered lineman is will be the "double read" blocker. The OL always wants to work to protect against the most immediate threat first. Who that is may depend on defensive tendencies or personal preference, but we're not going to get into that in great depth in this article.

The Big on Big concept will always work to "half-man advantage", that is, a non-center offensive lineman will block a defensive lineman that is lined up directly over top or shaded over him (half-man). Whoever is the bubble offensive lineman (doesn't have anyone over him or shaded outside of him at the snap) will work with the person inside of him (typically an OG and center) to the MIKE (MIKE as defined by the offense, not necessarily the MLB). The center doesn't necessarily follow the half-man concept, he will make a right or left call and that will dictate the blocking scheme 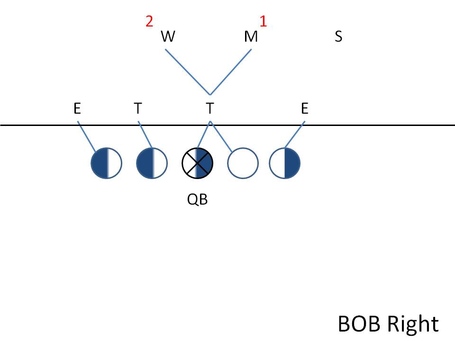 Notice here that the OG and the OC can work together to pick up the NT and either the MLB or the WLB. In a 5-man blocking scheme, this is a 2-on-3 blocking scheme that can pick up the entire DL and one interior blitzer. It is important to note though that if both LBs blitz, they can't both be picked up, and must be accounted for with a hot read. 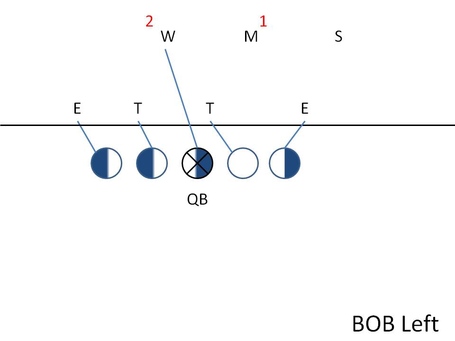 Notice that on the left call, the backside LB is now is no longer tracked. However, the offense now can ensure that the MLB is picked up by an offensive lineman. So these calls will be made based on tendency, defensive strength, offensive strength, and offensive play call.

In the man blocking scheme, the OG may have to make a double read from inside to outside, or whoever is the most immediate threat to the lesser threat. That means, if a LB is walked up on the edge, a "tough" call may be made by the OT (if there is no extra edge rusher, a "soft" call can be made). With that tough call, the OG will abandon his inside double read (the 2-on-3 described above) and make a double read from immediate threat (depending on offensive scheme, play call, defensive tendencies) to next. 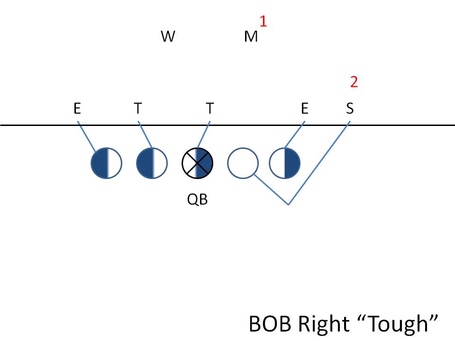 By adding a TE or a RB or both (or 2 RBs), each blocking assignment can likely be turned into a 2-on-2 BOB blocking assignment. This is what Michigan has been trying to do. You can get by with 6 and 5-man blocking schemes, but one or two hot reads are required to be installed within the offense to protect from potential free blitzers. This adds to not only the complexity of the blockers (who is left free), but also the QB, WRs, and TEs. For every potential free rusher there must be the potential hot read to fill the void they left. That is the only way to account for them.

But by going to a 7-man blocking scheme, the only way the defense can force a hot-read is by sending a secondary defender and thus playing cover 0 behind it, which is a proposition most defenses don't want to go to. This is why Michigan has been running mostly 7-man blocking schemes, so that they weren't forced to run as many hot reads and further complicate their offense (there will, of course, still be hot reads potentially, but they are relatively uncommon). 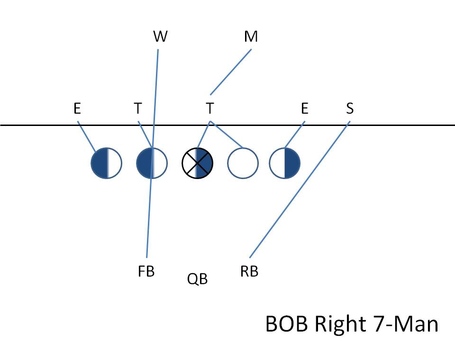 Note here that if they specifically wanted a OL on one of the LBs, they could call out the OL combo and have the FB pick up the other LB (FB should be able to step up and across to defend far side A or B gap). This can be done with many 7-man blocking schemes, and you'll design/call your pass protections to get favorable match-ups, to match tendencies, etc. 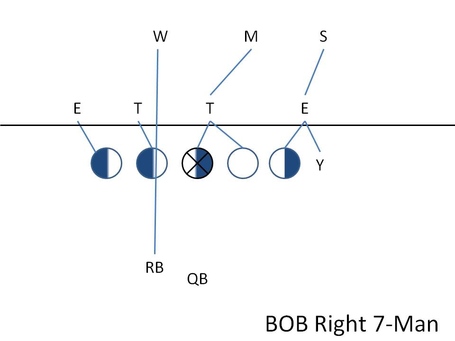 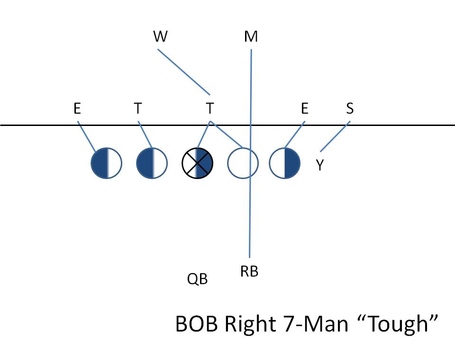 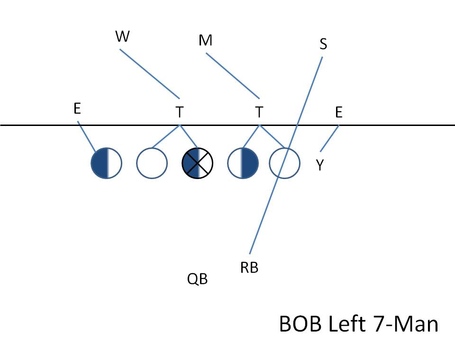 Gap Scheme
There are really two types of common gap schemes: slide and turnback. Turnback is a method of protecting against the slant, but we won't cover that in depth here and instead focus on a slide protection. Turnback is typically a backside scheme, while slide is typically a frontside scheme. Anyway...

Slide protection takes some of the complexity out of blocking assignments. Rather than have to pass off defenders and try to pick up certain combinations of potential defenders, the blockers will simply defend a gap. Typically, at least a 6th blocker will be added to any slide in the form of a RB to the backside. Typically you'll slide away from the shade in an even front (though, again, defense, personnel, tendencies, etc). 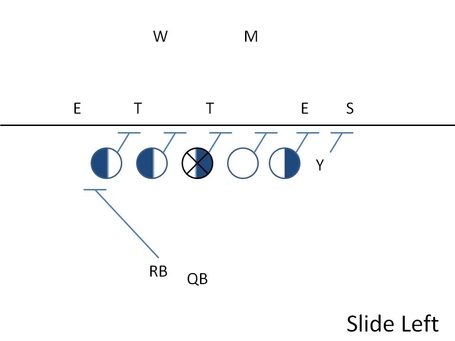 It is important that the OL doesn't chase. If a defender isn't attacking vertically then he's probably shooting for another gap, and just as likely another pass rusher is coming to fill the gap he just vacated. Blockers will lock on to the first gap threat while the backside will have a dual read. Unfortunately, this dual read can include trying to pick up a DE. This makes this a potential match-up issue. Yes, the protection is easier for the OL, but the block can be much more difficult for the RB. Typically this will only be used for a 3-step or quick-5-step drop.

FWIW, the direction of the RB indicates the "frontside", while away from the RB is the "backside". 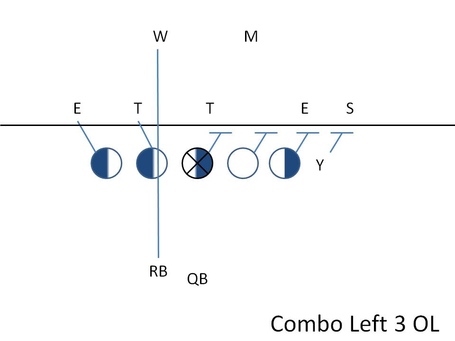 So how do you make the distinction between the "half-slide" side (away from call) and the BOB side (to call)? It is determined by the first bubble from the playside. This will determine the difference between a 3 or 4-man half slide. 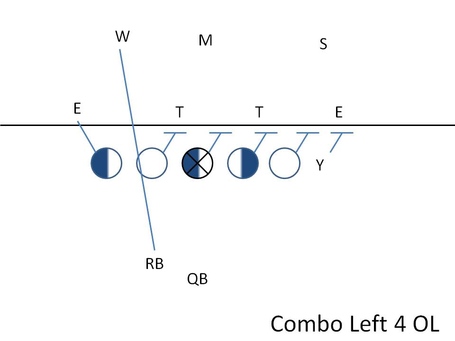 RBs will read this inside out to the playside. I talked earlier about a dual-read for the OL. This also prevents that and allows the RB to make the dual read (in these examples, he will dual read the LBs in case of a twist of loop blitz, and either pick up the one playside, or if both go playside, the most imminent threat). This is a bit easier as he starts a bit further off the LOS.

Conclusions
So these are the very basics of very basic drop back plays. That don't include all the blocking calls. They don't begin to look at technique of picking up different pressures, let alone basic pass blocking technique (next post on pass pro). They don't talk about the hot reads. This is all very simplified. Yet imagine doing it in real time, at full speed, seeing all these things as quick as is required or being matched up against people that are much larger. It's not easy, and this is intended to make it look easy so you can understand it. This is why it takes time for an OL, both in terms of knowing their assignment and just how to work with those around them. This is one of many reasons that OL is really, really hard.