Michigan State 29 - Michigan 6: You Brought a Knife to a Gun Fight

Michigan's day is full of negative plays and sacks, and the Wolverines can't muster enough offense to keep with Michigan State.

Share All sharing options for: Michigan State 29 - Michigan 6: You Brought a Knife to a Gun Fight

We knew Michigan State's defense was great coming into this game, and we knew that Michigan's offense was a boom or bust unit.

What we didn't know was just how it would play out when Michigan State's defense was able to throw all manner of stunts, blitzes and rushes at Michigan's young interior line.

We know now.  Michigan suffered sack after sack, moving backwards in huge chunks, killing drives, and losing the field position battle decisively.  Devin Gardner was under fire all day long, taking nine sacks for 49 yards and getting physically beat up.  Despite making some nice throws to Jeremy Gallon, Devin Funchess, and Jehu Chesson, too often he ended plays in a pile of bodies.  This is how it looked: 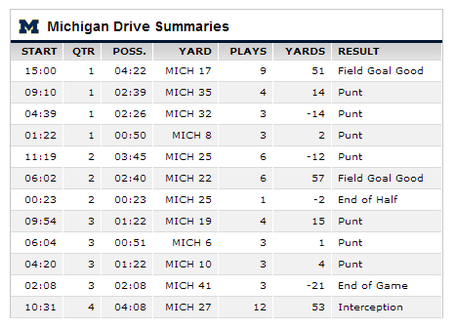 The story of this game was the Wolverine offensive line's complete inability to hold up against the MSU rush.  Michigan never really had a chance on a day when the game was still a 10 point affair in the fourth quarter.

Much like Michigan's offensive meltdown last year against Nebraska, the UM defense did all it could to keep the game close despite being constantly behind in field position.  The Spartans scored just one touchdown in the first three quarters, with four three-and-outs forced and one turnover.  Michigan was within striking distance until long after it mattered.

For what it's worth, Gardner had a pretty heroic day given the constant barrage of contact he took.  Gallon was also impressive, and Jehu Chesson made a nice adjustment on a deep ball — something he struggled with earlier in the year.

This one doesn't feel very good for a lot of reasons, but given what we know about Michigan's deficiencies coming into the game, it isn't terribly surprising against the best defense this team will see all year.

Keep your Borges bashing to yourself unless you have a salient point that doesn't rely on some variation of typing "scoreboard" in all caps.  No, Michigan shouldn't scrap it and play Morris and Green from here on out.  No, the defense isn't 2010 level awful.  Things will get better, even though it doesn't feel like it.

Tread lightly, folks.  I've got an itchy trigger finger tonight.  Keep it clean, respectful, and constructive in any criticism, or the ban hammer is coming out.

(Editors note: here is something to make everyone feel better