In this article we look at several of the things OSU will throw at defenses from the same initial look.

Share All sharing options for: Inside the Playbook: OSU's Inverted Veer Package

Ohio State does some interesting things within their offense that make it difficult for defenses to key them correctly. For one, they effectively mix up zone blocking and man blocking schemes, especially power blocking as of lately. In this post we are going to look at 4+ different plays which all utilize and inverted veer look, and explain why it is so difficult to stop them on offense.

Inverted Veer
I'm going to be a bit lazy and copy and paste a little. If you want to read on about the inverted veer there are several links that I am applying to these words.

Inverted veer works with a Power O blocking scheme. Power is a type of man/gap blocking scheme, while "O" indicates the pulling of the backside guard. A simple power play looks like this. 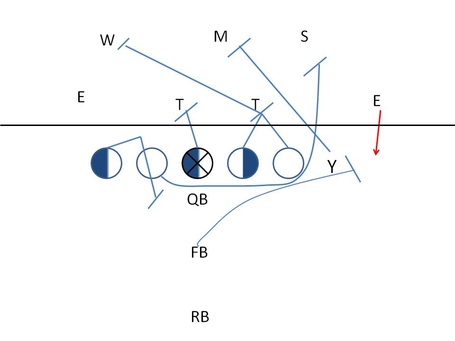 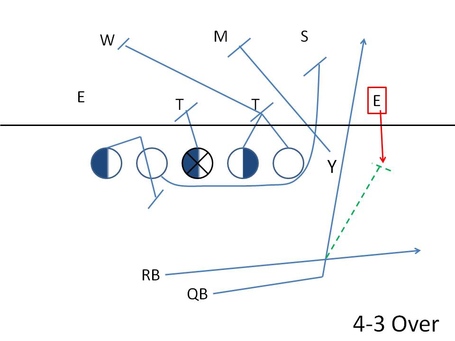 For the most part, OSU won't run this with Hyde, but instead bring down a slot receiver to run the outside zone and outside run style of plays.

Lead Inverted Veer
I discussed this at length here. At times, OSU will use Hyde as a FB and run it exactly the same way. 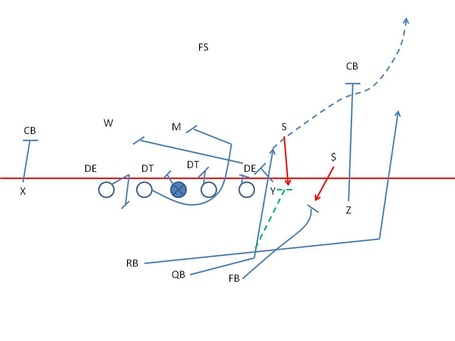 Nearly just as often they'll run it with a wing. The wing will behave exactly the same as a FB and make the exact same adjustements as a FB would in his power blocking scheme. 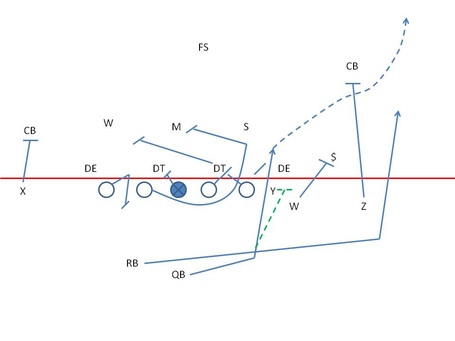 The purpose of this, in short, is to add a second lead blocker to the mix. This can allow for things such as picking up a leverage player to the playside, as well as getting out to a secondary defender so that that player can't fill in run support.

Counter Inverted Veer
As I described the inverted veer as power blocking from an option look, let's first look at how "counter trey" is blocked. "Trey" is a bit of a misnomer, as there often isn't a trey block, but it is the most common type of double team that comes from this blocking scheme and thus it is called trey. 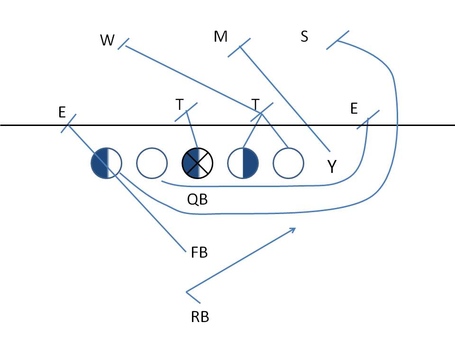 Well OSU is running this by using the read option like the FB again. They are using the read to block the backside DE. In general, OSU will pull the BST and the C. The reason you pull the C is for multiple reasons: he's closer to the playside and will be more effective sealing the EMOL; the play is run from gun so it is easier for the C to pull compared to the play being run from under center; it messes with the defensive keys by not pulling an OG as you typically would to the playside. 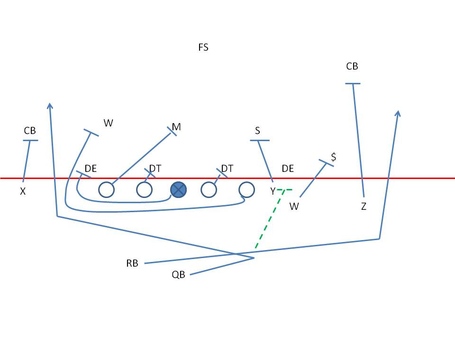 Now this makes the read a bit more indirect. Yes, the read is the same, if the EMOL crashes you hand off, if he contains he is essentially blocked and you keep. That said, the QB's eyes are not in the area where he'll eventually be running, making the read indirect compared to where he is eventually going.

But like Counter Trey, it takes advantage of fast flow from the backside so they can't overload the playside.

Now, it's interesting to note that Michigan has run what is a standard counter power scheme from an inverted veer look. This only pulls one player (the BST) and actually blocks the EMOL (because the FB on a counter power play will counter step and lead for the RB). Different philosophy, often something that true pro-style, I-form schemes will run both of once the blocking has developed enough.

Inverted Veer Pop Pass
One of the things that is often brought up as a constraint off the inverted veer is a pop pass. While some teams at lower levels will run a pop pass to the playside (as teams would run pop passes from the old wing T: between the outside run threat (WB) and the inside run threat (FB) where the defense is split).

The problem I have with this, and I imagine many college coaches have, is that this doesn't mitigate flow and is a rather risky proposition. For one, LBs are flowing inside out, especially in a spread scheme where they are more often responsible for outside leverage (whereas in the wing T days it was typically an OLB or a secondary player that could be easily identified). This means that a LB from the middle could be running from the inside-out and incidentally undercut the pop pass. Depending on how the DE plays, even the backside pursuit could be run right into the pop pass and be put in a position to properly defend the run and the pop pass. On top of that, you have safeties coming down in run support from various positions (again, often more unpredictable positions than from a wing T formation), and this makes this an unnecessarily dangerous pass.

Teams like OSU will actually run the pop pass to the backside. This is away from flow and thus is often safer and more open. The downside is that it is away from the viewing window of the QB, as in, the QB either will sell the inverted veer with his eyes and throw the pop pass relatively blind (pass protection is essential to do this so that you aren't completely rushing the read) or you don't sell the fake and take your eyes directly to the pop pass window, but this allows LBs to follow the QB's eyes into the pop pass window. Ideally, you take the former of the two options. 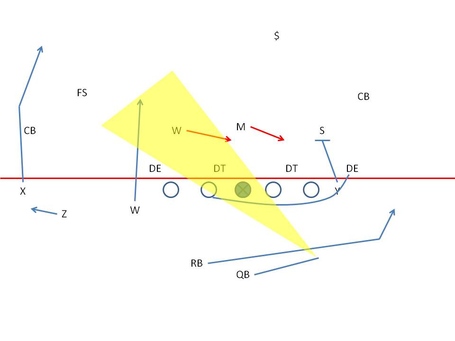 I didn't have good video of OSU running it, so here is a video of the Philadelphia Eagles running it.

Inverted Veer Play Action
There are also longer developing plays here which will be blocked similarly to the inverted veer. The difference here is that the player that is typically the read will be blocked by pulling OG. This requires players more experienced at pass protection and a consistent run threat from this look, but does help sell the inverted veer action (if the inverted veer action isn't sold then the play will quickly be blown up in the backfield as the player that is often the read play will have a free rush at the QB).

Obviously there is more than one passing route structure that can be run behind the inverted veer action. Here is how OSU will typically run their routes behind the play. 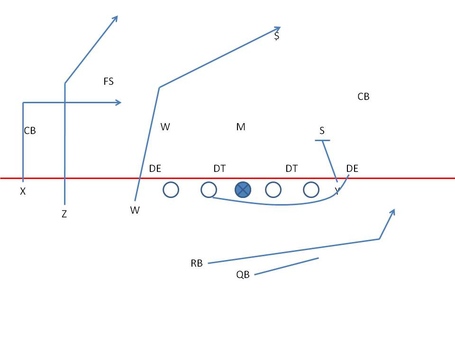 Conclusions
So what you see here is a complete inverted veer package that is based on man blocking. Essentially, you have your Power O play, you have a Power O with an extra blocker, you have your counter trey package, you have your quick hit pass, and you have your long developing deep pass. All this is designed to mess with the defensive keys, but there are still keys to be read. It is fundamental that the defense remains disciplined against this package, or else it will be exploited quickly.