It's bowl season here at Maize n Brew, and we've got the run-down of all 35 bowl games for you. Today we'll take a detailed look at the six bowls before Christmas, examine their implications on the college football landscape, break down key matchups, and lie about what's in each preview.

Also: Don't be shitty. If you haven't signed up for the Maize n Brew Bowls You Care About Pick ‘Em, do so now!

Quick Summary: Washington State succesfully parlayed noted equipment shed enthusiast Mike Leach's 3-9 inaugural season into a stunning 6-6 second go-round. Clearly, this is a program on the rise. The key matchup here will be Washington State's vaunted rushing attack against the crippling ennui that comes with playing in a bowl game named after a bulk-t-shirt manufacturer well before Christmas.
This Game, in a GIF: Mike Leach's fever dreams

Any Redemption? There's an excellent chance Mike Leach will stab someone with a cutlass.
Drink Of Choice: Absinthe. The only way to get the full Mike Leach experience.

Quick Summary: Royal Purple makes motor oil. If you knew that, please email Zach to claim your prize. He only opens emails with the subject line "Meet Sexy Singles In Your Area NOW!!!" so please bear that in mind. Apparently motor oil is a tremendously competitive industry, which is strange, because they're paying USC to play in a bowl game. Man, it feels good to see USC in a bowl game on 12/21, doesn't it?
This Game, in a GIF: This oughta remind SC fans who they could have had at head coach

Any Redemption? Hope Derek Carr puts 500 yards up on USC and the Trojans finish with a losing season. Yeah, that'd be nice.
Drink of choice: None. Instead, pour one out for Lane Kiffin - running USC and Tennessee into the ground means you've got a free one on MnB, coach.

Quick Summary: I honestly didn't know these teams had football programs. I have a friend that went to San Diego and assumed it was SDSU. It's not. It's also not UCSD. Which has me stumped. I can't make fun of Buffalo because they destroyed UConn, 41-12. The transitive property of college football makes me shudder at the thought of a Michigan-Buffalo matchup.
This Game, in a GIF: Heh. Totally worth it.

Any redemption? Like blue turf? If not, change the channel.
Drink of choice: I've had a hard time finding Bells' Sweet Potato Stout this week, so in keeping with the early bowl game tradition of drinking hard and often, give some potato vodka a shot.

Quick Summary: These folks clearly went for the ticket sales. Aren't bowls a time for teams to, like, travel? Tulane plays a nominal home game against the team with a top-5 nickname in college football, behind only the Furman Paladins, SLU Billikens, and the Anteaters of UC Irvine.

This Game, in a GIF: So lazy it's not even animated. H/T NatGeo. 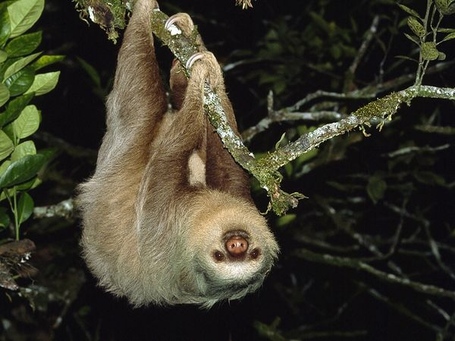 Any Redemption? None. This one pisses me off.
Drink of Choice: Whatever you can reach from your couch. Seriously, the laziest bowl of the year.

Beef 'O' Brady's Bowl: Seriously, This Is Getting Ridiculous

Quick Summary: I feel like ECU always pulls an upset of Virginia Tech even though I think they only did it once. The Pirates are Mike Leach's dream job. I have no other bad jokes to make, but I feel bad that these teams have to play at the Trop. Yikes. Frank Solich to Texas to replace Mack Brown because Nick Saban said no and is staying at Alabama. What other keywords can I use here to increase SEO and pretend this game doesn't exist? That's how I feel about this game.
This Game, in a GIF: How to avoid a sack by running backwards 20 yards:

Any Redemption? The only winner in this game is Beef O' Brady's, which means we all lose. It's either a brand of chili or the world's most desperate small regional faux-pub chain. I'm voting on the former.
Drink of Choice: A Yelping of Beef O'Brady's says they have "great deals on Guinness" so let's just go with that. mmm, mass market beer.

Quick Summary: In the early bowls, this is the best matchup - very little defense will be played. Realistically, most of us on the East Coast will be anxiously awaiting Santa and in all likelihood already in bed. For those of you on the West Coast, this'll be a shootout. Still baffled by Petersen leaving for Washington. It's not a better gig, right? Oklahoma State went from presumptive Big Twelve champion to this after Oklahoma played spoiler. That can't sit well with the Cowboys, who are something like 12-80 against Oklahoma lifetime. Still, a trip to Hawaii for Christmas is a nice consolation...
This Game, in a GIF: Oklahoma State head coach Mike Gundy has the rare distinction of being both a man, 40, and the only active head coach in the NCAA to star in a Disney movie.

Any Redemption? Plenty. Santa's coming, so be good, girls and boys.
Drink of Choice: I really don't like eggnog, but i think spiking it with bourbon will help hasten the arrival of Santa. Hustle down the chimney, please. Bring me some bowls worth watching.

Coming soon: Part 2 of the Bowl Survival Guide - The Games Before Michigan Plays