In this post, we will look at how Michigan can use a set of their base plays to attack some of KSU's tendencies and weaknesses on defense.

By most measures, the Wildcats appear to have a pretty good defense. According to advanced statistics they fall back into the average range. After watching them on film, I tend to lean toward the latter mark. While they can force offenses into so unfortunate down and distances, there appear to be some good ways for Michigan to get preferred match ups if they continue to execute in a manner similar to the OSU game. In this article, we will look at how Kansas State plays their defense and how Michigan can take advantage of some of KSU's weaknesses.

Kansas State Defensive Primer
The Wildcats prefer to run a cover 4 defense, but they will break out some single high looks (cover 1 and cover 3), especially behind the blitz. They'll mix in some 4-3 Under fronts against 21 personnel-type groupings, and will run Over schemes when teams try to spread out their 4-3. More often when teams put 3+ WRs, KSU will go to a nickel defense without much hesitation.

On 3rd and long they do tend to blitz, mostly from the edges. I doubt that'll necessarily be the case against Michigan (after watching Michigan tape, I'm sure they'll send some internal blitzes), but it should be understood how the defense will generally rotate from any blitz because of the fact that they tend to go to single high looks. Their flat NB tends to sink quickly, so outs are dangerous, and instead QBs should be focused on attacking the LBs in coverage, the LBs generally struggling to drop into appropriate locations.

The LBs are generally over-aggressive off of any initial run action. Their DL tends to favor slanting a lot in order to beat blockers into gaps. This forces the LBs to be even more aggressive as the focus is less on maintaining double teams at the point of attack and instead more on getting penetration with the front and fast flowing behind it.

Inside Zone Run
The strength of the inside zone run is that it is a fast hitting scheme with a designed cut back. Kansas State has struggled at the DT position. With how they heavily slant, it tends to be a win or lose situation for them on the interior, and rarely do they stalemate.

If Michigan's interior OL can continue the progress they made in their run blocking from the OSU game, and can latch on to KSU DTs, they can wash them out as the DTs tend to struggle to anchor or get good leverage at the point of attack. This leads to them being pushed beyond the play or back into LBs. With fast flowing LBs, this commits the LBs to gaps and sucks them into the wash, leaving open quick hitters and cutbacks. Here, watch the two DL toward the bottom of the screen.

Hitch; then Hitch and Go
By at least being effective running the ball, and establishing the threat, that forces the Wildcats to bring an OLB back inside the box to help out against the run and fill the cutback. 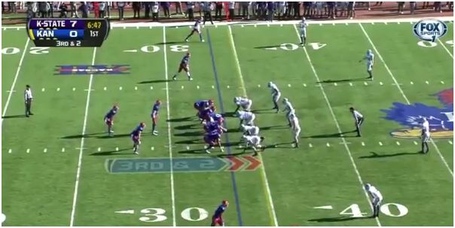 Even when KSU doesn't actively bring the OLB inside, it does cause the OLB to react quicker to a run look from the EMOL. The OLB in Kansas State's cover 4 will read the TE or OT: high hate = pass; low hat = run. They will tend to cage or jam the field DE (meaning line up the DE directly over the offensive EMOL) and slant away. This allows the OLB to have outside C/D gap leverage and become a more active part of the run game (though any outside release by a TE or drop by OT can also hold the OLB as he sees high hat and initially thinks pass; there were several times that the OLB caught the tackle because of this hesitation).

But this begins to isolate the DBs in space. Either the safety over the #2 or the CB on the outside. The CB technique from the Wildcats isn't up to Michigan State's standard, and they don't always resort to press coverage. In fact, they tend to play soft on the outside in order to reduce the possibility or winning over the top. What this does is allows Michigan to threaten deep and get open on come back routes on the outside.

And against cover 3 as well, as KSU starts to try to bring extra bodies down in run support:

Add in PA and an initial down block look from the EMOL and you have really isolated the DBs in one of Michigan's favorite ways.

Once this is set up, the hitch and go opens up and Michigan can win over the top.

3x1 Formations
When KSU goes to their nickel package, they line up against 3x1 formations (3 receivers to one side; 1 to the other) in a distinct way that isolates their CBs. 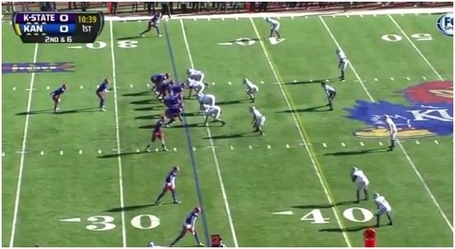 The OLB will carry the #3 up to the FS. He will also try to prevent any crossing route underneath. But this opens up everything to the outside and puts those DBs on islands. With Michigan having the quicker Gallon, who can work over the top on the fade, can work back shoulder fades, and is great at coming back to the ball, as well as Funchess on post routes and over the seam, this makes for a difficult match up on the outside.

Here's Michigan running a double post. Note that this is a 3x1 formation with the TE staying in to block. This would likely suck the OLB in and leave leave the WRs with isolated match ups.

It also draws the coverage outside and gets them playing the receivers, both the CBs and safety. This means if RBs can burst through the first and second level, they will have ample room to eat up yards before the DBs converge. On top of that, if Michigan's QB is still a run threat, this puts the OLB in a position where he is likely uncomfortable handling the run QB run. Roll outs with the #3 in the flat become even more difficult to maintain outside leverage and cover the receiver.

Conclusion
The nicest part of this setup is that it doesn't require Michigan to resort to their more complicated schemes. Many of these things can be accomplished using plays that they ran last year when DG first came in for Denard, meaning it's their base set up plays and either DG or Morris can run plays that take advantage of some of KSU's weaknesses. Even KSU's blitz scheme tends to tip their coverage so that the QB has an understanding of coverage flow patterns. Throw in some tunnel screens, some misdirection runs, etc (waggles might be great plays for Morris in this one with KSU's fast flowing LBs) and Michigan can move the ball, but it requires them to first establish the point of attack on the interior. As has been the case all year, this is the main unknown entering the game.