Inside the Playbook: Michigan's 2-pt Conversion and the Triangle Concept

We look at the theory behind Michigan's 2-pt Conversion attempt

Share All sharing options for: Inside the Playbook: Michigan's 2-pt Conversion and the Triangle Concept

There has been much consternation about the 2-point conversion play call by Borges last Saturday. In this article, I want to at least get a basis behind the theory of the formation and the playcall. In part II we will go deeper and figure out why it wasn't successful and what were some other potential plays for Michigan to run out of the same formation. 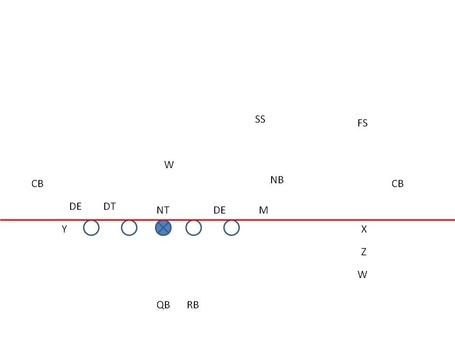 The reason you run a stack concept is that it sets natural screens on DBs to give receivers free releases into their routes. While these routes may have slightly more delay due to being lined up further in the backfield and behind another receiver, the timing is much more consistent than receivers fighting press coverage.

So by stacking the receivers you are improving the timing of the play. You are also aligning in a way to naturally move into rub routes post snap. Unlike a bunch set, the pick is slightly less natural and the timing is a bit slower, but the receivers can utilize the receiver in front of them to go in either direction. So you sacrifice speed to a degree to increase route possibilities going and consistency going from a bunch to a stack. Meanwhile, a standard trips formation would allow receivers to get into route concepts earlier (because they are already spread out), but the timing is easier to disrupt off the LOS and it becomes more difficult to set up natural rubs on the defense. This tends to make man coverage a bit easier and provides a little less confusion to a zone, but it also spreads the defense out and allows for slightly more route concepts and the possibility of getting into routes a bit quicker.

Michigan motioned across the formation to figure out if the defense was in zone or man. This helps both the QB and the WRs. It helps the QB to properly go through his progression. It helps the WRs to know how to run their routes. The stack is to set up natural rub routes, overload some zones, and decrease variability in the timing of the play.

Play Design Inside the Box
We are going to start near the snap to talk about what is happening there. The TE is staying in to block. Realistically, this close the end zone, the QB will only have time to go through a progression to one side of the field. With the field condensed, spreading the field may give the QB more options pre-snap (based on pre-snap reads) but it will not give him more option post snap. In fact, it likely gives him fewer snaps because pressure gets home faster. So there are positives and negatives to both, certainly.

Spreading the field gives you up to 4 options pre-snap (it's rare you'll get to progression 3 while spread out) and potentially 2 on each side. But the reads must be quick and immediate. The route can't be complex; it must be quick and simple. It's similar to Akron's final play against Michigan. Quick read and someone was breaking open, but pressure got home before it could develop.

Meanwhile, if you believe in the route concept on one side, a 7-man protection can provide ample time to make up to three reads (though two is still very realistic). But it's narrowed to two immediately post-snap, not necessarily pre-snap. It also allows for more complex concepts and routes to break open. So positives and negatives.

The play action away from the stack set is intended to pull a LB away from the field side, allowing for the WRs to operate in a full half of the field (the ball was on the hash). Combined with a QB run threat, it should hold at least 7 players in the box to defend each gap and defend each receiver. That puts 3 on 4 in half the field at worst (though you obviously hope for 3 on 3, likely with a defender wasted to the boundary).

Triangle Concept
Go to any football website, and most likely you'll find something about the triangle passing concept. Chris Brown (Smart Football) describes the concept very well (though, when he gets into specifics, he discusses a different play that utilizes the triangle scheme).

The insight behind the triangle is that the horizontal and the vertical stretch are combined to create a single straightforward read for the quarterback that provides answers no matter what the defense presents.

All of the major "new" (in relative terms) passing concepts are based on a triangle read. The weakness of the triangle stretch is that it's typically only possible to only get a two-man horizontal or vertical stretch, whereas with a true "flood" you can place three (or more) receivers across the field on a given plane to truly defeat a defense. This limitation means that a triangle can be throttled by certain coverages that rotate to the triangle side.

But all this is counterbalanced by the triangle's versatility: the route concept should result in a completion against almost any coverage, and, as will be shown further below, triangle stretches are also usually conducive to having a man-beating concept within them.

A true flood isn't realistic this close to the end zone, simply because there isn't enough room to operate. Meanwhile, a triangle concept is versatile against any coverage, fits within the limited space, and provides the QB a relatively simple read. Combine it with the fact that it only needs 3 yards, and you see why it is the favorite scheme of most pro-style (and most pass-based-spread) teams in modern football in those situations. 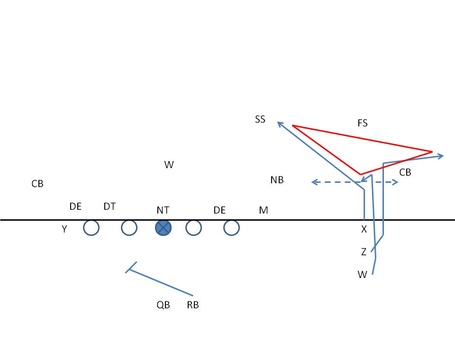 The X-receiver (Funchess) is running a slant to the goal post. This is the vertical stretch. It is also the first read against man coverage as slant, especially to the back of the end zone, is a very good man-coverage-beater.

The second route, by the Z-receiver (Gallon), is a corner/flat (run to open grass to the outside). This is a horizontal stretch. This is the first zone-coverage-beater. This can also be a man-coverage-beater if his coverage is coming from the inside because the X-receiver provides a rub.

The W-receiver (Dileo) thus is the 2nd read for both man-coverage and zone-coverage. He is also the hot read. He is provided with a rub from both the X and Z receivers. He is running an option route. With no inside help, his route becomes an angle route. An angle is generally a man-coverage beat verse outside leverage. By stemming outside initially, it gets the defender flat footed and moving outside, opening up room on the inside. In concept, coming from a stack set, this would work like a double slant against a standard man coverage. Now, if there is inside help, the W-receiver is essentially running a snag route. What this means is that he will run to the void in the defense (the outside release is merely to hide behind the receiver in front, providing a better rub) and hitch, and work inside-out. The QB will throw him open. This means that with inside help but outside coverage, the QB will throw to his numbers. If the outside, flat defender follows the Z-receiver, the QB will throw to the back shoulder into the vacated zone, or in other terms, throw the receiver open. The W-receiver is the 2nd read (outside of a hot situation), but the most likely target.

So in theory, with this combination of routes, you have 2-zone beaters (plus check to the Z-receiver) and 2-man beaters, with the option of working inside or outside with the third receiver. The concept should work against any coverage.

Conclusion
So this is the theory behind the triangle concept. In the next part, we'll do some film review and look at how OSU stopped the play. We'll also take a look at some of the other potential options OSU faced from that same formation.