Michigan's offense had a banner day against the Buckeyes, but for once this season, the defense couldn't keep pace. What happened to lead to this? We explore some of the breakdowns.

Share All sharing options for: What Went Wrong: Ohio State

Coming into the game Michigan featured one of the better run defenses in the conference, and while it looked like Michigan would struggle with Ohio State's deadly rushing attack to an extent, I didn't imagine it would get as bad as 395 yards allowed at 8.5 yards/carry.

Of course, it wasn't too hard to see it coming. Michigan was missing a couple key players on defense, including NT Ondre Pipkins, who would have been very valuable in this game (Ohio State used a lot of inside zone to take advantage of Michigan's softness inside) as well as James Ross III who is one of Michigan's better linebackers. It was nice to see Ben Gedeon and Joe Bolden step up in his absence, but Michigan could have used all the help it could get. But those weren't the biggest personnel issues, nor were personnel issues the only issue. So let's get to it.

The one personnel issue that was most glaringly obvious was at safety, where Michigan was forced to rely heavily on senior backups Courtney Avery and Josh Furman — both of whom inexplicably started the game — in part because sophomore Jarrod Wilson is in a large arm cast these days.

The two touchdowns from the first quarter provide great examples of just how bad Michigan needed good safety play against a team like Ohio State. The first touchdown consisted of Josh Furman getting caught flat footed against Devon Smith. Michigan has four defenders over three receivers. 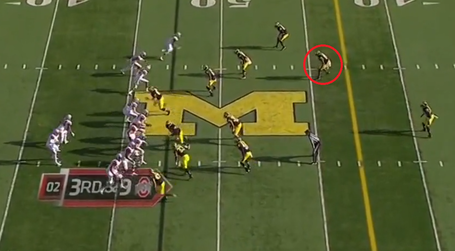 Inside that red circle is Josh Furman, who will have deep responsibility. I played safety in high school (poorly, I might add) and the one thing I remember is the hard and fast rule of "don't ever let anyone behind you." What does Furman do? 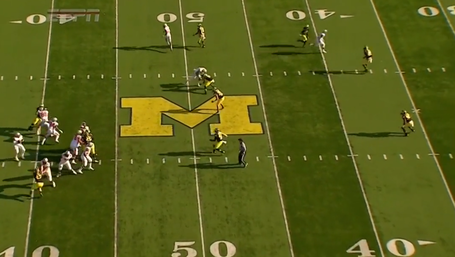 Oh sweet baby jesus, this isn't happening. You can see Furman now, standing on the hash, two yards deeper than Devon Smith, who is in a full sprint. Furman has yet to flip his hips to run. That is not how you do it. Later in the game, an underthrown pass will hit Furman in the back (at which point he will celebrate like he just broke up an end zone fade) and it will be almost the exact same thing. He failed to get around and run with the receiver, didn't look back, and fortunately was just in the right place for the ball to bounce off him.

Ohio State is primarily a rushing offense, but the beauty of this is that when you run the ball that effectively, you make opposing defenses freak out. Michigan got gashed all day long on the inside because it refused to gamble to try to pick up stops. Michigan didn't bring a lot of extra pressure and didn't leave its secondary exposed. Despite that, this stuff still happened because when you roll out inexperienced safeties against Ohio State, you're gonna have a bad time.

Straight Up Getting Beat

Sometimes Michigan did bring pressure. Occasionally it worked. Jake Ryan opened the second half with a nice TFL on Carlos Hyde (the second such play for loss from Hyde all year, which, like whoa). Those things can work, but the issue is that if you dial them up at the wrong time, Ohio State can take advantage.

Like late in the third quarter. Ohio State got the ball after a punt on its own 14 and ripped off runs of 20, 11, 17, 4, and 12 all in a row to move into Michigan territory. The Wolverines respond by sending Raymon Taylor off the edge. This would work great if Ohio State was still going to run it. Instead, the Buckeyes come back with the best play in football: four verts. 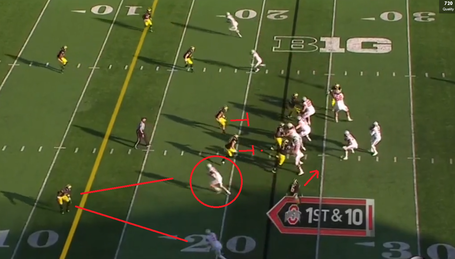 There is absolutely nothing to like about this play. You can see Raymon Taylor tearing off the edge on a CB blitz. Both linebackers are standing flat-footed looking into the backfield for run action. At the top of the screen Michigan is all set with two underneath pass defenders and safety help over top. At the bottom of the screen? Doom.

Thomas Gordon is ten yards deep staring down two streaking receivers. He has to take the outside and hope for linebacker help inside to carry Heuerman up the seam. This doesn't happen, Heuerman is wide open, and Ohio State gets what Brian calls an RPS +3.

This is what Ohio State's offense can do. It hits a defense with run, run, run and begs for some sort of run blitz or pressure to stop the onslaught. That sets opposing teams up for the counterpunch. I want to get down on the defense for this, but A) it is just a masterfully called drive by Ohio State. I mean, pulling out four verts here should be so painfully obvious, but at the same time after five run plays in a row its easy to freak out over number six. B) sometimes you guess wrong. The only way to beat Ohio State's offense without a defense like Michigan State's is to hope that your team can contain the big plays (Michigan couldn't) an call a few risky things like this to try and get the Buckeyes behind the chains and maybe create some obvious passing downs. Mattison guessed wrong, and I can't really get too mad at him for it.

Late in the second quarter Michigan is up seven and has given up a long drive that puts Ohio State just outside of the red zone. On first and ten Michigan gets good coverage down the field, but can't get any pressure home. Braxton Miller surveys the field for almost five seconds, rolls to his right, and takes off. Instead of corralling him for no gain: 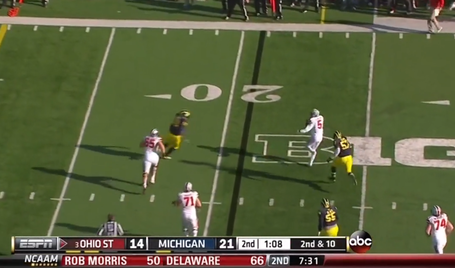 Willie Henry takes a bad angle. He doesn't try to hold the edge and give Frank Clark time to pursue from behind. Henry should try to make Miller cut up behind him, which would at least make Miller have to slow to cut and probably allow Clark to make the tackle around the line of scrimmage. Either that or Miller runs out of bounds knowing he can't get the edge. Of course with Henry being not nearly as fast as Miller, he needs to start shuffling down the line instead of attacking vertically. What does he do? 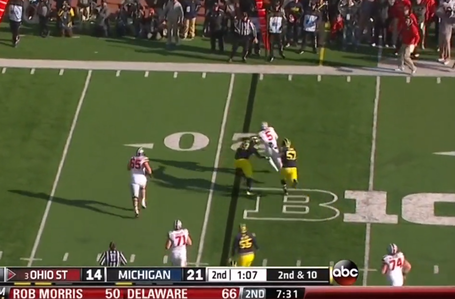 He goes in for the kill. Miller isn't forced to make a tough decision, which doesn't allow Clark any chance to make up ground. Then, for good measure, Henry doesn't get his helmet across Miller on the attempted tackle, which is easy for the quarterback to slip out of on his way to the end zone.

Granted, this play featured holding before Miller ever got to the flat, but Michigan still has to chop this run down at the line of scrimmage. Henry does everything right until Miller gets outside, and from there he lets Miller get the edge which is basically all she wrote.

Against Ohio State and Braxton Miller, it isn't easy to make plays by yourself in space. Just ask Courtney Avery: 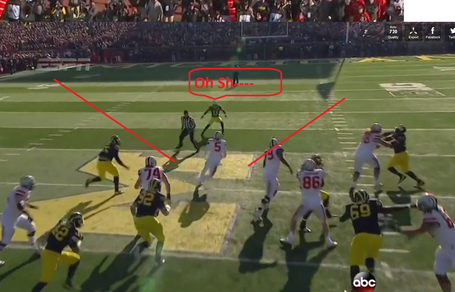 I'm not even mad. Miller can basically go whatever direction he wants, and Courtney Avery is supposed to make the tackle there? Whaaa? You crazy.

You don't tackle Braxton Miller in space by yourself. You try your damnedest to force him into a constricted area and hope for help. Willie Henry tried to be the hero.

The really unfair thing about Ohio State is that this offense isn't just a slice and dice you spread and shred outfit capable of attacking the field horizontally, using the quarterback on option runs and in space, and then pulling out four verts and leaving linebackers slack-jawed as the ball goes over their head. It is that with all of this, Carlos Hyde is there, pounding out seven yards per carry nearly every single time he touches the ball.

There isn't much else to say other than that. Ohio State has the luxury of running behind an experienced OL with one of the best backs in college football. Hyde ran for 226 yards on 27 carries for an average of 8.4 yards per. He doesn't have a 70 yard run in there to skew the numbers — his long was just 33 yards. He was stopped for loss once, the TFL by Jake Ryan to open the second half.

Carlos Hyde just consistently beat Michigan on the inside. And in all of that, he was the lesser of two evils. Had Michigan brought more players down into the box Ohio State would have simply screened Michigan to death with Philly Brown and attacked the thin coverage over top with Devon Smith (we saw how that worked out).

Michigan aligned its defense to contain those things and try to drag Hyde down before he got a first down nearly every single play. It worked, if "worked" simply means that he didn't get a first down every time he touched the ball. But it was far from ideal for the Michigan defense.

Really, that is the story of the game. Michigan's defense isn't quite advanced enough to really go after Ohio State's offense and win these one-on-one matchups in space, so Michigan had to play a little more conservative which opened up the pounding on the inside. That in turn made Michigan trigger happy and led to a few big plays when Michigan got out of position or tried something a little too cute that OSU was ready to exploit.

For most of the game Michigan was damned if it did, damned if it didn't. All of that makes the forced fumble that much more valuable, as that play broke serve and allowed Michigan to get back into it.

The good news is that Hyde and most of that offensive line is gone after this year, while Michigan brings back the vast majority of its defense.