MnB continues its breakdown of the 2013 roster with a look at a position that is rapidly becoming more talented: the tight ends. Can this young group help Michigan transition to a more pro-style attack?

Paskorz is one of the many leftover Rodriguez players who never found a true home. He was recruited as a defensive end and never found playing time, then moved to tight end when the depth chart became thin. He didn't see any playing time until the Massachusetts game this past season, and even then he was a special teams contributor. He'll be the oldest and least talented member of the group, and probably won't see any time with Funchess, Williams, Butt and Hill all vying for playing time. His only hope of seeing the field was as a blocking tight end, but Michigan now has a tackle-sized tight end in Williams and two others capable of putting on the weight needed to block. 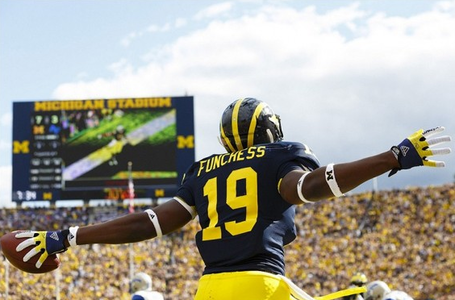 Funchess was one of my class of 2012 boom or bust players, and as of now it looks like he will boom. He was a four-star prospect to many scouting services because of his length and athletic ability. He flashed an elite ability to go up and get footballs that most receivers and tight ends can't get to, and although he wasn't a polished blocker he still had the space on his frame to add muscle and blocking strength.

Funchess played throughout this past season, starting off with touchdown receptions in two of his first three games. He tailed off toward the end of the year when Devin Gardner came in, but still finished with five touchdowns and a 15.6 yards per reception average on 15 catches.

Devin has one of the highest ceilings of all the players on the roster. He already runs faster than some of the receivers on the team, has a frame capable of carrying twenty more pounds of muscle, and has flashed great hands to top it all off. I expect him to weigh between 240 and 250 pounds when fall practices come around, making him an all-around tight end who can block in two tight end sets while still maintaining the speed to play outside on long downs. He'll be a mismatch nightmare for the remainder of his career.

Williams is an intriguing specimen despite his lack of athleticism. Michigan's move to a running pro-style system will require blocking tight ends who are capable of peeling off and catching wide open passes off of play action, and Williams fits that mold. He was a three-star recruit in high school who many saw as a tackle prospect because of his length and big frame. Hoke and company saw him as an athletic lineman capable of being a blocking tight end, so they plugged him in as a short down blocker in his first year.

Expect Williams to keep doing more of what he did his freshman year: block people. If Michigan can develop a legitimate running game Williams will be one of the reasons why, as he'll compliment athletes like Funchess and Butt with girth and strength. The coaches continually say that he's capable of catching passes, so he should catch the occasional pass off of play action when the running game is clicking. Williams could end up being a player who tips run if both Funchess and Butt develop the ability to run block. 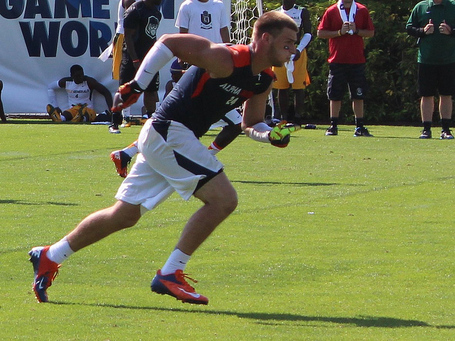 I saw Jake on campus the other day, and the first thing that jumped out to me was his height: he's definitely not 6'6", as I'm a bit over 6'2" and might give up two inches to him. But I digress.

Butt isn't the athlete that Funchess is, and he isn't as strong of a blocker as Williams. Somewhere between the two lies the skill set of Butt, who might be the best all-around prospect in the tight end group. His receiving ability is great but not elite: he lacks the explosion to beat safeties but is still capable of outrunning linebackers and out-muscling defensive backs for passes. His length is decent, and he has enough vertical explosion to be a half-notch below Funchess in the red zone. He'll top Funchess in the run game because he isn't as lanky and already weighs 235 pounds, so he'll probably be pushing 245 by the time fall practice comes around. Jake will see time throughout his freshman year in multiple tight end sets, and could eventually force Williams out of everything but the goal line package.

Hill is the only commitment in the class of 2013 who never received a fourth star from a single scouting service, making him the Mr. Irrelevant of the class. He came onto the scene when he played on the same passing league team as Shane Morris, and the two now have a solid bond. They also made countless connections on the field because of Hill's ability to find holes and haul in passes. He isn't going to outrun anyone or jump through the roof in the red zone, but he could contribute as a pass-catching tight end later down the road. His blocking needs major work, even more so than Butt, which makes him a near lock to redshirt.

I'll say this about half of the position groups on the team: it's talented, well-rounded and very young. The tight end group is comprised of one junior who probably won't ever see legitimate minutes, two sophomores who have already played plenty, one freshman who will play his freshman year and another who will help create depth for the future. The group also has every combination of skills that a tight end group can have: Funchess is an athletic jump-ball tight end who needs to develop his run blocking, Williams is a run-blocking tight end who needs to develop his hands, Butt is capable of doing both, and Hill is an above average athlete who's there for depth.

The combination of different skill sets makes this group a dangerous one. Funchess and Williams will both come into 2013 prepared to play at higher levels, and if Funchess is bigger the Wolverines will have a powerful one-two combination in multiple tight end sets. Funchess should see his minutes increase throughout the season as his run blocking improves; he'll remain the biggest receiving threat on the entire roster and should be on the field for the vast majority of passing downs. Williams is the complete opposite: put him in on early downs and goal lines situations to bruise defensive ends and linebackers. Jake Butt should also find minutes in goal line packages and passing downs, especially if Michigan feels like it can create mismatches on passing downs with two tight ends in the game.

As far as statistics go, I'd expect Funchess' numbers to rise significantly, Butt to end the season with the second most receptions by a tight end, and Williams to get a few easy catches off of power play action. Funchess needs to be utilized in every way, whether it be in the traditional tight spot, the slot, outside, or in the H-back position. He's a mismatch waiting to happen and it angered me that the staff didn't utilize him more toward the back end of last season. Double-digit touchdowns is a completely realistic goal.